A pen and a lighter might seem, to the average user, like everyday tools. You probably wouldn’t think twice about either one in terms of the design and technology that go into making them work as you jot down a note or light up a cigarette or candle. But as S.T. Dupont demonstrates, a true dedication to craftsmanship and quality can transform an everyday object into a work of art or a family heirloom.

Founded more than 140 years ago, S.T. Dupont has a rich history connected to royal families and the aristocracy. But having a strong connection to the past doesn’t mean the brand sticks to a tried-and-true strategy. In fact, it is a dedication to innovation that has allowed them to stay in business for nearly one and a half centuries.

“For a brand to live for 140 years or more, you cannot always repeat the same thing. You need to keep surprising with a high level of creativity while maintaining the highest quality.”

As Yann Gahier, President of S.T. Dupont Japan, explains, “Every era and every year we adapt to the taste of the consumers. We are always trying to renew ourselves but preserve our DNA.” This has led the company to be very sensitive to changes in consumers’ lifestyles and habits, and adapt accordingly. One early example of this adaptation came at the end of World War II, when people stopped traveling as much. Travel goods were initially the core of the brand’s business at that time, but they shifted their focus to lighters. The lighter business boomed in the years following the war, and S.T. Dupont later expanded to pens when Jacqueline Kennedy requested one to match her favorite Dupont lighter. Prior to this request, the company had never made pens, but this willingness to respond to the needs of their customers is what led them to thrive in that market.

How you adjust to challenging times as a business is a strong indicator of how successful your business will be, according to Gahier. In 2000, the anti-tobacco campaign came as a major challenge for the company—lighters had become a large share of the business. S.T. Dupont once again adjusted with a revival of their leather goods, and extended their brand to a wider range of consumers. Thanks to this organic development of their product line, S.T. Dupont officially specializes in four areas—lighters, pens, leather goods, and accessories—and have branded these products, respectively, “The Art of Fire,” “The Art of Writing,” “The Art of Travel,” and “The Art of Seduction.”

Collaborating with artists is one of the ways the brand livens up its collections. By teaming up with designer Karl Lagerfeld three years ago and more recently with Eiichiro Oda, creator of the immensely popular manga, One Piece, S.T. Dupont presented themselves to an expanded, and much younger, customer base.

After the Lehman Shock in 2008, the brand further rejuvenated their image by creating a line that was affordable to people with less disposable income. The Mini Jet Lighter starts at ¥13,000, making it an accessible lighter, but one that still holds to the brand’s standards for high quality. It also allows the brand to engage their customers with their products early and evolve with the brand. “Through the Mini Jet, we diversify, yet at the same time we initiate younger customers to the uniqueness of S.T. Dupont so they can aim for the iconic lighter in the future,” Communications Manager Aya Sugino explained. Shortly after this expansion of the product line, the brand created one of the most powerful lighters in the world: the innovative “Defi Extreme Lighter,” which can resist strong winds and light up at temperatures as low as –4°.

Although the brand is constantly evolving, S.T. Dupont maintains the spirit of the history they are proud of. “There is a strong unity between what we did before and what we do now,” Gahier says, “S.T. Dupont is always about taking inspiration from history, and building the future. We call it roots and wings. We are inspired from our roots—the roots of our history and what we’ve built until now—and build on the future with modern products.” But, at the end of the day, Gahier says, “We make sure that all of our products have S.T. Dupont DNA. That is really the most important thing.” S.T. Dupont’s signature bell sound as you flip the cap of the lighter, or the royal blue lining of its leather goods are some of the brand’s “genetic material” that the company will always preserve. 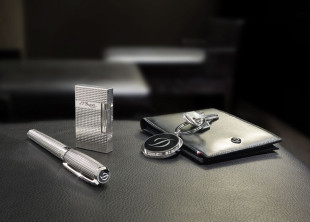 Their traditional lighters range in price from ¥70,000 to ¥300,000, but some of S.T. Dupont’s more intricate pieces can sell for ¥1.5 million, and the brand’s most expensive piece rings in at ¥70 million. The company launched in Japan in 1976, and has become a luxury household name, particularly for lighters. S.T. Dupont’s flagship store in Ginza and many high-end department stores around Japan carry the “The Four Arts” of S.T. Dupont. They will also feature pieces from S.T. Dupont’s upcoming collection for 2014: “Chivalry,” which depicts classic knights of days gone past and the armors of tomorrow.

“For a brand to live for 140 years or more, you cannot always repeat the same thing. You need to evolve with the world and keep surprising with a high level of creativity while maintaining the highest quality.” Gahier says. “S.T. Dupont is all about timeless elegance and refinement.”