As the 2013 J-League season gets underway, with curtain raiser fixtures this weekend, we take a look at some of the key players – both on the field and behind the scenes – and discuss with them some of the major issues in Japanese football today.

With no real stand-out teams, the J-League is one of the most open football/soccer championships in the world, meaning title contenders could come from just about anywhere.

Last year Sanfrecce Hiroshima pipped Vegalta Sendai to the championship, with many of the so-called favourites struggling to live up to their billing. One manager keen to put 2012 behind him is Dragan Stojković. The man known as ‘Piksi’, who guided Nagoya Grampus (officially they’ve lost the ‘Eight’ part of their name) to their first ever title in 2010, was disappointed with his side’s 7th place finish, yet he knows things can change quickly in the J-League. 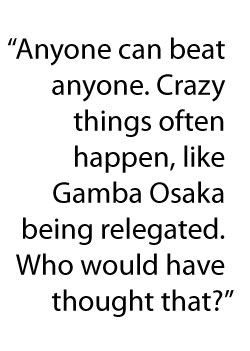 “You just never know what is going to happen in this division,” he tells me during the Kick Off Conference pre-season event at the Shinagawa Grand Prince Hotel, where he pulls no punches with his assessment of their lackluster 2012:

“Last year we were s**t, but we go in to this season believing that we can win it. It is the same for all the teams, anyone can beat anyone. Crazy things often happen, like Gamba (Osaka) being relegated. Who would have thought that?”

Having finished in the top three in eight out of the previous ten seasons, Gamba’s fall from grace has to go down as one of the biggest shocks in J-League history.

The fact that they were the league’s top scorers – with 67 goals, three more than champions Sanfrecce Hiroshima – made it all the more astonishing. The dizzying heights of their Asian Champions League success (in 2008) now seem a long way off, though they can take some encouragement from the fact that current J1 champions Sanfrecce Hiroshima and 2011 winners Kashiwa Reysol both had recent stints in J2 and came back all the stronger for it.

Gamba are not the only heavyweight team to have struggled in recent times. The country’s richest and best supported club, Urawa Red Diamonds, avoided the drop by just one point in 2011, while Japan’s most successful side, Kashima Antlers, ended the 2012 season in 11th; their worst ever finish.

Antlers have brought back Toninho Cerezo as head coach in the hope of reviving their fortunes; the former Brazilian international knows what it takes to be successful in the J-League, having won two titles during his previous reign at the club, between 2000-05. He is, however, expecting to face a more difficult challenge this time round.

“When I was last here, eight years ago,” Cerezo says, “there were three or four teams capable of winning the league. Now it is no exaggeration to say that all 18 sides go in to the new season with a chance. For that reason it is going to be very tough, but we are in good shape and feeling confident.

“Last year the side started really slowly before picking up in the second half of the campaign, going on to lift the Nabisco Cup. This time we need to hit the ground running from the get-go.”

Cerezo boosted his forward line with the signing of Brazilian striker Davi in January, for around €2 million (¥120m). It may not sound like a lot for fans of European football, but it is a significant amount in the J-League, the kind of money Shimizu S-Pulse coach Afshin Ghotbi could only dream of spending. 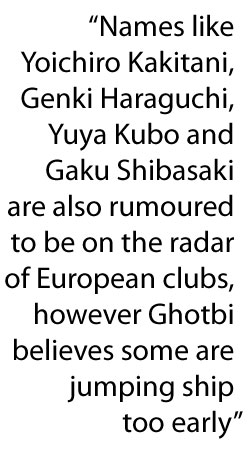 Since taking the reins at the Shizuoka-based club in 2011, Ghotbi has seen a number of established players, such as Shinji Okazaki (to VfB Stuttgart) and Jungo Fujimoto (to Nagoya) depart, leaving him with one of the youngest squads in the division.

Despite the lack of funds and experienced players at his disposal, the former Iran national team manager remains upbeat about his side’s prospects this season:

“I am very positive, I always feel this way,” says Ghotbi. “Some key players have gone since I arrived, but I believe the current squad is good enough to challenge at the top. This is a wonderfully run club with some fantastic young players and passionate supporters who are desperate to see their team succeed. As manager, the pressure is on me to deliver and that is something I thrive on.”

Perhaps the most exciting prospect at Ghotbi’s disposal is Hideki Ishige. The 18-year-old midfielder recently spent a week training with Man City, where he was given the chance to play alongside Mario Balotelli in the reserve side.

Ishige is one of a number of talented youngsters in the J-League tipped to move abroad in the near future. Names like Yoichiro Kakitani, Genki Haraguchi, Yuya Kubo and Gaku Shibasaki are also rumoured to be on the radar of European clubs, however Ghotbi believes some are jumping ship too early.

“I think it is great for Japanese football to see players like (Shinji) Kagawa doing well in Europe, but it is very important that they go at the right time. We had young Genki (Omae), who was a big player for us, scoring lots of goals and now he is on the bench at Fortuna Düsseldorf. I have no doubt he has the ability to be a success in Europe, I just wonder whether it was the best time to go.

If you look at someone like Park Ji-Sung, he moved to Europe after having starred in [the 2002] World Cup, joining up with a manager he knew well [at PSV], before making the giant leap to Man Utd. He is a great example for all Asian players looking to make the grade on the continent.”

Another concern for Ghotbi is the “lack of compensation,” that J-League clubs are receiving for their players.

Borussia Dortmund signed Shinji Kagawa from Cerezo Osaka for a measly €350,000 in 2010 before selling him to Man Utd two years later for a fee that could rise up to as much as €22 million, while many others are leaving on the cheap or for no fee at all. Some have said the lax attitude towards contracts might be one reason for this.

Clubs in Japan are clearly not doing enough to capitalize financially when their best players leave. The situation is great for European clubs in search of a bargain, not so good for managers here who are losing star names for nominal fees. No wonder Arsene Wenger recently described the Japanese market as both “very interesting and very competitive.”

According to Dragan Stojković, who lost key players Mu Kanazaki (to Nuremberg) and Kensuke Nagai (to Standard Liege) this January, there is not much a coach can do when a player decides he wants to leave.

“Some things are out of our control, they (Kanazaki and Nagai) wanted a new challenge and good luck to them. There is no point crying about it, we just have to move on. I am sure we can still challenge for the title without them.”

As well as losing many of the country’s top young players, the J-League is no longer able to attract big names from abroad.

The days of marquee signings like Gary Lineker, Zico, Hristo Stoichkov, Michael Laudrup and Dragan Stokovic are long gone. From a financial perspective, both the Chinese Super League and Australian A-League are currently seen as more attractive propositions for international stars.

Missing out on Alessandro Del Piero, who joined Sydney FC, was a particular blow for those looking to promote the J-League.

Despite this, there is still much to admire about the way football is run in this country. In terms of organization and administration it is widely regarded as the best in Asia, with football federations in countries like India, Vietnam, Thailand and Myanmar studying the way it is run.

It has certainly come a long way during its 20-year history. Early on, the Japan Football Association’s plan seemed somewhat shortsighted: bring in the big names and try to force entertainment on people with things like penalty-shootouts for games that ended in draws and there you have it. Or so they thought.

With attendances dwindling, the JFA realized the league was heading in the wrong direction and decided to change the infrastructure, creating a two division system as part of the ‘100 Years Vision’ project, aimed at making 100 professional clubs in the nation by 2092, the 100th season (they are currently well on course, with 40 sides in total compared with 10 in the league’s inaugural season).

Part of their ambitious plan was to encourage clubs to build stronger relations with local communities, which has thus far proved a success.

On the pitch things are also going well. The general consensus is that the standard of football has improved season on season. Toninho Cerezo believes the league has “made giant strides,” during his eight year absence and is “now more competitive than ever.” It is a view shared by Dragan Stojković:

“It is not the Premier League, La Liga or the Bundesliga, but it is decent and is constantly improving,” says the Serbian. “During the 90s it went through its Primary education, I think now it is at about at High School level, but it won’t be long before it reaches University. They learn quickly here.

I am very happy here. Right now I have no ambitions to manage in Europe. I don’t know why sometimes, but I really do love this league.”

He’s not the only one. In addition to the thousands of loyal supporters who follow their team through thick and thin, the league has also gained a cult following from abroad in recent years.

No doubt the unpredictable nature of the league is a major factor. With an elite group of sides dominating many of the championships in Europe, it is refreshing to see a league where anything can happen.