Competition in the e-commerce industry has inevitably intensified in recent years – with shoppers becoming more and more comfortable online – but Peter Glusker, of ‘flash fashion’ site, Gilt Groupe, tells us that “there is further room for growth in the industry, as long as companies like ourselves continue to evolve.”

Companies are constantly searching for innovative ways to give customers a good experience while also – in an ever wallet-watching world – hoping to help them save cash.

Amazon and eBay led the way in the late nineties and 2000s and remain the two most powerful marketplaces in the world, whilst here in Japan, Rakuten – with around 80 million users – is as much of a household name as any iconic department store.

Competing with giants like these may seem like a tough task, but that hasn’t stopped a whole host of smaller sites starting up over the past few years to offer niche services and products. 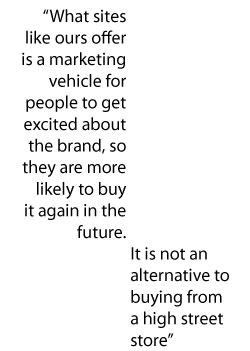 The popularity of fashion ‘flash sale’ sites, in particular, has flourished. Brands that some would have seen as too expensive to buy at stores are now affordable and accessible thanks to the emergence of companies such as Gilt Groupe, Ideeli, RueLaLa, Beyond the Rack and Haute Look.

These sites offer a new online experience, with a limited time to find top-end items at heavily discounted prices. Customers compete with others, each desperate to get their hands on that elegant party dress or must-have bag at a knockdown price.

It was New York fashion startup Gilt Groupe that pioneered the business model in 2007 with a concept Forbes magazine says was driven by “building a community of high value consumers around limited-time, members-only ‘privates sales’ for designer apparel at steeply discounted prices.”

It wasn’t long before the site opened up to the general public, and membership soared into the millions. There are now more than 100 flash sale sites, including Amazon’s new platform, MyHabit. While each has its own unique style, the basic premise on each site is the same.
“We launch our sales at 9pm every day here in Japan and 75-80% of our products are sold in the first 90 minutes,” says Gilt Japan President Peter Glusker. “It is first-come, first-served and there is a time limit on how long you can hold things in your basket so there is no time for hanging around.”

“Customers value it because it is an entertaining way to shop,” he adds, explaining the system of email-announced sales. “It is a different shopping experience to what people are used to as there is an element of surprise to it.”

This style of shopping has proved to be both enticing for customers and extremely profitable. According to IBISworld estimates, the top US flash sale sites generated more than $2 billion in sales last year.

At the same time, things aren’t looking so rosy for bricks and mortar shops, with a number of high profile businesses having closed shops in 2012, particularly those in competition with the new breed of online rental and entertainment companies.

As financial concerns continue to grow, more and more people turn to the web, where they expect bargains.

Retail expert Phil Wrigley argues that the situation has become so bad for high street stores that they have become “almost completely moribund,” and that they are currently in the middle of a “real, genuine and irreversible crisis.”

Glusker, however, disagrees. He believes there will always be a need for high street stores and that his company can actually help rather than hinder their growth.

“They (high street shops) are not going to suddenly die out,” says Glusker. “If people really need something like a suit, they are going to go to the shop and buy it. That isn’t going to change. What sites like ours offer is a marketing vehicle for people to get excited about the brand so they are more likely to buy it again in the future. It is not an alternative to buying from a high street store.”

Glusker describes it as being like “a conversation with brands.” Customers provide contact information so storeowners can follow-up with him/her in an attempt to make them regular shoppers. This is where Gilt has an advantage over a site like Groupon.

The ‘deal-of-the-day’ company, which spurned the $6 billion advances of Google in 2010, has seen its stock price deteriorate rapidly in recent times (it is said to have lost 80% of its value since its initial public offering over a year ago), and one of the main reasons for this is that while it provides great deals for its users, it doesn’t offer much for merchants. As well as taking 50% of the sale, it doesn’t give any information about people that use the site meaning fewer retailers want to do business with them.

While Groupon struggles, flash sale sites such as Gilt Groupe thrive. Profits may not be increasing at the pace they once were and the initial buzz may have worn off, but long-term prospects remain positive. According to Glusker, “there is further room for growth in the industry as long as companies like ourselves continue to evolve.”

Gilt has already expanded in to homeware, travel and men’s and children’s fashion; it even has a gourmet food site called Gilt Taste. And it isn’t only customers who are happy with the service: it was again Forbes that noted Gilt’s success coming at just the right time for retailers, who see their model as offering “a brand-sensitive way to capitalize on the massive inventory supply glut following the onset of the recession.”

The evolution of the model and diversification and brand stretching that all businesses know is necessary is as important as ever. We wonder what will be next.