German electro-styled singer songwriter Masha Qrella will be making her first visit to Japan next week – her tour of Japan making two stops in Tokyo.

Masha has been an integral part of the Berlin music scene over past ten years, recording with bands like Contriva and Mina as well as producing her own solo work. Her next release, Analogies, on seminal Berlin label Morr Music, is her first in seven years.

So what’s she been up to? Well, writing music for theatre productions, movies and TV – her work was recently used on hit US TV show Grey’s Anatomy. As part of the tour she’s also releasing a limited edition tour EP with the single, Crooked Dreams, backed with two remixes by Tokyo artists, aus and miaou.

Masha Qrella plays a special acoustic show at FOUNDLAND in Vacant, Harajuku on the 17th, followed by a full band set in Shibuya O-Nest on the 24th, with support from Cokiyu & miaou.

Full details of the tour are at tetorecords.com

Mayumi Hasegawa spoke to Qrella ahead of the tour:

This is your first time in Japan – What kind of image of Japan do you have?

I imagine Japan as a very modern but at the same time very old fashioned country in the sense of cultural traditions.

It’s been about seven years since your last release. Was it easy writing the new album? Did you have any particular concept in mind?

All in all it was pretty complicated – I needed two attempts to record the album. In 2007 I had the album recorded for the first time but I didn’t like it. It sounded very complicated and dark. So, I skipped the whole project, did other things in between, among them an album with cover versions of Kurt Weill and Frederick Loewe (German composers who wrote songs for the Broadway) some theater projects and music for movies. 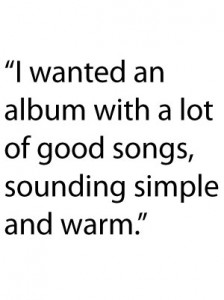 To play other songs in different constellations and situations helped me to find an easier approach towards my own songs.

So in 2011 it felt much easier to record new versions of some of the old songs and to complete the album with songs I’ve written for other situations, like for movies or theater projects. I wanted an album with a lot of good songs, sounding simple and warm.

You were part of Mina and Contriva before. What kind of influence do they have on the music you make as a solo artist?

I’m still part of Mina and Contriva, I’ll always be. I started playing music with those bands and I didn’t play any instrument before. That was the only music school I ever attended and whenever I think about those bands I hope we will find the time to get together again.

Actually one of the songs from the new album is about Mina and the time we had with the band and I’m doing a video for it right now, including pictures and video material from that time.

What do you think about the current state of the music scene in Berlin? Can you recommend any new artists for us?

It’s hard to say, Berlin got so big, everybody comes to Berlin to make music. There are so many people doing so different things that I don’t dare to talk about “the” scene. Also I’m not so much around anymore, since I have two kids and I’m already away from the family a lot when I’m on tour or working in other cities for other projects.

So whenever I’m in Berlin I try to spend some time with family and friends. Or I go to see concerts, shows and exhibitions of friends or bands I already know because I feel the need to stay in touch with those people. So there is really very few time left to explore new things.

Still, of course, I does happen that I hear a new band I like. The last time that happened to me with Normal Love, and they will play with me in December in Berlin.

What are you looking forward to most during your visit here?

The train rides, unfortunately it’s something I do very seldom in Europe, it’s too expensive, mostly we fly or go by car.

Finally, do you have any words for your fans in Japan?

Don’t hesitate to shout in songs you want us to play!