An entrepreneur with a plan: to take R&D away from the major companies and make the world a better place. How does Hiroyoshi Hata plan to do this? And why is he appearing at the Good Design Expo this month? Oh, and the flowers?

They only care about profits and they don’t mind stepping on people on the way. Many people harbor these sorts of negative feelings towards big business and multinational corporations and it is easy to see why in the modern world. Hiroyoshi Hata believes there is another way.

Born in Nagano in 1963, Hata has a background in science, having graduated from Fujita Health University in 1986.

It was while at university that his future was decided, though it was perhaps not the lab technician’s license he gained that would spur him on, it was time spent working for UNESCO as a volunteer.

“Basically,” Hata says, “I was working initially on a vaccination programme, aiming to help kids in developing countries. After a while, though, to me it became clear that while such projects were doing really good work, they wouldn’t bring about a long-term solution.”

Frustration at watching new strains of diseases may have been what kept Hata working in blood testing labs at a university hospital but his aim was to start his own company, one that that could go to the heart of wider problems. GENIU&A-RAY was founded in 1999. Hata as he appeared on the cover of our November 2012 issue.

At the heart of his idea was this: if the process of R&D is taken out of the hands of major technology companies to focus not on ends that exclusively meet profit-based thinking, then it can be shared with people in the world who are less likely to be able to do it for themselves. The problems lie in some ways with tradition.

“For example, Panasonic, Toshiba and other giants are doing R&D on their own and also covering production and distribution. That’s the traditional way,” Hata explains. But if the products that could potentially result from that development stage are not marketable, or relevant to consumers within Japan, the work is essentially dead.

“In fact there are many studies which are not used at all, left alone and wasted.”

“So those big companies monopolize the market and niche requirements are not met – especially if the needs are in the developing world, which I know well. I would like to find these issues and find a matching study and develop it.”

Hata is a busy man, spending much time out of Tokyo in Tottori. Since 2009, when Panasonic acquired Sanyo, who had many factories in the area, there has been a high rate of unemployment and a lot of talent wasted, he says. Seeing a potential for growth, he is basing his operations in the city. He is often abroad, too, and has recently been working closely with university students in Vietnam as the first stage of a new project.

“Universities are focused on research but they are far away from production. My intention is to bridge that gap. The ultimate goal is to help set a proper economy in the foreign countries. A long time ago, when I was helping to organize a youth exchange system, I realized that there should be a holistic approach to the needs of the next generation.”

“I had a lot of time to communicate with Asian youth. Eventually I not only realized who I was and where I came from, but also what were I believe to be the core values of Japan.”

Hata talks about a “‘-dou’ mentality. It’s kind of the ‘art of’ something,” he says, “and it’s at the heart of Japanese culture. I thought that to do something to help spread that, I could, for example, try judo or kendo, but I was too old! For sado (the art of the tea ceremony) I would need many things, a lot of equipment. But kado (flower arranging) was different. Even if you go abroad you can do it, using that country’s own flowers.”

A few years ago Hata decided to study at Ikenobo, the original kado school, in Kyoto, and got a license to teach it (pictured on the left), along the way finding some inspiration for his business practices. “In kado, the soul, skill and body need to be unified. Maybe that can be used in business; you need to develop your skill, your heart and body all the time.”

“And the art of flower arranging is, in the core, the ability to take whatever is in your hand and arrange it. I think in Japan we are good at doing that with business, too.”

When searching for a direction in which to channel his efforts it did not take long to remember parts of Asia he had experienced through work, volunteer projects and travel. Hata had met many people – particularly in places such as Laos, Vietnam, Bangladesh and China – and had learned much about the problems many economies and people faced. 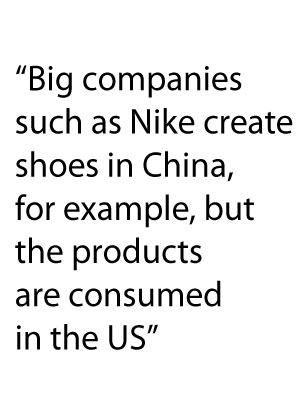 After “about 10 years of study,” Hata set up his biomedical related research & design company with high hopes. He had spotted something that needed changing.

It was not simply consumer needs but wider societal issues that Hata would target. Hata’s company is essentially a ‘fabless manufacturer’. This means that the focus is on the development of a particular piece of technology that can then go on to provide the core to a product.

“Even though basic needs can be the same, the shape and final stage of production is different by country due to all sorts of factors. So I would like to help the countries by giving them the technology, then allow them to work with it to produce the product.”

“Big companies such as Nike create shoes in China, for example, but the products are consumed in the US. I am interested in making LED lighting systems, for instance, in the country they are to be consumed in. Manufacturers and labourers can see the products they are making and will have a sort of pride in themselves. They can feel that they are making something and making progress for their society.”

“The ideal style of business,” for Hata, “is one in which the core is done in Japan and the final production is done in the countries. This not only helps the economy of the country but the product has the shape and manner of each of the countries’ needs. That would be ideal.”

Hata’s latest major development is a board that reduces the production and install time for LED lighting systems for businesses. By removing the need for soldering, which takes up a lot of time and manpower, countries that would have previously been unable to use such ecologically and economically sound systems now have a viable way.

When he mentions that his company has been awarded a Good Design Award for his “Faster Buster” line of sterilization products, his focus on the user – the consumer – is clear. “I am pleased that we were recognized for functionality, not simply design.”

Showing us the light, Hata has found inspiration for his philosophy from many corners of the world. His application is, we hope, part of a new wave, pushing business in a positive direction.