What’s on at the cinema in Tokyo this month?

As the summer finally winds down the action at the box-office is not letting up and there is a real mixed bag of releases this month, including a documentary, a comedy, the return of a franchise, the start of a new one and even a musical. Here’s our rundown of some of the biggest films hitting screens this month.

Scottish director Kevin Macdonald returns to the documentary format in which he made his name with 2003’s Touching the Void, the tale of two climbers who faced peril in Peruvian Andes. Marley (out Sep 1) is a biographical account of the life of music legend and Jamaican cultural hero, Bob Marley, and has the ambitious objective of being the definitive look at the life of one of music’s greatest stars. Looking behind the scenes at both the man and the legend that surrounds him, MacDonald’s film, which begins in West Africa and tells us the story of how his parents ended up having a child in Nine Mile, Jamaica, has been very well-received by most critics.

Made with the support of the Marley family, the film features revelatory interviews with the people closest to the singer, including his wife, children and band members.

MacDonald uses interviews smartly and unseen performance footage helps to create a film that reaches beyond die-hard fans to create an absorbing account of a man who in his short life – Marley died 30 years ago, at just 36 years old – became an icon.

Rock of Ages (Sep 21) is a musical based on a Broadway hit of the same name. The film’s all star cast includes Catherine Zeta-Jones, Alec Baldwin, Paul Giamatti and Russell Brand, but the main talking point is a film stealing performance from Tom Cruise, as arrogant rock star, Stacee Jaxx.

Set in the 80s, when hair-metal was at its peak, the film follows the story of Sherrie, played by country singer Julianne Hough, a small town girl who moves to L.A. in order to realize her dream of becoming a star.

There she meets Drew (Diego Bonita), a bartender who gets her a job at The Bourbon Room club, where the owners are currently trying to stage a performance by notoriously difficult Jaxx. The film has received mixed reviews however fans of the music of the era, and younger fans of Glee’s karaoke covers of rock classics should find something to enjoy in the films over-the-top, camp fun.

Its been five years since 2007’s The Bourne Ultimatum seemingly ended the Bourne franchise with a confident finale to the popular trilogy. Now the series has returned, without Matt Damon’s Jason Bourne character but with Jeremy Renner, seen in last months The Avengers, stepping in as new player, Aaron Cross.

The Bourne Legacy (Sep 28) inhabits the same universe as the previous films and seeing some original characters return, Renner is also joined by fellow new-comers Edward Norton and Rachel Weisz in a film directed by Tony Gilroy, co-writer of the earlier films.

Aaron Cross is a member of a Black Ops team who is targeted for elimination after Jason Bourne exposes the Treadstone Project. After realizing he is under threat, Cross sets out to uncover the truth about himself and the people he works for.

The Hunger Games (out Sep 28, pictured at the top) has been the surprise hit of a blockbusting year across international cinemas, breaking opening day and weekend records on its release in the US. Based on the popular novel by Suzanne Collins, the film will hope to capture the Twilight market and share in that films success.

It stars relative newcomer Jennifer Lawrence as heroine Katniss Everdeen, one of twelve children selected to take part in a televised competition in which the competitors must fight to the death. Set in a post-apocalyptic future and drawing comparisons to Japan’s own controversial classic Battle Royale, this film isn’t quite so violent and is sure to be a hit with the teenage crowd. The Dictator (Sep 7) is the latest offering from comedian Sacha Baron-Cohen, creator of the Borat and Bruno characters. Cohen’s latest incarnation is that of Admiral General Shabazz Aladeen, tyrannical ruler of the fictional North African Republic of Waddiya. The Dictator uses a more traditional comedy format to Baron-Cohen’s previous ‘mockumentary’ style, but his character is no less outlandish than previous incarnations, and perhaps even more controversial.

The Saddam Hussein/Colnel Gaddafi-like Aladeen is a sexist, racist, genocidal monster with dreams of creating his own nuclear weapons, who travels to New York to better express himself to the United Nations.

While in America, he falls prey to an assassination attempt from his uncle Tamir, played by Ben Kingsley, which sees him being replaced by a double and the real Aladeen meeting up with Anna Faris’ feminist, organic food shop owner.

Formulaic it may be, but the laughs are pretty much guaranteed – if you can brush off some of the offensiveness. Some of the subtleties in the satire of previous characters are gone and the jokes are bold and, at times, immature, but with Baron-Cohen you know what you are getting and here he delivers. 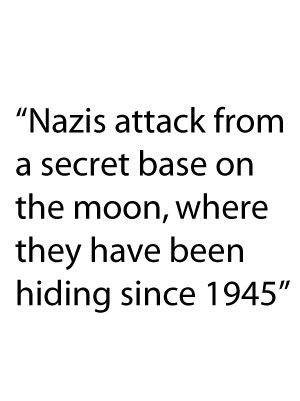 Finally, Iron Sky (Sep 28). This comic sci-fi action movie (a pretty tough genre to get just right) takes us forward to 2018 and the invasion of Earth by Nazis who attack from a secret base on the moon, where they have been hiding since 1945.

Some half decent black comedy is about the only way the Australian/German/Finnish team behind the film could get away with the B-movie style plot and there are some laughs.

Sarah Palin is President of the United States of America and, in her (character’s) words, “every President needs a war.”

So, take it to the guys who have been watching and plotting from a swastika shaped HQ near the Sea of Tranquility they do, but the US team has a battle it may not have expected on its hands.

It is fair to say that most of the people who have seen this film have done so on DVD – it only had a week in Europe’s cinemas before that was released – but it is worth a taken with a pinch of salt look.

Heavy on blue screen action scenes and with some diologue that you might wish were just a tiny bit sharper, take a few mates and perhaps grab a beer or two for this one.