Each year between fifteen hundred and two thousand Scots – and Scotland enthusiasts from all over the world – gather for a traditional Highland Games just outside Tokyo.

With caber tossing, stone putting, hammer throwing, dancing and perhaps whisky (or Irn Bru?) drinking, the day will be quite an event. And this year is something special: being the 30th anniversary of the gathering, its organisers  – who are a registered NPO – are planning a commemorative whisky bottling (and some whisky tastings) and an expansion to the events on offer.

If you aren’t familiar with Highland Games, the first thing you should know is that the day has something for everyone.

Traditionalists will be kept happy by the bagpipes and ancient attire (what’s under those kilts?), fans of Scottish cuisine, or even those curious, should be satisfied by haggis and a dram of single malt. The star of the show, though, should be the sports, perhaps the most iconic of which is the caber toss: a huge log (caber) is tossed (actually it is turned, end over end) away from the mighty arms of the thrower who aims to get it as far away as possible from their body.

Want to try your luck against the experienced? If you think you have what it takes, why not turn up early on the day (before 9 a.m.) to register and get involved?

There will be a brief training session before the games begin at 10:30 for those interested – take a look at the Japan Scottish Highland Games website for more details on the “heavy events” and their rules.

Kids aren’t left out with egg and spoon races, a stamp rally and the ever popular tug-of-war livening things up and there will be many friends to be made. Food and drink stalls will be on site. If you have heard of the event but never been, this year seems the ideal opportunity. 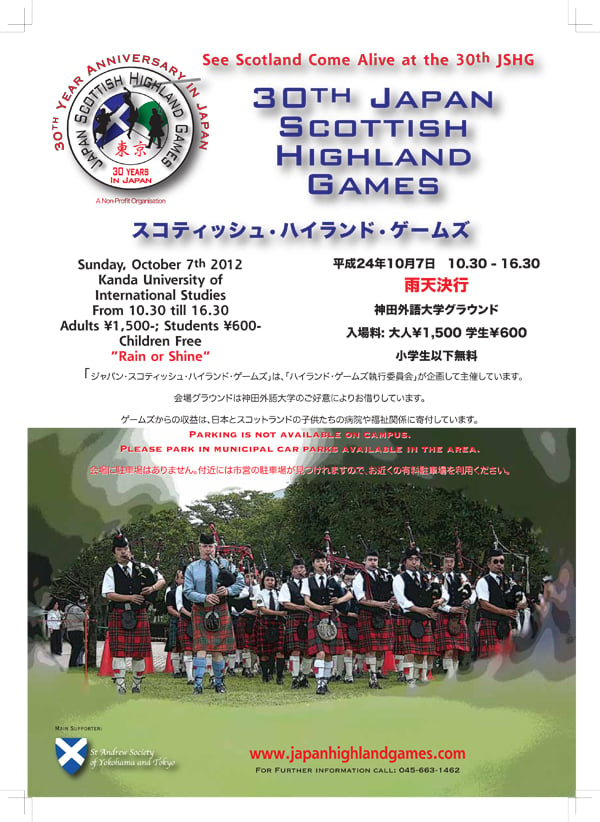