How can a Swedish company compete with Japanese electronics giants on their home turf? An interview with Gordon Thom, about why not being in the electronic megastores was hurting.

A global leader in household appliances, Electrolux is most famous for inventing the first domestic use vacuum cleaner. Celebrating its 100th anniversary this year, the company is well known throughout the world for its innovative and durable products, yet for Japanese consumers it is a largely unfamiliar brand.

That is something that CEO Gordon Thom would like to change. Weekender recently met with the affable Scotsman to discuss his strategies on breaking this difficult market.

“I joined the company around a year and a half ago and quickly realized that we had to change the way we went about things,” says Thom. “Our annual sales are around 40 Million (units) in 150 countries, yet Japan accounted for just 0.4% of that revenue. It is incredibly low in a Nation where consumer spending is so high. It was obvious that should have been doing much better here.”

So why have Electrolux struggled to make an impact in Japan? Of course fierce competition hasn’t helped. Domestic brands such as Toshiba, Panasonic and Hitachi dominate the market, while in terms of vacuum cleaner sales, they are also well behind rivals Dyson, who sell around a quarter of million vacuums in Japan annually. Electrolux sell only a few thousand. Thom, who used to work for Dyson, is relishing the challenge of catching them up and believes strategic changes could eventually help them achieve that.

“There is stiff competition in every industry, so we can’t use that as an excuse. The biggest problem with the company in Japan when I arrived here was that we weren’t in the mass appliance retail stores,” he tells Weekender. “Shops like Yodobashi Camera, Bic Camera and Yamada Denki sell 80% of the domestic appliances in Japan and we weren’t there! It didn’t take a genius to work out what we needed to do, so we changed strategy and got in to those retailers.” 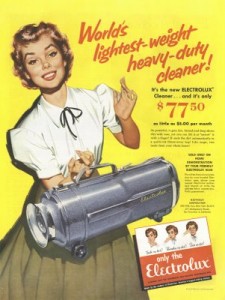 The effects were immediate. Brand recognition started to grow and sales doubled. They finally started to make inroads in to the Japanese market and Gordon Thom can take a lot of the credit for that. He looks back at his first twelve months at Electrolux with a lot of pride, viewing the sales results the company achieved during that period as one of the two biggest achievements in his business career, the other being the launch of the ergothree vacuum. Designed with the Japanese consumer in mind, it went on sale in February and has so far proved very popular.

“We’ve had vacuums that have been quiet before (the Ultra Silencer), and ones that have had a lot of power (the Ultra-one), but no-one up until now has managed to combine those two features in to something so compact. We are not talking very small, it weighs just under 4 ½ kilograms so it is an acceptable size that the Japanese consumer wants.

The unique thing about this vacuum was that apart from the Swedish designers, nobody outside Japan was allowed to have any input in to it. This is the first time we have done something like this. At the moment it is just being sold here, but it will soon go on sale in Korea, Taiwan and Europe.”

Thom is determined to make Electrolux a major business player in Japan, a country he believes has enormous potential. “There are good opportunities for foreign companies here. You must get the right product and then find a way of explaining why it is better than others. I love Japanese consumers. They are very interested in learning about the product and they will take time to understand it, then they will be prepared to buy it.

That doesn’t mean that we should act like a Japanese company. There is no point in foreign affiliated companies trying to do that. It just doesn’t work. One of my biggest challenges when I came here was trying to change that mindset. I think there are real advantages to being foreign. There is no consensus building, this gives us more agility. If someone has a good idea then we go and create it, simple. I can also be more blunt in meetings than my Japanese colleagues. This works well with some buyers, not so well with others.”

Thom is very positive about the direction the company is moving in here in Japan. They really started to get the ball rolling with the ergorapido stick vacuum, which sold well and he is hopeful that the ergothree vacuum will be even more successful. The main aim though, is to make Electrolux a well known brand.

“A year ago less then one percent of the Japanese population had heard of us. It is now up near to 10% but we really need it at around 95%. That is not going to happen overnight and it is not going to happen cheaply. It will require patient effort and investment, but eventually I would like Electrolux to be as natural a choice for the Japanese consumer as Panasonic, Hitachi or Toshiba.”