As I write this, it is a super hot day and feel safe in saying it’s hot and humid when you’re reading this column. As they say, time flies when you’re busy and August has come and gone – hopefully it will start to cool down in a few weeks. Most of my friends are back from their summer holidays, Ramadan is over for our muslim friends and the kids are back in school. Fashion outlets are showing off their cooler and cold weather styles and, with the light and bright new National Azabu supermarket recently reopening and fast becoming the community center for many people I know, I can’t believe it’s already September.

July and August seemed to stay even busier then usual this year. In addition to all the National Day receptions I attended, there were some great cultural food festivals at Yoyogi park, fashion events, all kinds of pop and classic concerts, art exhibits, sports events, charity bazaars, movie premieres and more to keep us entertained. We can never quite slow down and that’s what makes Tokyo so entertaining, exciting and enjoyable.

I’m pretty much into all kinds of music so I feel really glad we have clubs such as Billboard, Blue Note and Cotton Club, and great showbiz agencies such as Udo Kyo, Creativeman and Smash who have all the top as well as up and coming pop and jazz artists coming to Japan for concerts. There are also agencies specializing in classical music and big companies such as Sokka Gakkai’s Min-On concert association bring fantastic cultural shows from all over the world.

Last month or so Min-On brought over almost 50 talented young Chinese performers from the Shaanxi Song and Dance Troupe to perform their musical, Moon Over the Capitol, with music and dance of the Tang dynasty.

The Japanese version of the broadway show, Rock of Ages (Warner Brothers just released the film version of the musical, starring Tom Cruise), had a Pop Idol star who really got his act together well. He looked only about eighteen but later, backstage, I learned he was in his early 40’s. I didn’t ask him who his plastic surgeon was. 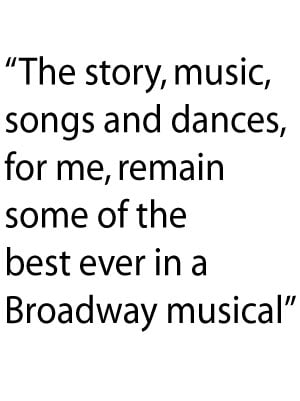 The latest production of the Broadway hit, Blast, is doing a four month tour of Japan and is currently showing in Tokyo. The brass instruments, drums, choreography and talented multi-national cast add up to an awesome show. I also checked out the American production of West Side Story, which was the opening show of the new Orb Theater, in the new Hikarie building in Shibuya. What a beautiful venue. West Side Story is 50 years old this year and they did update parts of it with a few risque words and gestures but the story, music, songs and dances, for me, remain some of the best ever in a Broadway musical.

Our Israeli friends held a super gala concert at Opera City in Shinjuku on the occasion marking 60 years of Japan-Israel relations. Over at the American July 4th blast, the gorgeous Crystal Kay, who I believe is American-Korean and know is a super pop star here, did a dynamic, inspirational job of singing the American national anthem. She, by the way just released a new CD which I’m going to pick up later today in Tower Records. There was also a group called the Young Americans who put on one helluva good show. John V. Roos, the US ambassador and his wife Susan really know how to set up a party.

The same goes for Manuel Lopez, the Philippine ambassador and his wife Maria Teresa, who had a variety of very talented dancers, musicians and singers perform at the 114th anniversary of Philippine independence.

I want to thank Mira Martnee, the Croatian ambassador for the invitation to a concert by highly acclaimed Croatian cellist, Ana Rucner. Special guest for the concert was Neven Mimica, Croatia’s deputy prime minister. Unfortunately I was out of Tokyo that evening but heard, as i knew it would be, that it was a remarkable musical experience.

Looking ahead, the beat will continue to go on. An American production of another of my favorite musicals, Chicago, just opened here in Tokyo and the South African musical, Drumstruck, is back too.

In closing this part of the column I’d like to mention I’m well aware that many entertainment tickets, like in many cities around the world, are not cheap. An inexpensive and truly fun alternative is the almost weekly Saturday and Sunday food/cultural international events in Yoyogi park. The entertainment and the chance to meet interesting people is free, and the food good and reasonably priced. Tokyo really does offer endless things to do.

Normal Tolman is well known for his parties at home and the visit of Marjorie Chu, of the Tolman Collection Singapore, was the reason for one recently. As always, the international level of guests was great. Indian Suneel Bakhashi is back in Tokyo after 18 years, as Citibank’s head of global investment, and American Dylan Halterlein, who was with his Beijing born wife, Duoyi. Others included antique dealer John Adair, Kmazawa University’s Rick Moe and, of course, several of the Tolman Collection’s super staff from New York, Hong Kong and Singapore.

It was a really special evening in every way when the members of the delegation of the European Union joined Hans Dietmar Schweisgut, the EU Ambassador, and his wife Kaoru in hosting a reception on the occasion of Europe Day. The event was held in the spacious and ultra-modern Europa House in Minami Azabu. The boldly designed building, with the flags of the 27 members flying at the entrance, was really impressive.

Once guests congratulated the hosts they moved into the main reception hall or the auditorium. Chefs from most of the members’ embassies had come in earlier to prepare the most popular dishes of the countries they represented and believe me, it was a real gourmet treat. I’ve known Han Dietmar since his days as Austrian ambassador here, he and Kaoru are a popular couple who worked hard with other EU members to make it the laid back and enjoyable evening it was. Kudos to all concerned.

It was a very special evening as well when the Arab ambassadors who are posted here got together with their many friends for a colourful and exciting Arab Day reception at the Mandarin Oriental. Things started out with speeches by Yoshihiko Noda and Waleed Siam, the Palestine ambassador who is also dean of the Arab Diplomatic Corps. Christian Hanning, the GM of the Oriental did the smart thing by allowing the participating countries to work with the hotel’s food and beverage staff to set up the Bountiful buffet.

This meant that in addition to the hotel’s excellent food, guests had the opportunity to try many other delicious foods from the participating Arab countries. Guests also really enjoyed the kids marching band which was bused in from Tohoku. Those kids were good and really seemed to be happy in what they were doing.

The only downer of the night was hearing that Christian Hassing, the hotel GM and his wife, April, will be leaving soon after eight years here. His new posting will be in Singapore, where he’s worked before. This time he’ll be involved in the prestigious hotel chain’s properties in Malaysia and Indonesia as well. Christian and April were popular here and will be missed by all who had the good fortune to get to know them. Take care my friends and all the best.

The Imperial Hotel’s Fuji room really had a festive air for the Philippines Independence Day celebration. The hosting couple, ambassador Manuel Lopez and his wife Maria Teresa, as well as most of the staff and many of the guests, wore super cool Filipino fashions.

The ambiance, as with most things Filipino, was relaxed and thoroughly enjoyable; it was one of those evenings where the guests really mixed, chatted and got to know each other better.

The buffet, a mix of western, Japanese, Chinese and, of course, Philippine specialities was excellent. Like at almost any Philippine happening there was an interesting mix of good entertainment, including traditional songs and several numbers by one of the Philippines’ top violinists. The Philippines has long been one of my favorite getaways and I sincerely feel it is really under rated as a tourist destination. It’s a beautiful country that has so much to offer.