There’s a new Japanese musical talent emerging in the west, and his name is Kaoru Ishibashi. K. (as he likes to be called), is a Japanese-American, who is currently making huge ground swells while on tour supporting US band, Of Montreal, but he is ‘returning’ to Japan to play a show on August 15th at Morph in Roppongi.

K’s music is fresh and has an original sound that is aurally pleasing, and easy to attach oneself to. His music blends lush layers, powerful harmonies, an innocence derived from his falsetto, and ambient tones that fit nicely with classical, pop, folk, and tinges of other-worldly inspirations. K’s live performances have been described as so powerful that tears have overwhelmed some members of the audience. If the rumors are true, then that a pretty good sign that K’s efforts are bearing fruit, because that is what good music is supposed to do.

Fine music is supposed to stroke the listener’s sentiment. So, if you find yourself listening to a Kishi Bashi tune, and it just so happens that a tear manages to fall down your face, then don’t take it too hard, because if you agree with Teenage Fan Club, then tears are cool.

In reality though, tears are merely a salty fluid that dilutes or washes away things that are problematic. They can also help to promote healing for what it is that is ailing you, and thematically K uses liquid as a medium to project that message. Those who feel alienated by their surrounding would probably appreciate the video to K’s single, I Am The Antichrist To You.

The video is a stop animation that was directed by Ishibashi himself. As I watched it for the first time, I was lulled into the illusion that the cute puppy, with a bunny’s tale, had merely bitten off more than he could chew of his oversized floppy ears, and really nothing more. However, that initial impression changed, and changed dramatically as the hidden objects and metaphors reveal a strange and uninviting environment. Soon it becomes apparent that the puppy is unwanted, unloved, and an outcast who is stranded on an unfamiliar island, and that it somehow manages to befriend a bunny. Despite their horrific surroundings, the characters endure it, embrace it, and explore it stoically, almost successfully. Almost!

As cute as these characters are, the unforgiving and harsh atmosphere that surrounds them doesn’t give the viewer time to focus on those attributes. Eventually, the puppy and bunny are bombarded by hoards of flaming numbers, and other unfortunate outcasts that fall from the gray, and unforgiving firmaments. Overwhelmed by all the chaos, pain and suffering that surrounds the frail and impressionable little puppy, he’s had enough, and begins to weep woefully before, finally, drowning in a pool of his own tears. But don’t worry, this is not a spoiler, and it is not all that the story has to convey. You will have to see the video yourself to understand what it is that Ishibashi is trying to convey. Ishibashi says, “There is death, but the cycle repeats itself. The world comes back like a Phoenix rising.”

I Am The Antichrist To You is also dedicated to Ishibashi’s deceased friend who had a chance to view the video before his untimely death. Anthony Scott, who had worked for Pixar on The Nightmare Before Christmas, and who had been the lead animator for Coraline, animated this video. Now we come to Ishibashi’s debut album, 151a, which has been released on the experimental Joyful Noise label under the artist name of Kishi Bashi. 151a has a fresh, often upbeat and high-energy quality to it. The album has layers and layers of variables that aren’t often found in the myriad of trite and formulaic offerings that the listener is often forced to endure. Ishibashi says the album title was derived from the Japanese expression, ichi-go ichi-e, which is translated to mean, one time, one place. Ishibashi says, “The saying reminds me to embrace my mistakes (during a live performance) and move forward.”

If one was to categorize Ishibashi music, you might say it was alternative, you might see it on the World Music shelves. But, you’d be mistaken to think its origins stop there. Ishibashi is an artist whose performances include looping, psychedelia, ambience, clean doo-wop, beats, moog and other stylizations that have become commonplace in contemporary music. But one thing that makes Kishi Bashi stand out from the contenders, and the pretenders, is that Ishibashi is a classically trained violinist, and it is in the four strings of that instrument where Ishibashi’s strength, creativity, and originality lies.

151a has some really outstanding tracks. In my opinion the standout tunes include, Bright Whites, I Am The Antichrist To You, It All Began With A Burst, Atticus In The Desert, and Beat The Bright Out Of Me. However, there are no weak, or filler tracks on this album. 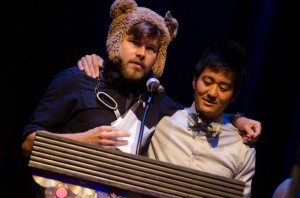 151a is a recording that should stand that test of time, as trends come and go, and fall by the wayside, like coins that are lost through the holes in the pockets of old clothes. If you happen to have a chance to catch one of Kishi Bashi live performances, I highly suggest taking that opportunity. Mark it on your calendar, and don’t forget!

The following is an interview between Stack Jones and Kaoru Ishibashi.

Stack Jones: Where were you born?

Kaoru Ishibashi: I was born in Seattle, Washington.

SJ: Have you lived anywhere else besides Washington?

KI: New York, and Virginia. Virginia is where I grew up. I also spent some time in Boston for school.

KI: I had dual citizenship since the beginning, but when I was 18, I gave up my Japanese citizenship in favor of the American one, which made more sense.

SJ: Since you were born and raised in the states, I’m curious if you speak Japanese?

KI: I do. I always kept it up through immersion in manga and anime growing up, and then periodic visits to Japan throughout my life. My wife is a Tokyo girl, and she keeps me bilingual.

SJ: To what extent do you speak Japanese?

KI: I’m fluent enough to have negotiated my record contract! It was quite a hassle though.

SJ: Tell me what it was like growing up in America as a Japanese?

KI: It was quite uneventful. I grew up on the East Coast, so as much I was a novelty, I never faced any kind of racism, or maybe I just tended to ignore it. One thing that I always was jealous of regarding the West Coast is that there are large Japanese communities over there. We don’t have any on the East Coast.

SJ: Do you feel like you’re Japanese, or are you more comfortable with being dubbed an American?

KI: I consider myself pretty considerate of others, which I think is a very beautiful Japanese trait. I do however believe that I am American at the core, in my views of personal freedoms, individuality, and being flamboyant.

SJ: Have you traveled to Japan?

KI: Many times throughout my life. Relatives live in Tokyo, Mie-ken (Iga-Ueno), and Okinawa.

SJ: What does your family think about you dedicating yourself to being a performing artist, and not seeking security in the corporate environment that the Japanese seem to flock to over here? Are they supportive?

KI: They are, and have always been very supportive of me all my life. They are non-traditional in every sense because they decided to emigrate to the US They’re very happy now that my album’s doing well. I also realize that a lot of Japanese who come over here tend to want to return to Japan.

SJ: What kind of formal musical education do you have? 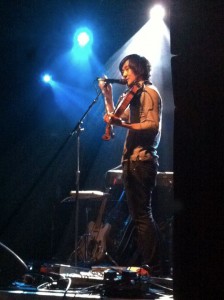 Violin is integral to live shows

KI: I started playing a Suzuki violin in school when I was about 7 and studied classical violin all my life. I also have a degree in film scoring and composition.

SJ: What music influences you?

KI: I listen to everything, but for the latest album, 151a, I tried to model my sound after what I consider lighter albums, like Pink Floyd and E.L.O. There’s a hefty dose of synthesizers and strings in those artists.

SJ: What are your future recording plans?

KI: I’m hoping to start on working on another album very soon. I’m well aware that album cycles are getting smaller.

SJ: Do you have any plans to perform in Japan at any time in the near future?

SJ: Looking back, why did you become a musician?

SJ: How did you get on tour with of Montreal?

KI: I met them at a festival in England. I was touring with Regina Spektor at the time. I was a huge fan, and I started arranging string parts for them.

SJ: What kind of reception are you receiving on the tour? It is often tough for opening acts, isn’t it? KI: When I open I sell so many CDs. I get an incredibly huge response.

SJ: What advice do you have for Japanese musicians?

KI: I would say that for Japanese musicians, creating and keeping at what it is you do best and love is what will eventually be recognized and rewarded. In the studio, I’ve found that the less I worry about commercial success, the more interesting the music becomes, and the more people get excited about it.

SJ: How did you meet Brett Vaughn and what was the brainstorming process for the concept of the video Bright Whites?

KI: Danielle Robarge, who first contacted me, put me in touch with Brett. We really hit it off by coming up with some solid ideas.

SJ: What was the budget for the video?

KI: I think I capped it at one thousand dollars.

SJ: Wow, how did you learn about winning the Judges Choice Award for Best Music Video at the Film Athens, Sprockets Award?

KI: I was there at the awards ceremony with your nephew! (Smiles)

SJ: Has that helped you gain more recognition?

KI: In Athens? Yes. Now all musicians (in Athens) know who I am, but it is a small scene. Now, I’m not just the “Asian guy in of Montreal” anymore.

SJ: Let’s talk about Japan’s triple disaster in 2011. How were you effected?

KI: I haven’t lost anyone, but a friend of mine lost people to the tsunami.

KI: I grew up in the 80s so I always thought it was fairly safe when used for non-destructive purposes. Even Chernobyl didn’t change my opinion on that for some reason. Now, I think oversight should always be factored into the cost, and we should definitely reconsider whether or not it’s worth it. I was also extremely disappointed with the Japanese government’s slow reaction to the nuclear crises.

SJ: Many Japanese artists can’t seem to break into the mainstream western music scene. Why do you think that is?

KI: You mean the American mainstream? I’m sure it’s not any kind of racism (because African Americans dominate pop music here, obviously). There are so many more people in America, so the competition and level of pop music is a lot higher. I think Japanese musicians should just keep doing what they’re doing and not worry about being represented (or misrepresented) over here. There’re plenty of Japanese golfers and baseball stars over here.

KI: No. I would like to be a known name in the more select indie rock scene, like of Montreal for example. I just want to make albums and play shows.

For more information about Kishi Bashi, see the official site.