Anyone who has spent time in Japan will know that the manga and anime series “One Piece” is popular among children and adults alike. Even if you don’t, chances are these images will be familiar.

Maybe you’ve seen the t-shirts, posters or TV spots? One Piece has become more than just a set of characters and stories; it is a merchandising giant, with companies such as Uniqlo producing lines of clothing sporting One Piece characters and even 7-eleven convenience stores using it for advertising tie-ins.

With 65 volumes of manga, over 540 anime episodes aired on Fuji Television, ten movies produced by Toei Animation and new chapters being serialized in Japan’s Weekly Shonen Jump magazine, there is no doubting that One Piece is an ever-growing multi-media franchise with, seemingly, no end in sight. 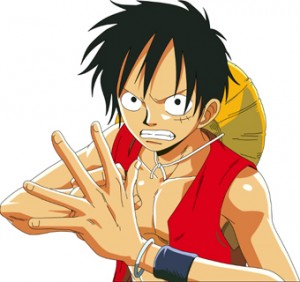 The story revolves around 17-year-old Monkey D. Luffy (left) and his crew, the Straw Hat Pirates. Luffy is determined, with the help of the ever faithful crew of his ship, Thousand Sunny (his previous vessel, The Going Merry, was destroyed…), to hunt down the elusive “One Piece” treasure and become the world’s next Pirate King. Got it?

Of course, along the way, the group encounters quirky – often ridiculous – villains and tries to outsmart the “Marines,” who police the waters, as they travel the oceans in search of the ultimate treasure.

What isn’t so well known, however, is the popularity of One Piece in places outside of Japan. Over the past decade, the United States has seen a growing interest in manga and anime among its youth.

Across the country, annual conventions are taking place, at which fans congregate to celebrate Japan and it’s media.

Book stores have dedicated manga sections that cater to fans and television companies such as Cartoon Network have been running anime as part of its regular programming since as early as 1997. One Piece, particularly, has developed a following and is seen as a symbol for manga and anime in the United States.

As fans overseas immerse themselves in information about Japan, using the internet, they are eager to stay on-trend within the international manga and anime scene. And in demonstrating the Japanese enthusiasm for manga and anime, there is simply no other franchise quite like One Piece.

North American publisher Viz Media, founded by Seiji Horibuchi in 1986, has been credited by some as being the pioneer behind the international popularity of manga and anime. Viz Media is responsible for the translating and publishing of Japanese media for international audiences. Noticing the growing popularity of Japanese media outside of Japan, Viz Media has been translating and publishing the One Piece manga for non-Japanese audiences. Viz Media currently holds the license to nearly 300 manga series, many of which have been published in the US as well as in Australia and parts of Europe, and One Piece and other Weekly Shonen Jump titles are among them.

This approach to making Japanese media accessible to international audiences has strengthened the global appreciation and interest in Japan and it’s culture. It has opened a door to Japan for many people across the planet.

And of course, internationalization of titles that are prevalent in modern Japanese society, such as One Piece, makes it easier for those who are not fluent in Japanese to stay up to date with Japanese popular culture, which is important to some of those currently living in Japan and those who wish to visit or live here some day.

Translated volumes of One Piece, as well as other popular manga, are not limited to being sold in places outside of Japan.

In fact, many bookstores in Japan that sell books for non-Japanese speaking audiences – or even those wanting to learn or brush up English skills – carry copies too.

With the efforts of publishers like Viz Media and the passionate work of manga artists like One Piece’s Eiichiro Oda, it is only a matter of time before manga becomes a full fledged global phenomenon and everyone in the world can enjoy the beautifully imagined stories that are coming out of Japan.

The Toei Animation Official One Piece Anime site (in Japanese), is here.