Less is More in Japan

Strolling with friends in Roppongi, Tokyo, Wang Baosheng, a Ph.D. candidate in design culture at Chiba University, came across an interesting scene.

An area of lawn was encircled by a loop chain which was placed directly on the ground, forming a boundary. We could not help but laugh upon seeing this chain, for it had more symbolic meaning than actual function. Its warning, that we were not to transcend the boundary, despite its diminutive nature bringing humour, was more powerful and effective than any other persuasive words or high fences.

The philosophy of emptiness, or “less is more”, is embodied in many aspects of Japanese life. Just take a simple look at its national flag – a mere red circle in the middle of a white square, but one with a variety of possible or perceived meanings. Japan is also the birthplace of Muji, a famous brand and an influential interpreter and firm executor of the philosophy of ‘less is more’, whose name means ‘plainness and simplicity’. Here, I will discuss some of the many aspects of the Japanese philosophy of emptiness embodied in the Japanese conception of space. 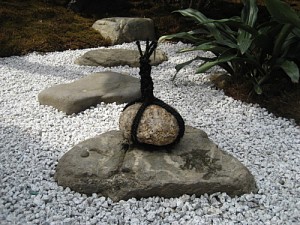 If you have ever been to a Japanese teahouse garden, you might have seen a stone called a sekimori ishi or a tome ishi, wrapped crosswise in bracken or palm-hemp ropes on a stepping-stone path. This stone is not for decorative purposes, nor is it left idle on the road by a careless worker. Instead, it conveys the subtle message that a tea ceremony is underway and that no one is allowed to enter. It is certainly much more appealing and persuasive than a straightforward ‘keep off the grass’ sign. In this case, private and public spaces are simply divided by a small stone, nothing more. Less is more.

Take a look at a Japanese teahouse for sadou, or tea ceremony. The teahouse is usually a Japanese style room with tatami mats, sliding doors and windows, absolutely devoid of furniture, like an empty container. Yet within this enclosed, hollow tranquil space, the imagination of both the host and guest can be enormously fired up. Beautiful life scenarios may come into the mind in this peaceful atmosphere.

I always notice the stone marker, called kekkai seki, beside the gate of a Japanese shrine or temple. In Japanese culture, this stone marker separates two different worlds – the normal world and the world of Buddhist practice. Some might wonder how such a small plain stone, instead of, say, a magnificent boundary wall, can serve as a barrier between this secular world and the other, sacred one. They would not have been so surprised if they had known the mightiness of the philosophy of emptiness embodied in Japanese spatial conception.

A space called tokonoma drew my particular attention. Tokonoma, also referred to as Toko, or alcove, is the built-in recessed space in a traditional Japanese style room, in which a few articles for artistic appreciation are exhibited, such as calligraphic and/or pictorial scrolls, ikebana, an arrangement of flowers, ceramics or Bonsai. The decorations are carefully chosen and the number of these ornaments is strictly limited. 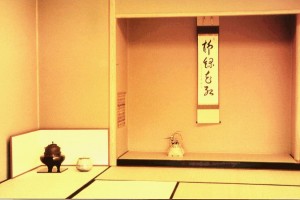 Originating in the late 14th century, the tokonoma, called oshi ita then, was usually located at the corner of a drawing room, which was employed by its host to accommodate his superior. There was usually a wall space in oshi ita where scroll painting or calligraphy would be hung. A slightly raised stage in front of this would be set up for an incense burner, flower vase or candle holder in order to show respect to the distinguished guest.

Since its origin, the tokonoma has been a mysterious holy place and, stepping within this venerable space is strictly prohibited – except for such special occasion as when altering the display, when even then, certain rigid rules must be observed.

According to Japanese custom, the most important guest should be seated with his/her back facing the tokonoma and the host should sit on the opposite side in order to avoid being considered “showing off” the items to the guest. My accompanying Japanese friend told me that tokonoma is the part and parcel of a traditional Japanese style room. It is no exaggeration to say that tokonoma is the essence of the soul of a Japanese style building.

The philosophy of emptiness is particularly reflected in this highly respected space. Just imagine that outside lights penetrate through the paper of the sliding doors onto this tranquil holy space with only a few carefully chosen decorations, creating an atmosphere of mystery and sublimation with a gradual transition of luminance. Enchanting beauty can be sensed from this narrow empty space.

Through the aforementioned cases, it seems that an inconspicuous, empty space, from the Japanese perspective, is more meaningful, formidable and instructive than a showy, affectedly decorated space. It is the plainness and simplicity rather than the magnificence and complexity that count in spiritual communication. In other words, less is more.