Thousands of dance music fans gathered last Saturday to kick off summer by dancing to the beats of the 2012 edition of Big Beach Festival, steps from Makuhari Messe in Chiba prefecture.

As the name implies, the festival took place right on the sandy beach overlooking Tokyo Bay. Despite June marking the start of rainy season, the sun was shining and the drinks were flowing.

Two main stages were perched on the beach, as well as a large tent dubbed the “Disco Balloon”, which hosted a string of DJs throughout the all-day dance party. 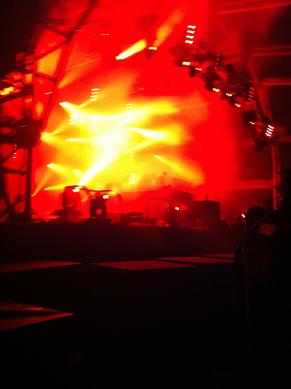 Big Beach was originally launched by British electro and big beat guru Norman Cook (aka Fatboy Slim) back in his hometown of Brighton back in 2001, and for the fourth year in a row the legendary party has been brought over to the shores of Japan.

Star of Big Beach Festival 2011, Fatboy Slim was not able to perform this year, but instead sent fellow Brits electronic duo The Chemical Brothers to headline. Having been a fan of the Manchester group since my high school days, I knew they would not fail to disappoint.

I had the chance to catch one of their performances a few years ago in Korea, as part of Pentaport Festival, and they had played most of their mainstream hits – after all, The Chemical Brothers were one of the first electronic bands to step into the mainstream scene, and along with The Prodigy and Fatboy Slim, they introduced a generation to the techno genre.

This time around, they did not perform their hit songs or use much of their standard psychedelic images and laser show, but instead played a high-energy DJ set, which I thought was absolutely perfect for light hearted festivities by the sea.

We all had a blast dancing to the set, and once again The Chemical Brothers brought everyone together with their enthralling sounds. Even though it was quite different from their usual performances, they did not disappoint and for me their sound will always be reminiscent of teenage years.

The Chemical’s performed after sunset, and the blend of neon stage lights, moonlight, beach sand and electrifying beats made it a highlight; it was absolutely memorable, with a hint of nostalgia for good measure.

Their set was fairly lengthy (over two hours!) but time seemed to disappear and we all got lost in a hazy sea of dancing before making the dreaded train trek back home to Tokyo, but even sand-filled shoes and sunburn didn’t dampen the spirits too much.

These kinds of events are always a great way to mingle and meet people; granted, the beach setting and some strong cocktails would always increase social skills, but I would highly recommend heading out to any summer festivals in Tokyo, especially if you’re a newcomer, to make new friends and rub elbows with fellow music fans in the area. 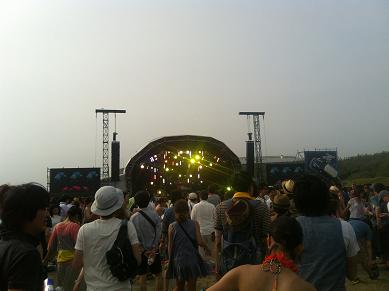 Highlights of the festival not only included the presence of the sun, generous amounts of refreshments, and the high quality of performers, but also the flawless organization of the event.

Despite a massive crowd of thousands, the queues were always moving quickly for food and drinks, making it a smooth, upbeat summer afternoon filled with amazing music and general silliness with good friends, old and new.

If Big Beach set the tone for summer 2012 in Tokyo, it promises to be an euphoric season.