Listing the top 50 restaurants in the world can cause controversy as well as create culinary conversation and celebration. The 2012 list for the San Pellegrino World’s 50 Best Restaurants has climbers and fallers towards the top but is headed, as it has been for the last two years, by Denmark’s Noma.

Whatever you think about the list, with its heavy focus on restaurants in Europe and the US – Brazil’s D.O.M does make it to number 4, but the first Asian entrant is Iggy’s in Singapore – there is good news for a couple of fine Tokyo establishments. Fine dining in Tokyo – in Roppongi and Minami Aoyama, at least, and as far as this list is concerned – has two star players.

Michelin three-star Nihon Ryori RyuGin, Roppongi, has been on the list for over 20 years, and placed as high as three in 2010. This year, the restaurant is at number 28; dropping down the list could be seen as bad news for fine dining in Tokyo, but these guys more than deserve their places and are going from strength-to-strength.

If you are lucky enough to get a reservation at RyuGin – the rush starts on the first of the month when the restaurant begins taking bookings for that month – then you will find seasonal specialities that are in tune with the Japanese traditional palate, but which, as the motto of chef Seiji Yamamoto goes “Pursue the Possibility of Japanese Cuisine.” 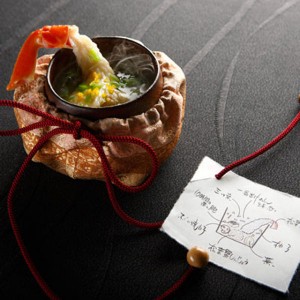 A recent menu included the intriguing “RyuGin Original Dessert Specialite -196℃ – +99℃”, but also refined versions of the classically Japanese ingredient-celebrating dashi based soup, grilled fish and soba noodle dishes that would be at home at many restaurants across the city. The picture on the right shows RyuGin’s Matsuba Crab Hotpot.

Narisawa – formerly Les Creation De Narisawa – has been on the list for four years. This year it takes 27, just beating RyuGin and narrowly missing out on the Best in Asia prize.

The Minami Aoyama restaurant is home to chef Yoshihiro Narisawa, who trained in France under legends Joël Robuchon and Paul Bocuse. Creations like the pigeon dish pictured at the top have made him a star.

A “blend of French technique and Japanese aesthetic,” according to the judges, the ‘food philosophy’, so beloved of restaurant chatter these days, is to celebrate the “gift of the Seasons.”

Dinner at either restaurant will cost visitors around the ¥20,000 mark – not including drinks – so it is not cheap, but for world class food in settings like these, foodies might consider it a bargain. Narisawa offers lunch for ¥7,350, too, so it it not completely of the league of regular diners.

Check out the Narisawa and RyuGin websites – both have English information – to see if you can get a table. You might bump into one of the judges who have announced that next year there will be a fully comprehensive Asia’s 50 Best, to be hosted in Singapore in February 2013.