It was a phrase that quickly spread after the earthquake and tsunami last year and was popularized further when Lady Gaga and her fans spread the Pray for Japan word via Twitter and other social networks. 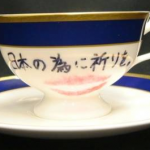 Designing the Pray for Japan wristband, which was sold for US$5, was a successful move and it even became a must-have fashion item in some circles. Now, she has found an impressive new way to raise money for the ongoing charity work needed in Tohoku.

The US Embassy reported to Kyodo news in Tokyo that a teacup (pictured, right) used at her press conference in Tokyo in June 2011 – Gaga is pictured above with ambassador John Roos – will be sold to the highest bidder through the Yahoo! Auctions site.

Check the listing here – but be quick, you have until 11 p.m. on May 6. We are not sure whether Gaga herself wrote the message, perhaps we could forgive her for asking a local to do it for her, but, for good measure, she has autographed the other side.

At the time of writing, with five days remaining, the bid stands at ¥501,000. Surely, though, this is a good enough cause – and a strange enough idea – for someone, perhaps an eccentric Gaga fan, or ‘Little Monster‘ to push it up nearer the million mark?