A US Embassy event hoping to promote and enable Baseball participation in Tohoku, Vietnamese diplomatic goodbyes, Indian Republic Day celebrations and a Thai royal Birthday. It could only be Bill Hersey, with April’s edition of Tokyo’s longest running – and international-as-ever – society page. 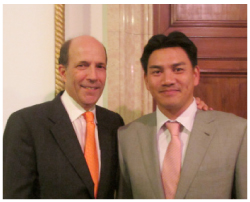 The Roos’s Operation Tomodachi baseball event at the U.S. Embassy

U.S. Ambassador John V. Roos (pictured on the right with Chicago White Sox player Tadahito Iguchi) and his wife are a very active couple who are involved in endless worthwhile community activities. One is Operation Tomodachi, a public-private partnership forged after 3/11, led by the U.S. government, the Japanese government and the U.S.-Japan council. Organizers say that Tomodachi invests in Japan’s next generation and thereby deepens relations between the U.S. and Japan. The program was showcased at the event at the embassy titled Helping to Bring Baseball Back to Tohoku, this included re-laying fields in Tohoku and building a stadium in Ishinomaki. Tomodachi is also helping re-equip Tohoku’s youth baseball teams (you can see members of one in the picture at the top of this page) with equipment lost in the Tsunami, and sending Tohoku students to Hawaii to attend baseball clinics.

It was a very high spirited reception with special guests that included Major League hall-of-fame’s Cal Ripken Jr., Jane and Paul Yonamine, the wife and son of the late and great player Wally Yonamine, as well as coaches and High school baseball players from Tohoku. It was also nice to see former U.S. ambassador Thomas Schieffer, who, like John Roos, is very involved in baseball. I really wish I had more space to go into all this in detail, but I don’t, so will just close with kudos to all concerned and involved. The Indian ambassador and Mrs. Alok Prasad have been posted here a relatively short time and have been super busy since their arrival. One of the highlights of their (what has to be) hectic schedule was the people-packed reception they hosted on the occasion of incredible India’s Republic day, in the Okura Hotel’s well designed  Ascot Room. It was a colorful gathering with most of the Indian ladies in chic bright coloured saris. Their beautifully crafted jewellery was very special and the colourful buffet featured Indian, Western and Japanese favourites. Pictured to the left are Indian minister Sanjay Panda and his wife Minati.

The ice carving of an Indian fort in the centre of the venue was very impressive. The program featured a welcome speech by the ambassador and a fast paced performance of traditional Indian dance, it was a laid back event, perfect for the occasion. To celebrate 60 years of India-Japan diplomatic relations there was also a photo exhibition and panel discussion at the Indian Cultural Centre. I went along to enjoy the music and dance extravaganza Ticket to Bollywood at the centre. It was truly incredible.

After over 40 years of writing this column you’d think it would be easy seeing friends come and go. I’m well aware that the average stay for diplomats posted to Japan is three to four years but even so it’s not easy. This was especially true when Vietnamese Ambassador Phu Binh Nguyen and his wife Le Thien Ngan—who were my neighbors and truly good friends—returned to their country recently.

The Nguyens are some of the nicest, kindest people I know and like everyone who had the privilege of knowing them, I will really miss them. They were both involved in so many worthwhile community activities and did so much to promote friendship, business, understanding and good relations between their country and Japan.

Normally their Moto-Yoyogi home was packed whenever they had any kind of reception or party there. For their sayonara they included me in a much smaller crowd than usual and it was so nice to be able to share the evening with them and a select group of their best friends. The program included a very meaningful speech by the ambassador and a wonderful musical program by a group from Hanoi. After the show there was bountiful buffet of Vietnamese food (love those noodles) and we had the chance to relax and meet some people for the first time. These included Indonesian ambassador Muhammad Lutfi and his wife Bianca and East Timor ambassador Domingos Sarmento Alves. I also had the opportunity to see some of Le Thien’s paintings which included landscapes and portraits. Believe me, the lady is a real artist.

Thanks to the ambassador and Vietnam Airlines I spent five fantastic days in the northern part of Vietnam a couple of years ago. I loved Hanoi, the day at Ha Long Bay was awesome and the overnight train to Sapa, to check out the hill tribes, was a really memorable travel experience. Now that the Nguyens are there, I have more reason than ever to go back again. It’s a beautiful country with wonderful hotels and friendly, hospitable people. Do hope you can visit there while you’re in this part of the world. Thailand’s King H.M. Bhumibol Adulyadej has long been one of the most loved and highly respected leaders in the world and the reception to celebrate his birthday, held at the Imperial Hotel here in Tokyo, was perfect for the important event. The huge hotel venue was wall-to-wall with people and guests included many Japanese government officials, most of the international diplomats posted here, business leaders, familiar faces from the arts, fashion and entertainment worlds and the cream of both Japanese and foreign society. The turnout was proof of the popularity of the king and his top representatives here, Thai ambassador Virasakdi Futrakul and his dynamic wife Aumaporn (pictured, left).

I think everyone I know LOVES Thai food and the hosting couple had arranged for about a dozen of the best Thai restaurants in Tokyo to set up food stalls in the reception venue and serve their speciality dishes. It was artistically arranged, colorful and delicious. One of Tokyo’s most active party-crashers even turned up with a good sized plastic bag which she filled with Thai fruit cakes and cookies to take home. (It takes all kinds!) The program that night included short speeches by the ambassador and several Japanese dignitaries, traditional music by a group from Bangkok and an exciting dance performance. I had the honor and privilege of meeting the king at a reception many years ago. I still listen to a CD titled ‘The Music of H.M. The King of Thailand H.M. Blues’ that was given to guests at the reception. Talk about great memories!

Two of my good friends and long time supporters of the Weekender recently retired and we want to wish them all the best. First of all Mitsuru Sakuraba former CEO and president of Massimo Zanetti Beverage Group in Asia, he had a very exciting and fruitful seven and a half years here making Segafredo a real world leader in coffee.

The second person I must mention is Chika Koda, director and president of Hyatt Japan. I’ve had the good fortune of knowing for over him 30 years and like Mitsuru he’s helped me so much in my work, in meeting so many good people and my travels, we also want to wish Mitsuru’s successor, Toshiro Mori and Chika’s successor Hire Abe all the best in their future ventures.