Spring, the season synonymous with change, is upon us. This year, students at Aoba-Japan International School can look forward to some monumental changes. A-JIS will open the gates of its new school campus facilities in Hikarigaoka, Nerima ward. This move means A-JIS, founded back in 1976, will be brought right up to date.

“We are all very excited as we have been working on this for a while now,” remarked Adam Doi, Board Chair and son of founder Regina Doi. “We had acquired a school building last year, which used to be a public school belonging to Nerima Ward; we were, however, unable to commence work renovating the building until planning permission came through. We are now doing all that is necessary to have everything completed by August this year.” 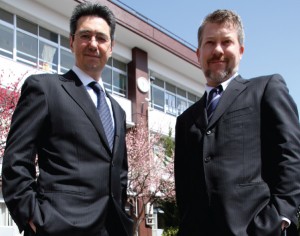 Hikarigaoka is an area situated on the edge of Tokyo. Previously a U.S. military base and airfield, one third of the area was converted into a park after the base was vacated in 1973. Hikarigaoka town was erected eight years later next to the park. Now with schools, residential and office buildings well established, the town is modern and thriving. As well as an extensively green area, neighboring Hikarigaoka Park boasts a variety of facilities including a large public pool, a water-play area for children and even a bird sanctuary.

“The new campus is located next to the park in an idyllic setting,” said Mr. Doi. “It is only a 10-15 minutes walk from Hikarigaoka Station to the school. The wide path leading to the school is not only lined on both sides with beautiful ginko trees but also traffic free, making it safe for the students. The new campus is twice to three times the size of the present Suginami campus. With the improved facilities, a large gym, playground and ample classrooms, A-JIS will be able to meet all the facilities requirements to fully implement the International Baccalaureate-Primary Years Program (IB-PYP). The move to the Hikarigaoka campus is going to be a pivotal moment in time for A-JIS.”

Aoba-Japan International School (A-JIS), originally named Aoba International School (AIS), was founded in 1976 by Regina Doi, a veteran certified teacher who had spent many years teaching in international schools in Japan. The school was initially a kindergarten and unlike most schools of its kind at the time, its specialised programs emphasised English and Japanese language skills, the arts and fundamental mathematical skills, thus building a strong foundation which helped prepare its students (of various cultural and ethnic backgrounds) for a secondary education at international schools in Japan or in other parts of the world. AIS’s program proved successful and was recognised by the Japan Council of International Schools.

“The classes conducted at A-JIS are in English generally and require the students to be conversant in English. However, in order to accommodate students (from non-English speaking regions and the Japanese community) with little or no English proficiency, A-JIS has a highly unique (possibly one of a kind in Asia) ‘Intensive program’ which provides an English immersion program at grade level while maintaining the other studies in regular subjects.

When students are deemed able to attend standard classes conducted entirely in the English language, they are then transferred to what A-JIS calls its ‘mainstream’ classes.”

Another feature at A-JIS is its extensive Japanese program, which provides daily Japanese lessons for students. This program not only meets the needs of the non-national students living in Japan, whose parents see it as an ideal opportunity for their children to acquire fluency in Japanese; it also fills the need of those already with a Japanese language background, to keep up with and further their Japanese proficiency during their time at the school.

“As a result of these intensive language programs, those who study at A-JIS are able to become fluent in at least two languages and thereby able to succeed in the East and in the West.” Remarked Neal Dilk, long time administrator of A-JIS.

Mr. Dilk, head of A-JIS since 2010, will be moving abroad with his family to pursue a new career opportunity this year. Among other accomplishments, he has been instrumental in developing and implementing curricular improvement plans to gain International Baccalaureate (IB) as well as establishing the tailored high school learning program for A-JIS.

Royce Jacobs, formerly Head of International Secondary School in Tokyo, has since been appointed the new head of Aoba-Japan International School. Mr. Jacobs has pioneered many individualised learning programs both in Japan and the United States; and has worked in education for the past 12 years, as a teacher, an administrator and a head of school.

He joined A-JIS last year as its high school principal and has been working with Mr. Dilk on projects to further the advancement of A-JIS in terms of the program, curriculum and extra curricular offerings.  He has also been instrumental in expanding the learning support program for A-JIS, which offers leveled support for students with mild to moderate learning needs.

With its new location in Hikarigaoka and expanding student body, A-JIS is continuing its pioneering approach to education that has made it such a popular choice for international parents living in Japan.

A-JIS is scheduled to commence school at its new location in Hikarigaoka, Nerima ward (Tokyo) in August 2012.