As the dreadful events of March 11 unfolded, Japan’s most famous female artist decided to do something to help her homeland.

In her own unique style, Yoko Ono flew from New York to Tokyo to initiate her latest project “The Road of Hope”.

Originally planned to commemorate the twin atomic bombings of Hiroshima and Nagasaki, the exhibition gained eerie prescience as the Fukushima power melted down and Japan experienced another nuclear catastrophe.

At the final edition of Mori Art Museum’s art course series “Yoko Ono – The Road of Hope” Ono gave a lecture about her life and experiences of witnessing 3/11 from abroad, and a live performance, during which she wrote a life-sized calligraphic Chinese character Yume (Dream) in front of the audience. 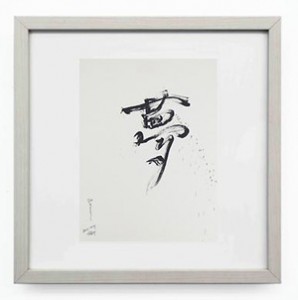 The original calligraphy work for “Dream” has been on show at a public space in Roppongi Hills in central Tokyo.

Now, limited-edition prints of the work “Dream” are now on sale at the gallery, with all of its proceeds to be donated as part of Yoko Ono’s continued support to the construction of the Rainbow House.