Freescale: Leading the way in the new embedded world

Win a Sony e-reader! See below for details.

As computer pioneer Alan Kay once said, “The best way to predict the future is to invent it.”

The future of the semiconductor industry, which provides computing chips for everything from laptops to refrigerators and embedded processing for applications such as smart phones, industrial appliances and automobiles, is rapidly changing the way we live and work.

No longer will we rely exclusively on desktop or even laptop computers to provide information or manage our world. The next trend of the information age is embedded computing where we will be much more connected to the world around us.

One of the companies on the cutting edge of micro processing technology is Freescale Semiconductor, a Texas-based semiconductor manufacturer.

As you read this, teams of Freescale engineers, scientists and designers are busy working on the next wave of embedded processing solutions; technology which is at work in things we see and touch every day.

In fact, if you buy an e-reader, tablet or smart phone this Christmas, there’s a good chance you will be using chips and sensors developed in Freescale labs.

Now the company, which has had a Japanese office since 1968, is making huge inroads into the country and helping to invent the future.

Over the past seven years, Freescale Japan has been hiring increasing numbers of young graduates, as part of their expansion here and this, says Freescale President David Uze, is just the beginning: 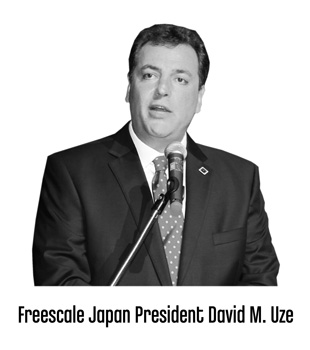 “We are excited to be expanding in Japan,” Uze says.

Despite the uncertainty caused by the March 11 earthquake, Uze is convinced that high tech industries have a bright future in Japan and he sees increasing opportunities for foreign companies to grow in the Japanese market.

“I have worked in Japan for more than 20 years and I look forward to continuing to invest my time and energy here,” he says.

“The reason I believe we must focus on Japan is because it is the most macro-economically focused culture in the world. Japan is the only country I know of where companies routinely create 50-year plans to ensure they are a strong economic force in the long-term.”

When the class of 2012 graduate next spring, many will worry about the state of the job market they are entering.

Hearing the president of a global company speak with such enthusiasm will come as a refreshing change for many graduates accustomed to daily doom and gloom in the financial press.

Could this so-called Embedded Age be the next driver of our global economy? Uze thinks so:

“It is my belief that semiconductors will replace oil as the key driver of our planet’s civilizations.”

He elaborates, “With the advent of hybrid and electric transportation, it is clear to me that humanity will wean itself off of oil.

In the past, oil was needed for private vehicle transportation and semiconductors were not. Today, both are absolutely required.

In the future, semiconductors will be used more and more in vehicles, and oil will ultimately become far less relevant, in my opinion.

Were I a student today, I would want to be a part of the next boom: The Silicon Boom!”

Establishing a strong tie to university students is key to tapping into the ideas of tomorrow as well as providing a pipeline of talent for future engineers.

To encourage more student applications and to spark an interest in engineering as a career, the company is introducing the “Freescale Cup” (a company sponsored robot car race), to Japan for the first time next year.

Making the World a Smarter Place

Beyond building robotic cars Freescale semiconductors power airbags, braking, navigation and engine control systems in vehicles all around the world.

One of the company’s highest profile customers is Porsche, and Freescale is one of the main sponsors of the 911 Carrera Cup (see main image).

“From a business perspective, the earthquake created a lot of uncertainty for companies because of supply chain problems.” Uze says.

“These problems were most visible in the empty supermarket shelves in Tokyo, but across all sectors, Japanese businesses have been forced to rethink their strategies.

Many large, industrial corporations—famous in the business world for their conservative, cautious attitudes—are now increasingly looking to international companies to partner with as a direct result of the earthquake.

This isn’t to create a second (back-up) source of supplies but a dual source. In a globally competitive market, businesses simply can’t afford to risk interruption,” he maintains.

“Our first concern, after March 11 was of course, the people of the Tohoku region.

Thanks to support from our CEO and employees around the world we joined other companies in sending food, water and other necessities to disaster-struck areas immediately after the disaster.

We shipped 20 tons of supplies from overseas and sent a caravan of another 20 tons from Tokyo and Nagoya as fast as we could find supplies and fill the trucks.

What we’ve seen over the past few months is a miraculous recovery by the Japanese industrial complex and is a tribute both to the people of Japan and the companies who want to see Japan succeed.”

Recruiting multicultural staff is standard in most countries and is becoming one of the key factors for global business success, even in a country like Japan that is famed for its cultural uniformity.

Uze says being a foreign boss in Japan and having international employees is a huge advantage.

“We are a global company with customers, partners and employees all over the world,” says Uze.

“The staff in our Tokyo office reflect this. We have employees from many countries, including India, China, Europe, the U.S. and—of course—Japan. Our customers are multinational companies, so they need us to be diverse to help them be successful in the global market.”

“I’m not your typical Japanese boss,” Uze comments. “As an American, I believe being a foreigner in Japan can be a competitive advantage, if you are willing to be flexible and learn about other cultures.”

With increasingly strong yen, sluggish demand at home and the tragedy of March 11,  Japan clearly has problems.

It is technology pioneers such as Freescale who will hopefully show the way for international companies to expand in Japan despite the business climate, further creating the ground for innovation here, giving the next generation of engineers new career opportunities in an increasingly advanced international technology market.

Click here to enter a prize draw to win a Sony e-reader, supported by Freescale Japan!

To learn more about Freescale visit the official site: www.freescale.com