Say Hello To The New Asimo

With a further advance in autonomy, the all-new ASIMO can now continue moving without being controlled by an operator.

With significantly improved intelligence and the physical ability to adapt to situations, ASIMO took another step closer to practical use in an office or a public space where many people come and go.

“Since the establishment of the company, Honda has continued to take on new challenges in the effort to create new products and advance technologies with the spirit of utilizing technology to help people.” Honda said.

“In the area of humanoid robot research, Honda has been developing and advancing the ASIMO humanoid robot to realize a dream to be useful for people and to help enrich people’s daily lives.”

Honda has a newly established collective name, Honda Robotics, to represent all of its robotics technologies and product applications created through its research and development of humanoid robots.

While continuing the research and development of humanoid robots, Honda is also focusing on applying robotics technologies to mass-produced products and putting product applications into practical use.

Honda said the all-new ASIMO is now advanced from an “automatic machine” to an “autonomous machine”, with the decision-making capability to determine its behavior in concert with its surroundings such as movements of people.

Honda identified  the following three factors as necessary for a robot to perform as an autonomous machine. “With these capabilities, the all-new ASIMO takes another step closer to practical use in an environment where it coexists with people.” Honda said.

1) High-level postural balancing capability which enables the robot to maintain its posture by putting out its leg in an instant.

2) External recognition capability which enables the robot to integrate information, such as movements of people around it, from multiple sensors and estimate the changes that are taking place.

3) The capability to generate autonomous behavior which enables the robot to make predictions from gathered information and autonomously determine the next behavior without being controlled by an operator. 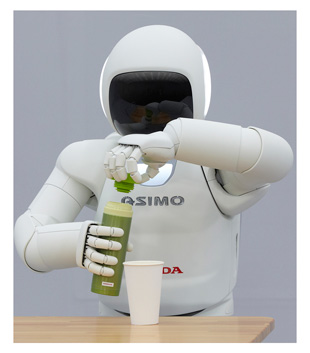 Honda has developed a new system that is a fundamental technology for advanced intelligence, which comprehensively evaluates inputs from multiple sensors that are equivalent to the visual, auditory, and tactile senses of a human being, then estimates the situation of the surrounding environment and determines the corresponding behavior of the robot.

With this technology, ASIMO became capable of responding to the movement of people and the surrounding situations.

Coordination between visual and auditory sensors enables ASIMO to simultaneously recognize a face and voice, enabling ASIMO to recognize the voices of multiple people who are speaking simultaneously, which is difficult even for a human being to accomplish.

ASIMO is now capable of predicting the direction a person will walk within the next few seconds based on information from pre-set space sensors and quickly determining to take an alternate path to avoid a collision with the person if the estimated locations of the person and the ASIMO intersect.

The combination of strengthened legs, an expanded range of leg movement and a newly developed control technology that enables ASIMO to change landing positions in the middle of a motion has enabled ASIMO to walk, run, run backward, hop on one leg or on two legs continuously.

As a result of acquiring the ability to make such agile motions, ASIMO has become capable of more flexibly adapting to changing external situations so that it can, as an example, walk over an uneven surface while maintaining a stable posture.

Honda has developed a highly functional compact multi-fingered hand, which has a tactile sensor and a force sensor imbedded on the palm and in each finger, respectively, and which acts to control each finger independently.

Combined with the object recognition technology based on visual and tactile senses, this multi-fingered hand enables the all-new ASIMO to perform tasks with dexterity, such as picking up a glass bottle and twisting off the cap, or holding a soft paper cup to pour a liquid without squishing it.

ASIMO is now capable of making sign language expressions which require the complex movement of fingers.

Key specifications of the all-new ASIMO