Polaroid, the 70-year-old brand loved by everyone from Andy Warhol to The Beatles has been reborn—with a little help from superstar creative director (and huge Polaroid fan) Lady Gaga.

To the new Polaroid THREE, a camera-printer hybrid that looks and feels like a retro Polaroid, rebooted for 2011. Yes, ladies and gentlemen, instant is back!

“Polaroid is such a great brand. We couldn’t let it disappear.” Says Junichi Fujimoto.

“Polaroid is such a great brand. We couldn’t let it disappear.”

“When we did market research we got very positive feedback, ‘Polaroid’ is almost a verb—so there is still very strong brand recognition across all ages.”

He has played an integral role in the growth and development of Japan’s IT sector, most notably his involvement in internet liberalization as the co-founder and President of livedoor Co., Ltd., the first ever free internet service provider in Japan.

After having built Livedoor and making it the leading free ISP in Japan, Junichi sold his stake and left the company in 2000 to tackle other challenges.

Junichi has founded and led numerous internet businesses in Japan, including eZuz Japan, which he listed on the Nikkei in 2006.

Junichi admits the launch of the new digital-analogue Polaroid range is a bold move, especially after the original company went bankrupt, but he is very confident the new range of products will sell, especially here in Japan.

“Obviously it’s a very different approach and we are very excited. It’s definitely the re-start of the brand.”

“A lot of people thought that analogue would disappear, but I think the core feeling of sharing happiness will never change.”

“We are making sure we’ll be the leader in this area, as Polaroid once was.”

The new Polaroid “Grey Range” is a re-launch with a difference; the DNA of the vintage Polaroid remains—injected with digital, mobile-friendly technology, much of it developed right here in Tokyo.

“The new Polaroid “Grey Range” is a re-launch with a difference.”

Take the GL10, a palm sized printer that can be connected to a laptop or digital camera. The GL10 integrates seamlessly with Japanese smart phones and prints instantly, just like the original Polaroid did.

The device is a joy to use, and although the printer will not be released until later this year, Junichi says pre-order sales have been very promising. (To see one in action head to Docomo lounge in Yurakucho).

With a specially developed Android application you can write messages like ‘Happy birthday’ or ‘I love you.’

Polaroid clearly aims to keep the brand ahead of the competition but Junichi says he is not competing with Canon and Nikon.

“We can’t compete in terms of mega-pixels, we want to stick with the core business of happiness and sharing the moment in an instant.”

But Junichi insists the Poker Face singer is more than a poster girl for the company.

“I met Lady Gaga and we talked about the vision for the brand, she is very smart.”

“We had a lot of creative sessions in Japan when she came over last year. The Grey Range is totally Gaga, right down to the new ‘G’ logo.”

“The Grey Range is totally Gaga — right down to the logo.”

If any product was shaped by Lady Gaga, it has to be the GL20 sunglasses. The futuristic ‘wearable camera’ was unveiled at CES 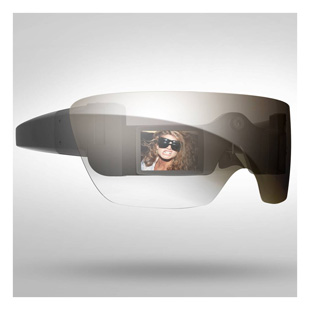 in Las Vegas early this year.

Wearers can shoot images in clubs or at events and instantly show the pictures to friends via built in screens.

“It’s definitely a new idea,” Junichi says “But it matches our philosophy of sharing with people around you.”

The company is doing final testing on the glasses, and all three products are due to be released before Christmas this year.

For Polaroid fans the most recognizable product in the range must be the GL30, a device that looks and feels like a retro Polaroid camera in every way.

The camera can take pictures and print instantly, but can also save images onto a disk, share them with another device, or if you flip the GL30 on its side, display them as a digital photo frame.

All devices in the Grey Range use “zero ink” technology, a new type of photo paper that contains millions of crystals which are color-activated by heat.

The paper simply slots into camera or printer and is ready to go. As Junichi points out, “Z-ink paper is very convenient and environmentally friendly; you’ll never need to buy ink cartridges.” 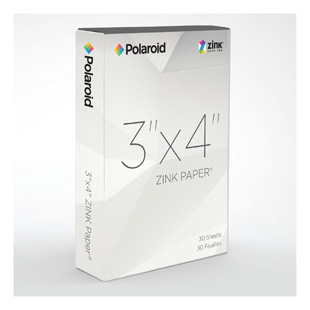 Holding a new printer, Junichi says “The culture of printing and sharing is something we should keep and I think people all over the world will appreciate it from now on.”

As smart phone and tablet sales continue to grow worldwide, Polaroid’s comeback will mean a new generation of users can keep and share their special memories forever.