The annual art show, which was held at the Tokyo International Forum from July 29 through 31 with a preview on July 28, was a great success, attracting a total of 43,000 people.

Akira Tatehata president of Kyoto City University of Arts said: “I get the impression that the more times it is held, the fair builds up momentum, with more and more people becoming familiar with it.”

“It’s not like the event was entirely free of the influence of the earthquake, but I really felt that this has become Japan’s main art fair.”

The sixth event of its kind, Art Fair Tokyo was originally scheduled to be held in April, but was postponed due to the Great East Japan Earthquake, which occurred on March 11.

Despite the postponement, the fair attracted 133 galleries from 22 cities in Japan and abroad, and artworks from diverse ages and genres – including antiques, craft, nihonga, modern art and contemporary art – were exhibited and sold.

This year a new event was introduced, “Artistic Practices,” which was developed with the PROJECTS Artistic Committee, a new body aimed at realizing our new 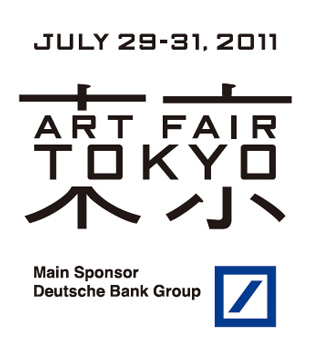 policy of emphasizing Tokyo’s status as a “city within Asia.”

The event included an exhibition of work by two artists – Taro SHINODA and Tadasu TAKAMINE – whose work had been selected by way of a survey of 100 art specialists.

Many talk events were held with the aim of rethinking post-March 11 society through the lens of art. At the “Art Fan!” charity program, handheld fans on which artists had made drawings were sold and workshops for children by the artists who have conducted earthquake-recovery activities were held.

At “Art Prints,” catalogs  and other things donated by galleries participating in the fair were available for sale. Profits from each of these charity programs will be put towards recovery efforts after the Great East Japan Earthquake through the Japan Red Cross Society.