When Coca-Cola Japan introduced ILOHAS in 2009, it was with a simple concept: great tasting water in an environmentally friendly package. Fast forward two years and ILOHAS has shipped over 800 million bottles and scooped up numerous awards including the “3R” (reduce, reuse, recycle) award from the Minister of the Environment as well as being the only drink featured in the Nikkei’s top 20 eco-brands.

Post 3/11, it is understandable for consumers to be concerned about food and drink safety, Shinji Fukue, director of Water at Coca-Cola says ILOHAS’ sourcing and packaging technology is second to none.

“Our standards are much higher than that of the government” he told Weekender “We have very strict inspections—with some 280 checks.”

As much of Japan’s mineral water is soft, it is perfectly suited for making baby formula, brewing green tea or even in cooking.

“Many Japanese people questioned water safety and were very concerned. We have an obligation to communicate and meet those concerns” he said.

The bottled water industry in Japan is relatively new, in the year 2000 people began to drink bottled water, mainly inspired by health conscious celebrities and athletes who drank water for health. Before ILOHAS was introduced, Coca-Cola was obviously a leader in cola, coffee, sports drinks and tea but never in the water category: the launch of ILOHAS changed all that. 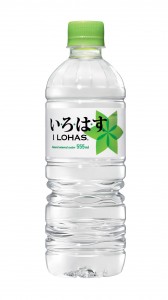 With a more proactive and fashionable crowd getting involved in recycling, consumers in Japan were eager to do something to help. Food mileage and water milage became popular topics in the media, yet most domestic brands were of little assistance.

After the year 2000, “Information flow changed world-wide” said Fukue, “Surveys told us that 94 percent of customers thought their behavior affected the environment, but 51.8 per cent didn’t know what to do about it yet wanted to feel involved. Advances in technology allowed us to significantly cut down on packaging weight and therefore CO2 emissions.”

The most iconic thing about ILOHAS has to be the ‘plant bottle’. The green capped PET bottle has been specially designed to be crushed after use for easier recycling. This simple action gives drinkers the chance to aid the environment with a visible (and pretty enjoyable) action.

Produced domestically in Japan the innovative packaging is made from plant-based materials and uses 40 per cent less resin than Coca-Cola’s conventional bottles, everything from the iconic green cap to the label and transport boxes has been created with weight-reduction in mind. Lighter bottles means less natural resources used in manufacturing and less CO2 produced in transportation—which has to be a good thing.

“We looked at plastic bags, pouches and even paper as potential containers,” Fukue said.

Designing packaging to exact specifications is not easy; bottles still have to be stacked and transported, meaning they need to meet high standards of strength and durability.

On June 15th ILOHAS launched its new “7 water sources” TV spot, this advertising campaign was created to highlight ILOHAS’ unique sourcing. ILOHAS is drawn from 700 meters underground at sites spread around Japan including Kiyota, Sapporo, Yamanashi, Shizuoka, Tonami, Tottori and Miyazaki. To put things into perspective: Japanese beverage giant, Suntory, has just three water sources. Coca-Cola said this campaign is one of the responses to new consumer demand for information on mineral water after 3/11.

For those very concerned about the quality of water, Coca-Cola also employs special radiation detection at all sources which they “double and triple check.” After the unexpected surge of need following the tragedy in March, Coca-Cola’s Fukue said “we are operating at full capacity” and “monitoring output to meet customer demand.”

Through listening to customers needs and applying inventive thinking, Coca-Cola is one of the first high-profile companies to take a step in the eco-friendly direction.