Former Boomtown Rats pianist Johnnie ‘Fingers’ found fame on the back of the 1979 controversial number one hit I Don’t Like Monday’s. He has been in the music industry in Japan for nearly 20 years and as part of the Fuji Rock team—organizers of Asia’s largest live music festival—he has seen it all from Rage Against the Machine and Oasis, to Roxy Music and Thom Yorke. Over 110,000 people are expected to attend the enormous Naeba based festival this year, including a significant number of foreigners—the BBC estimates that “between 5 and 10 percent” of the audience  come from the UK, Australia and the US.  Weekender sat down with the charismatic gaijin to discuss this year’s rock-fest over a pint of Guinness.

Weekender: You’ve probably been asked a million times but, How did you come to Japan?

Johnnie Fingers: I was sponsored by a music publisher to come and write music… I thought I would come for a year! I wrote some music and I was always interested in producing bands, even when I was in the Boomtown Rats I was more into musicology and recording, so I began to produce rock bands. I enjoyed that a lot, but after a while I just got fed up. I didn’t know what to do: go back to the UK or stay in Japan. I liked Japan a lot. I liked it when I came here on tour—maybe I was Japanese in a previous life—I have always been fascinated with the country. Now that I do a lot of dance music production and scouting for bands, I can meet a lot of people as a gaijin. I do a lot of traveling abroad to Europe and the US looking for new bands.

W: Are you planning a Fuji-Boomtown Rats reunion? W: Do you still speak with Bob Geldof?

JF: I still email and Skype the old members—we are all still in touch.

JF: Rage Against the Machine were really surprising. I never thought I would like a band like that, but I watched them live, they were probably the most exciting band I have ever seen. Unbelievable. Just stunning.

JF: I always wanted to get Depeche Mode, but now I think Pearl Jam, they haven’t played Fuji Rock yet. We’re always concentrating on what’s coming next year so you never know. It doesn’t need to be a main stage band though, some of the smaller, lesser known bands are equally fantastic.

JF: I saw The Middle East (from Australia) at South By South West (SXSW) last year, probably one of the best bands I have ever seen but they are not very commercial; they make very lonely evocative music. I’m really looking forward to seeing them at Fuji this year. JF: Fuji Rock over the years has become a whole group of communities, there are people who only stay by the main stage, and people who hang around the Orange Court and wouldn’t dream of going to the White Stage. That just developed—we never thought it would be quite as expressive as that. We do create different feelings in different areas; last year we made the Pyramid Garden behind the hotel, we only got around 30 people there last year, it is very chilled out and they serve nice organic food, it (was) a bit of a secret, but in three years time it will probably be booming.

W: How did bands respond to the 3/11 earthquake?

JF: After the earthquake the first thing we did was give all the managers an update of what’s going on. A week after 3/11, I went to SXSW to check out new bands, most agents and bands thought I was lucky to be alive! That’s the power of the media, over-sensationalizing what actually happened. I had to tell people ‘Tokyo is fine, so a summer festival will be fine,’ we postponed most shows in the following months, because understandably nobody wants to see bands after such a terrible event—no one would buy tickets and bands didn’t want to come either. It was a financial reason, but also an emotional one.

W: What did people do to help?

JF: We told people through our website that Japan was OK, but needed help from other countries. We held an event at the Brixton academy in London, basically organized by Liam Gallagher (Oasis, Beady Eye). He got all his mates together and did a big show, it was really successful and sold out straight away. That did a lot to raise awareness for the disaster. The ‘quake had a knock on effect on the music industry here, if venues in Tokyo do no business, neither do hotels and instrument rental companies. When a band comes to Tokyo you realize there is a huge support system of all these companies that suffered too. JF: Ticket sales were slightly down from previous years, but we have a very strong line up. I think it will be a very emotional festival this year. This really is the first major event where the audience have the freedom to just gather together and just have a cathartic experience, and let go. Fuji is a communal experience anyway: there is camping and you have to physically go there, as it’s out of town, so once you’re there—you are there for the weekend.

W: Did any bands pull out?

JF: We haven’t had any cancellations, which is odd, because usually we do. Most of the bands just want to come over, they feel safe, and it will be good for Japan.

W: The first Fuji Rock is now legendary, what was the atmosphere like?

JF: The first Fuji Rock in 1997, was really difficult to organize since it had never been done before. We caught the tail-end of a hurricane—it didn’t seem so bad at first—the opening day was OK, but the second day we got the full onslaught and had to cancel. Most people arrived, totally unprepared. They thought everyone would stay in a hotel, so people were arriving in shorts and flip-flops! We got a lot of negative media ‘dissing’ the festival long before it happened, the audience was really tired, our staff were really tired, so we decided not to do a second day—even though it turned out to be  beautiful and sunny. For the second year, we knew things would be very different. We had to educate the audience more and we learned from the mistakes that we made. You must understand, that doing a rock festival was like something from outer space for the locals, people asked questions like ‘where is the orchestra pit?’ and ‘will the music affect the birds?’ all valid questions—because people just didn’t know!

W: Fuji Rock is dubbed the “Cleanest festival in the world” did you plan it like that?

JF: It is somewhat of an illusion, when people go camping they are not naturally clean. We trick the audience a little, in the Red Marquee area, after a show the audience goes out and we clean the whole place, and get it spotless, people think ‘wow! it’s so clean’. That runs through everything, when the festival closes at night, we clean up everything ready for the next day. Many international festivals now copy us. The audience do a lot to help, after all it is their festival—not ours.

W: How many staff do you have? 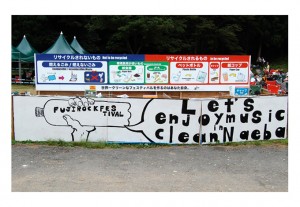 JF: Around 20 staff from the Smash office but over 2,000 volunteers.

W: During the festival do you get to watch all the bands, or are you too busy?

JF: I am busy during the day until about 7-8 p.m. but I party all night until 5 a.m. You just push yourself that bit harder. But afterwards, I need about a week off to recover.

W: Do you camp out or stay in the hotel?

JF: Hotel. Once I went to Glastonbury (in the UK) and camped out for four days, I ended up seeing just one band! That’s kind of an accident, you can hit the festival on any level you like, seeing friends, watching bands, or just enjoying being outdoors. We think it’s important that people coming to Fuji Rock see things they have never seen before, come to the Palace of Wonder, or the Orange Court to see some African musicians you never would have known about, or see a rock icon, and suddenly discover why this guy is famous. Fuji has that energy. 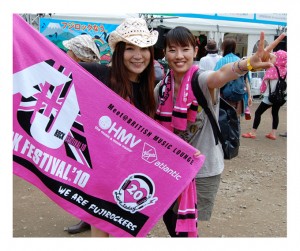 JF: On our blog we asked people what people liked the most, ‘what’s the most important thing?’ they said ‘the food’. We always try and mix it up, many people coming from across Japan may never get the chance to experience international food, they may say ‘I don’t like Thai food’ but at least they can try something different, for pretty cheap.

W: What do message do you send to first timers?

JF: Prepare for all weather. The most important thing, bring clothes that you are quite happy to throw away when you leave the festival. Although Fuji is very noted for fashion and people have a style of their own—it’s not a catwalk. Dress comfortably and bring clothes you don’t particularly care about. And bring a little first aid kit, band-aids come in handy.

JF: It’s a very ‘60’s thing but if you are at a festival and you see someone having a rough time, don’t walk by. It’s an opportunity to help someone—that’s very important.