A Level 7 Failure in Leadership

Leadership in a crisis requires taking immediate, decisive action, and communicating how that action will alleviate the situation. Action and communication in a crisis can be divided into three steps: 1) expressing and demonstrating concern for those affected; 2) cooperating with public authorities; 3) taking corrective action. Despite their simplicity, these steps are difficult to follow because they require the courage of a leader to stand up and take responsibility for getting things done. There can be no idle talk.

A leader must express concern and offer cooperation when the problem arises—before the news media are tapping on the window of his limousine, and definitely before the public has begun shouting for his head. Akio Toyoda’s slowness to speak up last year when there were concerns regarding unexpected acceleration in Toyotas is a good negative example. 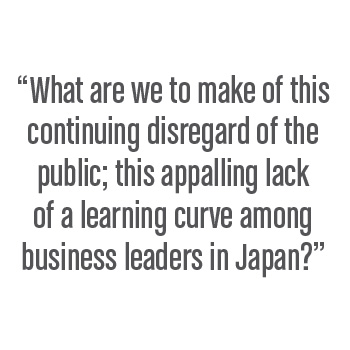 The questions about Toyotas had smoldered for months and beginning in early 2010 erupted into a media firestorm. For six weeks industry analysts and media asked why Mr. Toyoda had not expressed any concern, let alone presented a plan to cooperate and investigate the questions. By the time an NHK TV crew tracked down Mr. Toyoda at the Davos Conference, much of the business world was watching. His brief, nervous interview appeared to be that of a man with something to hide. That he fled in an Audi (official sponsor of the conference), made it a mockery. Stakeholder confidence in Toyota was melting down and the CEO was rushing off to rub elbows with the world’s elite. Though U.S. regulators eventually cleared Toyota of the accelerator problem, the damage was done. Stakeholders had already decided there was a problem with Mr. Toyoda.

In the case of TEPCO, which has a shaky record of compliance, and is viewed as being in a colluding and corrupt relationship with the government regulatory agency (amakudari), the company is already suspect. A leader in this situation might take even greater strides in dealing with the crisis—showing more concern and displaying greater and more immediate action to correct the situation. Instead, TEPCO CEO Masataka Shimizu checked into a hospital while his managers and rank-and-file employees—including many from Tokyo—raced to Fukushima to fight the meltdown. This has to be one of the most notable incidents of a CEO’s disregard for corporate and civic duty in recent times—and the competition in that regard is tough.

As soon as the Fukushima reactors were cooling, Sony blew up with a double bombshell—the theft of the personal data of up to 100 million online customers and the failure to notify the public for more than a week. Then there was the Ebisu yakiniku restaurant chain serving contaminated raw meat to customers resulting in several deaths. Ebisu joins the long line of food industry disasters that includes Snow Brand (Yuki-jirushi) and Meat Hope.

What are we to make of this continuing disregard of the public; this appalling lack of a learning curve among business leaders in Japan? Spare me the argument of cultural traits such as dispersed decision-making and uncertainty avoidance. Japan’s elite class has proven incapable of developing leaders. For every Junichiro Koizumi, there is an Ichiro Ozawa; for every Masayoshi Son (Softbank) and Yoshito Hori (Globis), there are busloads like TEPCO’s Shimizu. The only way to make these leaders listen is to make them financially and criminally accountable. Then, and only then, will they become acutely aware of the consequences of their failures to take action.

Gil Chavez is a media marketing consultant and professor of analytics, Globis University IMBA. He also teaches corporate and marketing communications at the International University of Japan and Temple University.