Richard Lloyd Parry has had a front row seat on one of the biggest stories to jointly grip the British and Japanese press over the past 10 years: Lucie Blackman’s disappearance and the subsequent trial of her accused killer, Joji Obara. If you spent any time in Tokyo in the last decade, you would have come across newspaper and magazine accounts of the case, and quite possibly met one of the many people who were tragically swept up in its wake. Filled with drama and mystery, the story was ripe for people to put forward opinions and theories, but at its center, in the form of the serial rapist Obara, was the unknowable. Now, the Tokyo-based journalist has released his definitive take on one of the most gruesome crimes that the modern Japanese police force has ever had to tackle

“Almost everything in this case, it’s almost as if it was calculated to cause maximum damage to the people left behind,” says author Richard Lloyd Parry at the Foreign Correspondents Club of Japan earlier this month. “Joji Obara’s character and demeanor is one of the elements of that. He never admitted a thing. It wasn’t a matter of not saying sorry, he denied consistently throughout that he had done anything wrong at all. Even with all these videos which he had in all these cases, except for Lucie’s.”

When we spoke, Parry was just about to set off to England to promote the UK launch of “People Who Eat Darkness”, his comprehensive account of all the unexpected paths that the investigation of the Lucie Blackman case took him down, and the agony that it caused all involved, save Joji Obara. In the new book, the veteran journalist presents in depth each of the elements of the case that contributed to this lingering damage, from the seven months when neither her whereabouts nor the reason for her disappearance could be determined to the police incompetence that was the reason for this delay; from the complicated relationship between her parents Jane and Tim to the host of characters and dead-end leads that were players in the tale.

Currently the Asia editor of the British newspaper The Times, Parry covered the story from the start, just after Blackman, a former British Airway flight attendant, went out for a Saturday drive on July 1, 2000 with one of her customers at a Roppongi hostess club and never returned. Her body was found nearly seven months later, dismembered and buried in a shallow seaside cave on the Miura Peninsula, after a wealthy, aimless question mark of a man who was suspected of being responsible for her disappearance was arrested in a dingy apartment near the club in October 2000.

Obara was given a life sentence for the rape of eight women and the rape and death of one more in his first trial, but acquitted of charges stemming from Blackman’s disappearance. In an appeal that that came to its conclusion in 2008, the original charges were upheld, and he was additionally convicted of the kidnapping, dismemberment and disposal of the body of Lucie Blackman, but not of her murder. With a final appeal to the Japanese Supreme, the case dragged on until lasted till December last year, and Parry continued to cover it, meeting not only all those who were immediately involved, including family and friends of the victim, but also with the few people who could tell him about the mysterious man who was accused of perpetrating the crime but had surprisingly been acquitted.

“One of the most striking thing about doing this research was how difficult it was to find out anything about Obara and his family. It was almost as if they went through life erasing the traces they left behind,” says Parry.

“I went to Osaka a couple of times and … spent a lot of time looking into him and his family and his past, and I also talked to half a dozen Japanese shukan shi reporters, hard-nosed tabloid hacks who had been mobilized as soon as Joji Obara had been arrested in 2000 to dig into his past. These are guys who are extremely experienced and good at doing this kind of thing, and they all said that it was almost uniquely difficult to find anything about him.”

“They  said that often when someone is arrested, the family will be reluctant to talk, which is not surprising, but you can always find someone who will talk. But here, there was no one.”

From the other side, Lucie Blackman’s, Parry had plenty to go on from the beginning. A week after she was reported missing by her roommate, Louise Phillips, Lucie’s sister Sophie Blackman came out to start a search effort, to be quickly followed by their father, Tim Blackman. Sophie and Tim immediately engaged with the media, providing them full access to anything that they wanted to know after their first disappointing meetings with the Japanese police, in order to make sure that the case was followed up.

“Tim made the conscious decision early on to establish close contact with journalists and to use the media to keep the case in the spotlight and to use the media as a form of pressure on the police,” says Parry. “And in doing that, he alienated the police, and his personal relations with them was poor. If he had not chosen to do that, however, if he had kept mum and done as he was told, I don’t think he would have really have learned anything more about what happened.”

One of Parry’s reoccurring themes in the book is a powerful critique of the Japanese police and their almost mind-bendingly poor response to not only the seriously suspicious circumstances surrounding Lucie Blackman’s disappearance, but to the fraught emotional state of the victim’s family members, and most damningly, to previous reports of Obara’s predatory behavior that could have prevented the whole fiasco and saved a staggering number of women from the violations that Obara perpetrated on them. When he was finally arrested, it quickly became clear that he had sexually attacked more than 200 woman after police found the rapist’s own collection of 209 home videos that he had filmed of himself having sex with drugged and senseless victims and his egocentric diary entries that detailed the dates, places and varying cocktails of drugs used on each one.

Parry believes that although the police had so many signs pointing them the right direction before the Blackman case and during it, and that they still took so long to capture such a prolific repeat offender, shows a real weakness in their ability to think creatively when presented with cases that don’t fit the norm or happened outside of proper society.

“The strongest reproach against the Japanese police was not that they had reacted slowly when she had gone missing. Because she was just a girl who had gone missing, and any police force would have given it a few days. Most of the time people show up. They have gotten drunk, or run away with someone or fallen out with their friends,” says Parry. “The biggest mistake they made was in 1992, when they didn’t cotton on to the suspicious circumstances surrounding Carita’s death. Because that was highly suspicious. And there were other reports.” 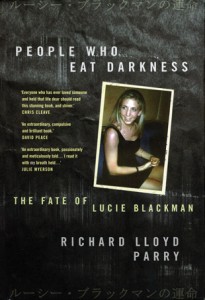 Carita Ridgway was an Australian hostess who had died almost 10 years before Lucie Blackman in 1992 after she had been admitted to a hospital by someone calling themselves Akira Nishida. The trial showed that “Mr. Nishida”, who said that Ridgway had suffered food poisoning after eating a bad oyster, was Joji Obara. When the prosecution was preparing their case against Obara, new investigations revealed that she had died from liver failure that was consistent with poisoning from an excess of chloroform. But the police had never taken her family’s pleas to look into her death seriously, and this was probably due to her occupation.

“My impression is that they deal in stereotypes, and hostesses are regarded as intrinsically unreliable and compromised, certainly in any kind of sexual crime,” Parry says when asked about the police’s complacency. “No policemen ever said that to me. I got this impression from conversations with other people, including experienced Japanese journalists. If a hostess comes forward and says, ‘I have been sexually assaulted in some way,’ the attitude is often, ‘Well, what did you expect?’“