The Place of Sages

Through studying Tibetan Buddhism in Dharamsala I have once again returned to the Ganges and another holy city, Rishikesh (literally, ‘place of sages’) to study Advaita Vedanta with Swami Dayananda at his ashram. Unlike Varanasi, the Ganga runs fresh, cold, and blue-green creating a beautiful backdrop to the ashram as it rushes from the Himalayan peaks through the state of Uttarakhand and southeast to the Bay of Bengal.

Rishikesh is best known for its yoga scene with abundant ashrams and teachers – although not all are equal so I recommend travelers do their research. My day starts at 5am with a puja (offering ceremony) at the ashram temple and ends at 10pm with satsang with Swamiji (kirtan and question period). Swamiji is from the southern state of Tamil Nadu and our 3 delicious sponsored meals all have a Southern Indian flavour and to my delight includes my favourite breakfast pongal (a hot rice, curry and pepper corn mash served with coconut chutney and not dissimilar to porridge). I have offered seva (service) to serve the food at meal times which is a nice way to become familiar with the 300 other ashram residents (95% Indian) as I scoop and ladle the various dishes onto the metal thali trays. Our day is fairly full with 5 hourly+ sittings with Swamiji and a chanting class but still enough time to have a ritualistic 3pm bath in the Ganga (refreshing in this heat) and do my self-practice of yoga asanas.

It has been interesting listening and reflecting on these teaching after my intensive silent Buddhist retreat on Karma and Emptiness, and finding the essence fairly similar. Or perhaps I should say “same, same but different”.

One interesting reflection has been in relation to how we see ourselves from the perspective of both these faiths. While I find this type of question a bit absurd, Tibetans when asked, “What are you?” (in relation to their faith) would respond saying namgpa which means “inner being”. I think this is such a beautiful way to describe ones spiritual intent- to know oneself from within and know the world from within oneself.

On the other hand, Vedanta would ask “who are you” and the answer would likely be one of the Mahavakya’s (from the foundational Vedantic texts, the Upanishads) that indicates the ultimate unity of the individual with God Tat Tvam Asi – “Thou art That”. 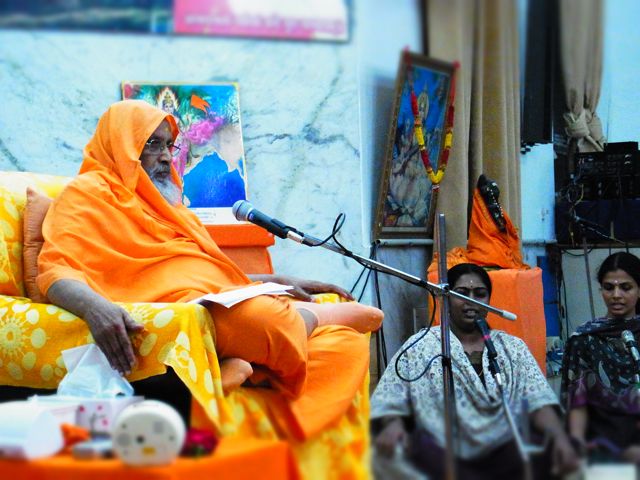