“Affection of idols” by Natsuki Otake is running until April 11 at Omotesando’s Diesel Denim Gallery; an interesting little venue above the Diesel store that has become synonymous with up and coming talent.

The gallery has high reputation for its selection of artists from various genres, such as Timothy Saccenti from Partizan, an attention drawing film director, and Makoto Tanijiri, a young rising architect. The artists who exhibited in this gallery in the past are now playing active parts in their fields. Previous installations have included work by artist Mark Jenkins who was chosen by Time magazine as one of Top Ten Guerrilla Artists.

Weekender went to report on the latest opening party last week and got the chance to interview the artist. See below for a video exclusive.

Natsuki Otake, an artist captured by the glitter of idols.

From her childhood, Otake has been fascinated by the sparkle of eyes, like the dazzling stars seen in idols’ eyes and those of heroines in girls’ comics.

Those have affected everything in her life from drawing manga to start with, down to glitter pens and her diary filled with richly colored decoration. While she was in Tama Art University, she started to express those as an art. In this exhibition, Natsuki Otake’s dynamic style and use of overwhelming colors will sate the viewer with the idea of “an idol today” yet drawn by a Japanese traditional art technique. An encounter with batik, a traditional technique good in recreating brightness and chromaticness, enabled her to acquire the expression of matching the pieces of slik together. At last, she gained her own way to express the girls’ fragile beauty. The most notable feature of Otake’s work is bluish white brilliancy like high-intense liquid crystal and its two-dimensional clearness created by the reflection of the silk.

Close up of work in the gallery 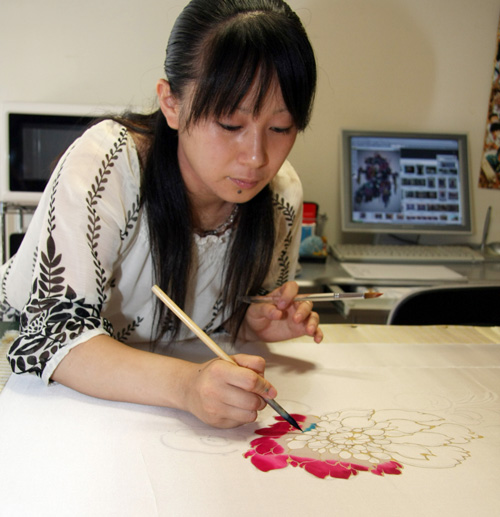 Close up of the silk after mounting

The opening party was a great chance to interact with the work, 3D pieces were suspended above visitors head’s and smaller more intimate canvas’ work explored the theme in a different medium. It was also great to see how the work progressed from portfolio and canvas pieces to the large kimono silks, right through to the Diesel printed T-Shirts, available to buy in the store below the gallery. Idols – focus of people’s envy and desire, making an impact to the society through mass media as a mirror to reflect the times. The words describing them have also changed from “kawaii” to “moe”. While idols have changed their fields of performance from television to other media such as the internet and games, their presence has also become complex and diversified along with our society. Manga artwork on the walls Batik is a traditional way of dyeing, using wax to prevent the pattern part from dyeing. The technique of batik is considered to have existed since the 2nd-3rd century A.D. as the batik cotton cloth was found in Chadota Remain in Niya prefecture of Hsinchiang Uighur Autonomous Region in China. This is one of Japanese traditional dyeing techniques that has been used since Tenpyo era and found in places such as Shoshoin treasures. It has been used to dye “Kimono” and a particular type of Kimono is named “Roketsu Yuzen (Batick Yuzen)” after this technique.

Weekender’s interview with the artist Natsuki Otake at the opening of her show.

Can I buy artworks?

Artworks from past and current exhibitions and original T-shirts can be purchased at DIESEL DENIM GALLERY AOYAMA. Take a look at works by Chi Peng, Jules Julien and Timothy Saccenti on the website. The next Tokyo Weekender, fashion section will include a spread on the latest Diesel collaboration.