by Brett Iimura and Iona Macnab

Specially marked bags of roasted soybeans can be found in supermarkets, temples, and even at your local convenience store. These are taken home and thrown within and out of the house while shouting, “Oni wa soto! Fuku wa uchi!” (“Out with demons! In with happiness!”). Kids especially enjoy having permission to throw food around the house. After the beans are exhausted, everyone collects the number of beans corresponding to his or her age and eats them, further ensuring good fortune will befall them in the coming year. Octogenarians have been known to simply eat one for each decade, however!

Setsubun is known to most non-Japanese as the ‘bean throwing festival,’ but originated as a demarcation of seasonal change. The dark, cold days of winter left people prone to visions of evil and misfortune. To dispel these notions, drive out the evil spirits, and usher in a happier, more prosperous spring (traditionally considered the beginning of the new year in the lunar calendar), this day was observed in a variety of ways, the most famous surviving custom being the throwing of beans. 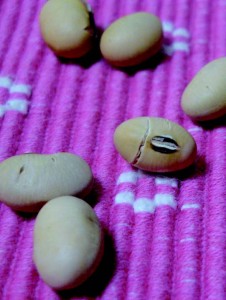 Kindergartens often have a real live ‘demon’ run around scaring the wits out of the kids while their teachers encourage them to bravely stand up to the demons. They are told that if they throw the beans determinedly and directly at them, the demons will be afraid and run away. Amazingly, this always comes to pass and no little ones are borne away by the demons.

Houses are often ‘decorated’ with the head of a sardine, a clove of garlic or an onion, and a branch of holly. These items are arranged near the front door as well as by all of the windows and any other opening to the outside through which a demon may be able to slip in. For obvious reasons, demons are repelled (just like humans) by the smell of rotting fish and garlic. They are also supposedly stung by the sharp points of holly leaves.

A more edible food often seen at the celebrations is uncut futomaki, literally ‘fat-roll,’ better known as the very large sushi roll wrapped in nori seaweed. The 20cm-long roll remains uncut and silence is maintained until the whole of it is consumed so as to bring health, longevity, and good luck in business. Often these rice and seaweed rolls are stuffed with seven differently colored ingredients representative of the seven gods of happiness, or the shichi fukujin.

Around this time of year mini-pilgrimages are often made to any neighborhood in which exists a group of seven local temples, each housing one of the gods of happiness. A small trinket related to each god can be collected, as well as the temple stamps inked into a special book that can be bought at the first temple visited.

The actual bean-throwing ritual has become a huge event at many temples. Thousands of people gather to try to catch the beans that sumo wrestlers, celebrities, and politicians throw out to the crowds. The mamemaki ceremony also included the scattering of 3,333 strips of paper upon which were written excerpts from a particular Buddhist sutra until 1884, when the Meiji government banned it in order to reduce the fatal crushes that occurred as a result of over-exuberant participants. Small packets of sweets or coins, however, are still rained down upon the participants, so watch out for little ones.

There is a belief in Japan that men and women are more likely to experience exceptional misfortune or illness at certain ages. The yakudoshi for men are ages 25, 42, and 61; for women they are 19, 33, and 37, with the middle age being exceptionally ominous. A ceremony can be performed (yakubarai) to dissipate this onerous energy anytime from the year before until the year after as this is considered the period of susceptibility. The bean throwing festival is a particularly auspicious time for 42-year-old men to participate in this ritual, with some temples providing haori (kimono half-coats) and hakama (kimono ‘trousers’) to wear as the men all line up, march onto the stage, are blessed, and then vigorously cast out their bad luck with their beans.

Parenting Tip: One of biggest and most famous yearly bean throwing festivals is held at the oldest temple in Tokyo, Senso-ji in Asakusa, founded in 628 and last rebuilt in 1958. The ceremony this year will be held on February 3. The yakubarai ceremony, including bean throwing by local dignitaries, will take place at 10:30am and 1:30pm, followed by a performance of characters portraying the seven gods. At 10am children from a local nursery school gather to be ‘attacked’ by demons, another Japanese photo opportunity!