As the mercury drops and more and more expats leave town to visit family in their home countries, Japan can start to seem like a lonely place for those of us who are left behind. This is especially true after December 26, when all evidence of Christmas decorations disappears, leaving the formerly festive streets looking comparatively drab. But don’t resign yourself to a winter depression just yet—from Hokkaido to Okinawa, Japan offers some great ways to beat your cabin fever.  Read on for some of Weekender’s top picks…

With some of the steepest slopes on offer, combined with dry, deep powder snow set against a breathtaking alpine backdrop, it is little wonder that Hakuba is well on its way  to becoming the winter sports destination of Japan—minus the planeloads of foreign tourists! Nestled in the Northern Alps of Nagano, Hakuba is comprised of three main ski areas:ΩHappo-One and the linked snowfields of Hakuba 47 and Goryu. With over 200 runs out of ten resorts, there is terrain to suit all skiing and boarding abilities. And of course onsen (hot springs) abound in Hakuba Village; having a soak is the perfect way to wrap up a day on the slopes.
Travel: Two and a half hours from Tokyo via the Shinkansen to Nagano, followed by a bus to Hakuba Village.
www.hakubatourism.com

What would the Japanese Christmas/New Year period be without illuminations? Through December 31, the city of Sendai in Miyagi prefecture will be shining brightly during its 24th annual illumination festival. Hundreds of thousands of lights take over Sendai’s main streets, with no object left untouched—or unlit. The theme for 2009 is  ‘Dream and Desire,’ and various parades and celebrations will be staged from 5:30 to 11pm every evening. Also look out for ice skating in the Sendai Winter Park. Tip: if the winter night is too cool to brave, jump on the city’s sightseeing bus, Loople Sendai, which has a special ‘Pageant of Light’ route, taking in the best of the festival.
Travel: 100 minutes via Shinkansen from Tokyo direct to Sendai (trains departing every 30 minutes).
www.sendaihikape.jp

Rocket off to Fukuoka… Incredible rides, parades and zany, larger- than-life characters…no, this isn’t Disneyland, it’s Fukuoka’s Space World! For a family holiday completely out of this world, look no further. With the Space Museum chronicling mankind’s journey into outer space, merry-go-rounds, movies, jet coasters, water rides and ice skating, there is something for both the little and the big kids. Space World aside, Fukuoka itself, a historical port-side town, has plenty of sightseeing opportunities and  great cuisine. Now is the perfect time of year to tuck into some motsunabe or mizutaki (Japanese hot stew dishes).
Travel: Under four hours via air and bus/train. JAL flies from Haneda airport to Fukuoka airport over 15 times a day, with buses and trains departing from Fukuoka airport to JR Space World station. For the perfect R&R getaway, look no further than Beppu’s glorious hot springs. Situated between the mountains and the sea of northern Kyushu, the quality of onsen bathing available in Beppu is unrivaled. Soak in traditional hot water pools or try something more unique, such as a steam or mud bath, or even naturally-heated sand baths—if you can take being buried up to the neck in soft, warm sand. The waters from each onsen offer bathers different minerals and metals with numerous health benefits ranging from lowering blood pressure to clearing up skin…all on top of what a good, long soak can do for you!
Travel: Approximately two and a half hours via air and bus. JAL flies from Haneda airport to Oita airport six times a day. There is a bus service between Oita airport and Beppu city.
Tel: 0977-23-1119 (the Foreign Tourists Information Office)
www.city.beppu.oita.jp

For a luxury spa escape without leaving the city, check in to the Ritz Carlton Midtown for the hotel’s winter spa package. In addition to your choice of a 60-minute ESPA signature facial or body treatment, the package also includes overnight accommodation in a deluxe room, a breakfast buffet, and an ESPA cleansing bar to take home. Occupying the top nine floors of the 53-story Midtown Tower, what makes this hotel so grand are the panoramic views of Tokyo and the two world-class restaurants it hosts. For the second year in a row Japanese restaurant Hinokizaka was awarded a Michelin star, and the breakfast for this package is served at modern French restaurant Forty Five, located on the 45th floor. You can slowly enjoy your first meal of the day with a clear view of bustling city at your feet. Relax and take your time, as early check in and late check out is included. Starting at  ¥64,289 per night, the package is valid Sunday to Friday through March 31, 2010. For a unique cultural experience, escape the city and head to one of Japan’s most sacred and beautiful sites in the UNESCO world heritage town of Koyasan. Spend an unforgettable night in a buddhist monastery and wake early to the chants of the monks before enjoying a healthy vegetarian breakfast. Home to some of the most picturesque temples in the country, Mount Koya is the founding place of the Shingon sect of Buddhism. The mountain’s giant cedar forest hides the Okuno-in, or the Inner Sanctuary—and a series of temples and a graveyard dedicated to the souls of famous Japanese, including the samurai ruler Toyotomi Hideyoshi. Located South of Osaka, the journey is an adventure in itself, involving an electric railway and a dramatic cable car ride to the top of the mountain.
Travel: Approximately five hours by Shinkansen, the Nankai Electric Railway, and a scenic cable car.
www.shukubo.jp/eng One of the most popular and easy weekend getaways from Tokyo is a trip to Hakone. Easily accessible from Shinjuku via the ‘Romance Car’ train, the trip begins as you pass stunning views of Mount Fuji along the way. Most Tokyoites flock to Hakone for the sulphur onsen, fresh air, and natural beauty of Mount Fuji and lake Ashi. In addition, popular museums to visit include the Open-Air Museum, with works by various contemporary artists including Picasso, and the Pola Museum of Art, featuring pieces by Renoir and Monet. But if you are looking for a truly unforgettable experience, stay at the Fujiya Hotel in Miyanoshita, Hakone. The hotel opened in 1878 and was the first resort hotel in Japan. Famous former guests include John Lennon, Albert Einstein and President Eisenhower. Known for its majestic and classic design and antique décor, this historic hotel is truly a magical place.
Travel: Approximately 85 minutes via ‘Romance Car’ limited express train from Shinjuku (trains departing at least once an hour). Buses and local trains stop near the Fujiya Hotel.
www.hakone.or.jp/english
www.fujiyahotel.jp Located off the coast of the Izu peninsula are the Tokyo Islands, so named because they are actually a part of the Tokyo municipality, despite some of them being as far as 2,000 kilometers off the coast. The closest (and one of the largest) islands in the chain is Oshima, easily reachable by plane or high speed ferry from Tokyo. A volcanic island in nature, Oshima has been shaped by the active Mt. Mihara, which stands at its center. The island is also home to lush forests, black sand beaches, Japan’s only official desert, fantastic views of Mt. Fuji, and an estimated three million camellia trees. Oshima Park includes tennis courts, an outdoor pool, and one of Japan’s most well-kept zoos. Activities available on the island range from scuba diving to cycling and hiking, and the camellia festival is held from January to March, during which time the island
is covered in bright red and pink blossoms.
Travel: One hour and 45 minutes by high speed ferry from Tokyo’s Takeshiba pier, or 35 minutes by plane from Haneda airport.
www.town.oshima.tokyo.jp
www.tokyo-islands.com 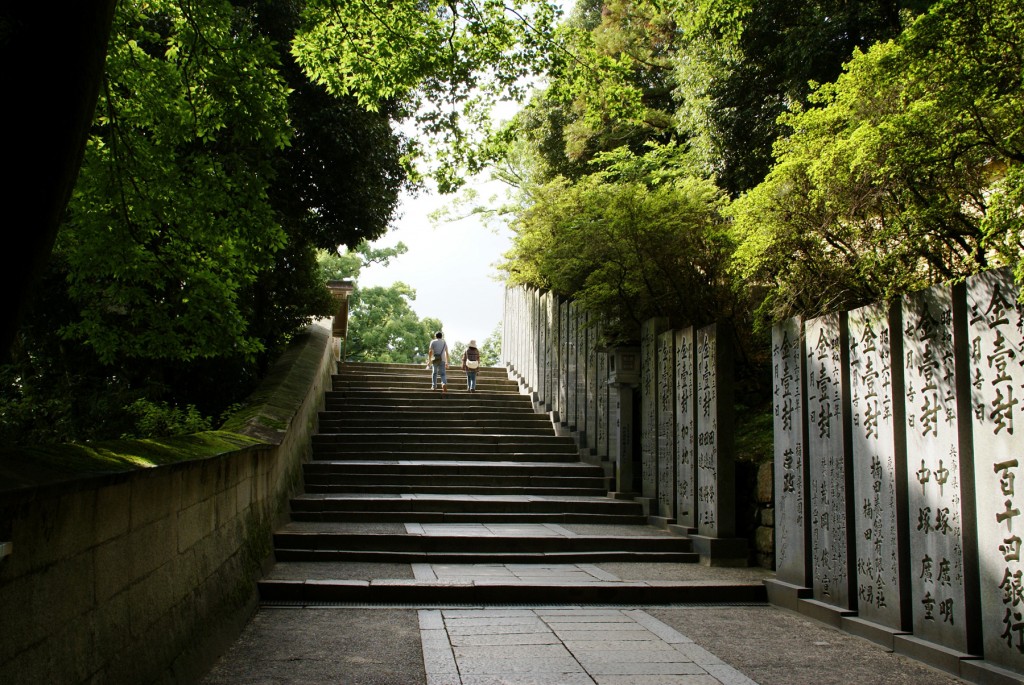 If you’re looking to get away from the city for a few days and want a destination that has a bit of everything, try Takamatsu, in Kagawa prefecture on the island of Shikoku. Located on the coast of the Inland Sea, Takamatsu is a breezy, cosmopolitan port city famous for its top class sanuki udon. It is also home to Japan’s largest garden, Ritsurin Park, which is beautiful to take in any time of year and is the perfect setting for an afternoon stroll. A short train ride away is Kotohira, famous for the shinto shrine known as Kompirasan, which has 785 steps leading up to the main shrine and a further 583 to the inner shrine. Also nice for a day trip are some of the islands in the Inland Sea, such as Shodoshima (with its beautiful natural scenery and Kankakei cable car) and Naoshima, home of the Benesse International cultural village and modern art center.
Travel: One hour and 20 minutes by plane from Haneda airport, several flights daily.
www.city.takamatsu.kagawa.jp/english/sightseeing
www.pref.kagawa.jp
www.town.shodoshima.lg.jp/en
www.naoshima-is.co.jp

A Semi-Tropical Getaway
If the cold weather is really getting you down, escape to Japan’s southernmost islands for some fun in the sun. On Ishigakijima, an island about 430 kilometers south of Okinawa’s mainland, the high temperature rarely dips below 20 degrees Celsius, even in January. There are numerous dive spots around Ishigakijima, as well as locations for snorkeling, kayaking and hiking around Mt. Omoto, Okinawa’s highest peak. Beaches range from sandy to coral, many with spectacular reefs just offshore.  The island also serves as a great jumping off point for exploring the other islands in the Yaeyama chain, which are close enough for day trips. Families will be pleased with the variety of accommodation available on Ishigakijima, ranging from campsites to an all-inclusive Club Med resort.

Dashing Through the Snow Dash through the snow in a nine-dog open sleigh in Hokkaido this winter. The icy winds from Siberia ensure the northernmost island of Japan is covered in a blanket of soft and even snow. If you’re not a skier or boarder, snowshoeing isn’t your only option. Travel around enjoying the unspoiled scenery in a dog sled, a method of transport first used by Ainu natives on the island. Get in enough practice and you could compete in February JFSS Cup International Dogsled Race in Wakkanai, Hokkaido, racing against competitors from around the world.
Travel: An hour and a half by plane from Haneda airport to Sapporo, several flights daily.
www.visit-hokkaido.jp/en

Now you finally have an excuse to wear that yukata. A stay at a ryokan (or Edo period inn) is the best way to experience traditional Japan. Bathe in an onsen, have delicious Japanese meals delivered to the comfort of your room, spend the night on a comfortable futon placed on a tatami floor, and even take part in a tea ceremony. There are 55,000 ryokan located across the country, and even some hidden gems right here in Tokyo. One traditional inn with a modern twist is the Andon Ryokan near Asakusa and Ueno, with its award- winning architectural design. Rates start at just ¥8,190 per night for a two-person room, making this an affordable way to ‘get away’ without leaving Tokyo.
Travel: Located in Tokyo near Minowa and Minamisenju stations.
www.andon.co.jp

Fly Away on BA

Feel the need to get out of Japan? Book your travel on www.ba.com, the newly revamped website of British Airways. At www.ba.com, customers can plan and book trips, manage their bookings, and check in online and print their boarding passes before their flights. The site is easy to navigate and offers customers the opportunity to have complete control over their travel arrangements. It is even available in 11 different languages: English, French, German, Spanish, Italian, Portuguese, Swedish, Polish, Hungarian, Chinese and Japanese. Even better, BA’s lowest available fares are available at www.ba.com.

Approximately 1.8 million customers a month visit www.ba.com to service their booking before they fly, and over 100,000 passengers a day choose to check in online before arriving at the airport. These travelers can’t all be wrong, so why not try out www.ba.com for yourself? You’ll find that preparing for and taking a trip abroad has never been easier.