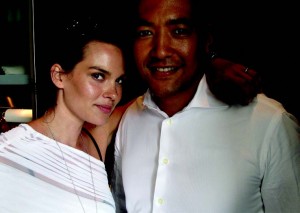 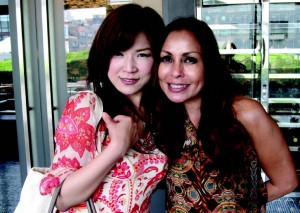 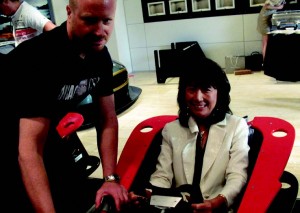 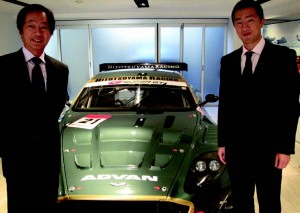 Sho Katayama and his son Yushi 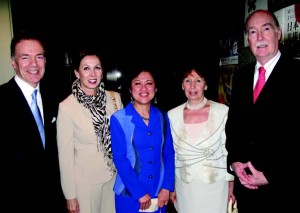 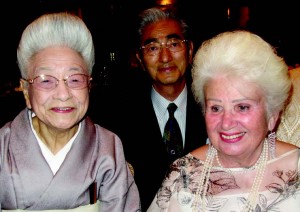 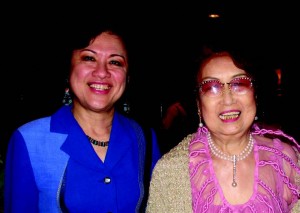 I just read an article in one of the English dailies about the plans of legendary fashion company Brioni, whose suits can cost as much as $47,000, to come out with a shirt soon for the first time. This, like everything Brioni has ever done, will be very special, with a price tag of about $290. Going back quite a few years, I have nothing but the fondest memories of the many great times I spent with the company’s founder, Gaetano Savini, and his wonderful family in Rome, at fashion fairs in Milan and Cologne, Germany, and here in Asia. Savini founded his fashion empire in 1945 and I got to know the marvelous man, who was the epitome of all good things Italian, in the 70s and 80s, when I was modeling, producing fashion shows, writing fashion columns, working as fashion editor for two Japanese men’s fashion magazines, and even designing a line of menswear that was sold in five major department stores here. We became close friends over the years (he was my godfather), and I spent considerable time with him and his family at their beautiful villa in Rome, as well as at several of the city’s most exclusive clubs. It really was ‘la dolce vita.’ The master tailor had to be one of the kindest, nicest, and most generous men I’ve ever had the privilege of knowing. Every time I visited his huge old European-style fashion house on Rome’s Via Barberini, he’d take me down to the cavernous store rooms in the basement and tell me to take what I wanted from the racks of his fashion creations for his international shows. At that time I had no idea of the value of all the things he gave me, but I sure do now. Talk about ‘putting on the ritz.’

Here in Asia I not only modeled in, but also produced Brioni fashion shows for Japan, Hong Kong, the Philippines, and Thailand. Talk about extraordinary experiences. Through Savini I met kings, presidents, sultans, princes, and all kinds of showbiz and sports celebrities.

Well, as we all know, times and people change. Savini passed away a few years ago, and as expected, his family have taken over the business and really done a good job of making sure the name Brioni stays right at the top in the international fashion world. To be truthful, I got a little bit bored with fashion, especially when it came to putting out two menswear collections a year, and moved most of my efforts into running the Lex, doing special events, working on movie promotions, sorting out years of photos and stories for a book or two, getting this column together twice a month, and traveling (hopefully I’ll be doing more of that soon). But I can still use the title of the old song Those Were the Days My Friend when I think about all the wonderful times with Gaetano Savini and his family.

It was a full house at Portuguese Ambassador Joao Pedro Zanatti and his wife Madalena’s reception to celebrate their country’s national day. The weather was beautiful and once guests congratulated the host couple, most moved to the spacious balcony that faces the Ritz Carlton hotel and overlooks a wonderful park with a Japanese garden. The laid back atmosphere gave me the opportunity to see and talk with many longtime friends, as well as meet a lot of interesting Portuguese who live here. These included Ritz Carlton hotel general manager Rico de Blank, who left with his family for Hong Kong a few weeks later. Rico is now CEO of a huge Hong Kong company. More on that when I cover his sayonara party. A few weeks later Joao and Madalena returned to Lisbon for a “great home leave.” He’s now back in Japan, and she’ll be back soon.

Cooking Workshop at the Grand Hyatt

It was a great lunch break, a learning experience, and a culinary delight for the participants at the Grand Hyatt’s Chef’s Table recently. The occasion was the launching of Anri Schrof’s workshop, a culinary adventure called Around the World with Flavor. Anri, as many of you know, is a diminutive, chic, and talented Japanese Farsi who I often take to special events. She has a very international background, and one of her specialties is cooking. The theme that day was ‘viva tapas,’ and the gazpacho and paella were, as all the discriminating guests agreed, the best they ever had. Anri Schroff and the Grand Hyatt’s exceptional executive chef Josef Budde have a magical working relationship, and when they do something together you can be sure it’s going to be first class, original, and very special.

There are plans for more workshops with different themes to introduce the distinctive flavors of the world with table settings to match. Excellent food, a great presentation, dynamic people, and a party made it all a real happening.

Grace Saito is another of our city’s popular and busy ladies, whom everyone knows and respects. Through her charity organization she has sponsored endless classical concerts over the years, with all the proceeds going to many worthwhile causes. Her most recent concert at Sogetsu Kaikan featured a baritone, a tenor, a violinist, a pianist, and a marimba player. Grace worked with the support of the support of the Rotary Club, and proceeds went to helping with their polio eradication project.

Still on the subject of busy people, Shintoyo Company’s top execs Sho Katayama, his wife Mary, and their son Yushi hosted a champagne party at their luxurious Aoyama Aston Martin showroom. The glittering evening was to commemorate the partnership and the beginning of Aston Martin racing in Japan. The DBR9 GTI racing car, as well as the DBG GT Limited, were on display. The showroom was filled with people you could see were at the top, enjoying the wonderful cars, the champagne, and the company, while also showing off their driving skills on one of the simulated racing cars. 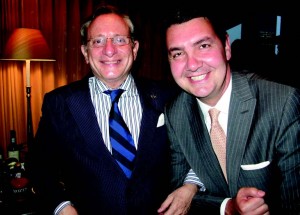 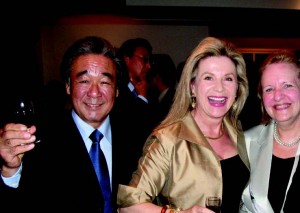 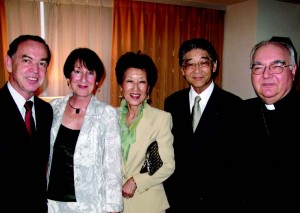 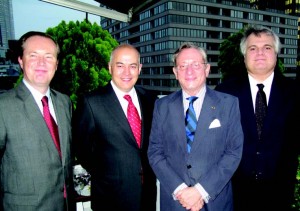 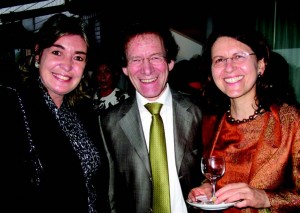 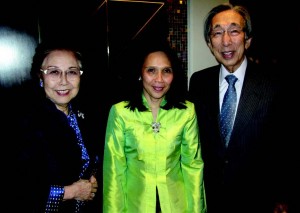 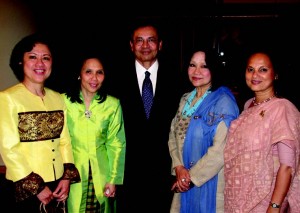 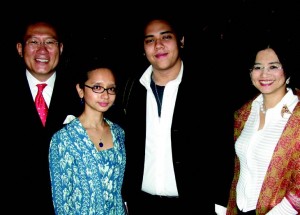 Sayonaras for good people and true friends are never easy, and it was difficult saying goodbye to outgoing Malaysian Ambassador Dato Mohd. Radzi, his wife Datin Jazliza, and their three great kids. After two and a half very successful years here in Japan, the Radzi family have returned to Kuala Lumpur, where Mohd. has taken on a high ranking position in the Ministry of Foreign Affairs. Jazliza, I’m sure, will become very involved in all kinds of worthwhile charity, cultural, and community projects, as she did here. Their son Hijaz, who just graduated from St. Mary’s, will start university classes in New Zealand. Our best wishes to this exceptional family. They’ll certainly be missed by all those fortunate enough to get to know them while there were here.

Missed but Not Forgotten

As I mentioned before, summer stayed busy, and there was just no way I could get to many of the happenings—I’m really sorry I had to miss some. These included the beautiful evening on the Colombian sail training ship Gloria, which was docked in Yokohama for the 150th anniversary of the opening of the port of Yokohama. Out in Mita at Art Tower, the legendary designer Hanae Mori got nine young designers together for an original and colorful exhibition entitled Made by Hand. Min-on Concert Association stays right on top as Japan’s leader in international cultural exchanges. In August they brought the highly acclaimed Young People’s Chorus of New York City to perform in eighteen cities throughout Japan. The award-winning YPC has performed in Carnegie Hall, the White House, ground zero for the 9/11 memorial, Yankee Stadium, and in more than 50 countries around the world.

Congratulations to noted dermatologist Dr. Chin Huai Keong, who just opened her own clinic—the Garden Clinic in Hiroo. Many of you know Dr. Keong through her long association with Dr. Aksenoff’s International Clinic. She speaks both Japanese and English, and is an expert in treating allergies and skin, nail, and hair problems. The clinic is located on Nisseki Dori, close to the Japanese Red Cross Medical Center, and accepts Japanese national health insurance.

People on the Move

Sony Entertainment’s top man Dick Sano recently returned from Cancun, Mexico, where he attended a company meeting and seminar. Dick had nothing but raves for the beauty of Cancun and the hospitality and kindness of the Mexican people. He was super busy once he got back, and had superstar Denzel Washington here for several dynamic promotional events for the film The Taking of Pelham 123. The Hyatt hotel’s executive Robert Hammer was back in town for several days to promote the new Hyatt Regency Shatin in Hong Kong’s new territories. Robert, who’s general manager there, told me about the new Hyatt hotel/tourism school opening near the hotel. The Hyatt Group just never stops with new ideas and new developments. I recently ran into Mona Al Ansari at the National Azabu supermarket. After ten years in Japan, she, her husband (Qatar Ambassador Reyad Al Ansari, who was dean of the Arab Corps), and their children Ali and Maha, have all returned to Doha. We wish them all the best back home. I ran into another super lady as well—Alexa Daerr, the wife of the German ambassador. She and her husband will be leaving Japan later this year. I talked with Alexa a week or so later, and she and her husband were catching the summer festivities on Sado Shima. She said it was a truly wonderful experience. I’ve been there, and I certainly agree that it’s all that and more. Do yourself a favor and get out and see Japan.