Hitoshi Nomura’s artwork reveals an interest, perhaps bordering on obsession, with the physicality and temporality of the world—from the slow collapse of a wet cardboard box or the sublimation of iodine, to the millions of years it takes light to travel from distant galaxies to earthly telescopes. And since any retrospective is essentially about condensing the timeline of an artist’s work, there should be room for plenty of interesting play on the idea of time in the Nomura exhibition Perceptions—Changes in Time and Field. But unfortunately, that’s just not the case.

Nomura is one of those artists whose passion for a subject sometimes seems to outstrip his ability to communicate it. In his early works, such as Room for Listening and Ten-Year Photobook, Nomura went about attempting to record personal experiences. For Ten- Year Photobook, he filmed a decade’s worth of random events from his own life, eventually ‘publishing’ stills from the film in a set of encyclopedia-sized volumes. The work is a library of unlabelled, unconnected, and unplanned photographs that took 10 years to make. Yet as gallery patrons walk by without a glance, one can’t help but wonder if it is a work worth the time spent making it. 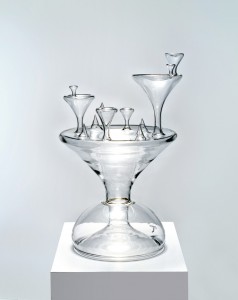 Hailed as a multi-media artist, Nomura works with photography, sound, film, painting, and installations, and produces sculptures incorporating everything from marble, glass, and meteorites to airplane parts and petrified wood. But as impressive as all that sounds, the works seem to jump from interest to interest almost as much as they jump from medium to medium—an effect that is further blurred by the NACT’s inexplicable scattering of some pieces and grouping of others throughout the show. And perhaps hoping to strike a chord with the environmental crowd, there is a fairly unnecessary amount of space (and time) devoted to the solar-powered car that Nomura and a group of art students drove across the United States.

Perhaps what disappoints most about Nomura’s work itself is the number of times it seems to point breathlessly to admittedly fascinating principles of science, asking us simply to be amazed rather than raising the questions that one expects from an artwork. The clearest example of this is Normura’s lengthy focus on the analemma— the figure-eight path one gets when tracking the sun’s position at the same time each day throughout the year. Nomura not only photographs the phenomenon many times, but then goes on to carve it in stone and sculpt it from metal. These are works that seem more about worship than art, more about iconography than iconoclasm.

Closer to the target, however, is a series of fisheye photographs depicting the sun’s daily path across the sky as a single exposedline. Each one-day exposure is aligned with the next day’s, and as the sun’s path begins to curve lower toward the horizon the line of photos also begins to curve, twisting into a convoluted shape and offering a near-glimpse of the continuity of time in the sun’s arc across the hemisphere. 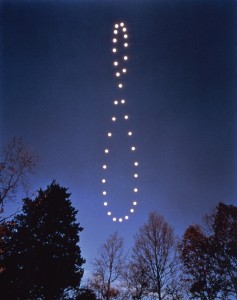 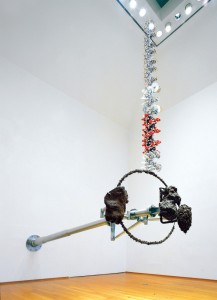 Nomura at his best can be seen in his fossil works, in which he places actual plant fossils next to photographs of distant galaxies.The distances to these galaxies are so great that the light captured in the photo was emitted at roughly the time when the fossil was still alive. It’s a delicious synchronicity that conceptually folds time back on itself, and this mental leap pushes the viewer face to face with both the vastness of the universe and the age of the earth. It’s a conceptual gem a million years in the making. And that’s something I’ve got time for.

Show: Hitoshi Nomura:Perceptions—Changes in Time and Field (to July 27)