The tenacious cliché goes that art and science don’t play nicely―they occupy different realms, deal with entirely different aspects of human existence, and just generally don’t like each other very much.

But talk to scientists and mathematicians and you will frequently find them filled with the kind of breathless wonder for concepts and complexity that inspires artists in an almost identical way. And it was a series of conversations with a mathematician that led to much of Ryoji Ikeda’s current exhibition at the Museum of Contemporary Art Tokyo.

As part of a program at Le Laboratoire in Paris, a space where artists and scientists are encouraged to come together on joint projects, Ikeda and Harvard mathematician Benedict Gross began a conversation on the purity of complex and prime numbers, the impossibility of knowing whether the random is truly random, and, yes, the infinity of points between 0 and 1. While the cross-pollination may have been less concretely productive for the science side of the things, Ikeda went on to incorporate the ideas they had discussed in a number of new works. 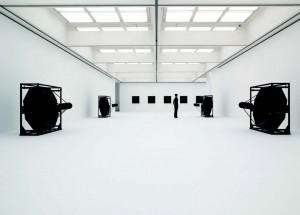 The mathematics also ties in well with another of Ikeda’s abiding interests―the vast oceans of pure data with which we are inundated daily. The fruit of these twin obsessions is a Tokyo show featuring a handful of new works which, like Ikeda’s enormous blizzard-like projections of numbers, appear almost seamless at a distance, making the show something akin to a single two-floor installation that is much less ‘seen’ than experienced.

While the show, titled +/– [the infinite between 0 and 1], is being touted as a retrospective, Ikeda’s work in many ways defies retrospection. Best known as a contemporary composer, Ikeda also puts together large-scale installations, video productions, and sculptures, all of which inform one another, borrow from one another, and subdivide into projects with suitably digital nomenclature such as data.matrix and data.film.

Fittingly binary, +/– is an exhibition in blacks and whites, with little color to be found. The upper floor is a darkened cave of flashing, spinning, and accumulating computer displays of data. A video work titled data.matrix [nº1-10] projects ten separate images of what could be by turning the locations of stars, folding proteins, or points for 3D modeling, while data.tron [3 SXGA+ version] turns a two-story wall into a crescendo of blowing numbers so vast and numerous that they threaten to engulf the viewer.

But moving downstairs, the polarity changes, and the sensory roles reverse. The room is now blindingly white from floor to ceiling, and the 10 video displays have been replaced by metal panels etched with numbers so tiny that they can barely be seen. As a result, the only real sensory input comes from five huge speakers which fill the room with a thrumming and gradually changing electronic soundscape that alters constantly as you pass through it―even the tiniest of head movements creating new patterns of sound.

This is Ikeda at his best. With nothing much to see, many visitors will walk into the room and wander back out again confused. But those that stay will soon forget the lack of visuals, as the process of moving through a space of invisible, but almost tangible sound waves goes from vaguely embarrassing to fascinating, ultimately becoming meditative. 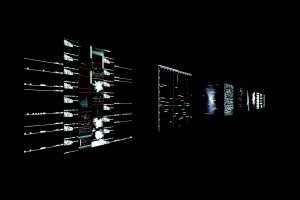