Life Up is a true winter warmer,

I had the map in front of me and was still wondering how she had got it quite so wrong. We’ve walked down the street many times, past the bars under the rail tracks to the clubs of Daikanyama. So that we were halfway to Omotesando before we noticed something was amiss sim­ply adds weight to the quietly spoken suspicion that women with maps are like marmite on lobster. Fortunately I wasn’t cooking that night. Instead, we had found ourselves in a small fondue restaurant to warm us up on a chilly winter evening.

This is a dish that should come with a complimentary wine-box, the first taste of foreign countries to one just com­ing out of rationing. At least that’s always my image of fon­due: the fulcrum to suburban house parties in the seventies, Fleetwood Mac on the record player, and moustaches on the men. 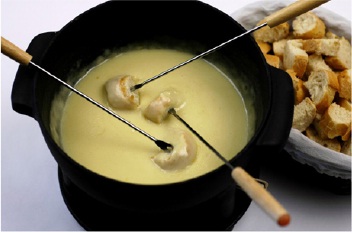 We had a table for ten under the arcade where Wham! gently strummed in the background as we began talking until the drinks arrived. We ordered our starters: roast duck, tofu salad, beef tataki, and shrimp and avocado wraps. All typical izakaya fare, so all exactly as you imagine them, except the duck, which tasted better than it felt; what a pity they over­cooked it as the sweet flavor was actually quite impressive. Too-thin bruschetta further compounded our hunger, forcing further pressure on the fondue to deliver.

The menu certainly looked promising with the range of melted cheeses on offer. This was coupled with an extensive vegetarian menu, if you are that way inclined, with photos aiding those who understand neither the printed English nor Japanese. The standard fondue is accompanied by a quote from a Swiss diner approximating it to the taste of home, but as one person’s home-cooking is another’s dog-food, naturally I felt obliged to sample. If her house is made of Emmental and Gruyere heady with wisps of wine, she was right. And I want to move in. But I hope her house is bigger than the pots the cheese came in: the restaurant claims suitability for three, but only if one is not eating. Other variations lean towards black, blue, and red cheese sauces (with the aid of tomatoes) and can be ordered with bread or shrimp. Being simple folk, we stuck with the bread, but as my co-diner, whom I’ll call “Francophone”, vocally enlightened us to, it ought not run out before the cheese. Which it did. He’s quite sensitive about these things, it seems.

Despite the decanter of house red waddling between our beers, alas I missed the opportunity to try the Gorgonzola fondue with it. This, I fantasized, closes in on the port and stilton I would be having were I still in England and gives rea­son enough to return to Life Up. There is also the top-grade Wagyu beef to consider and the range of sukiyaki hot pots for Lancastrians lost in Tokyo. I’m going to have to say it: Life Up is a true winter warmer, like gloves for the stomach. I never expected (nor tried) to find fondue in Tokyo, but now that I know it’s here, I dare say I’ll be back.

Best table: All are cozy but those on the left and at the back are even more so. Prices: A reasonable ¥5,000 per head. Location: walking from Shibuya station, follow the Tokyu line towards Daikanyama; it’s on your right after about ten minutes.