For this, our movie issue, and with the launch of the new double spread movie pages, let’s take a look at the influences Japan has had on the world cinema and at notable films related to Japan. With the following blockbuster facts, there is something interesting for even the most ‘back seat’ of movie fans.

BEFORE ‘THE BUBBLE’
For the greater part of the twentieth century Japan’s major movie studios churned out an assembly line of military- and ‘life on the home-front’-type productions, emoting on predicable post-war feelings of nationalism and rebuilding family values. Before then Japanese films were little more than adaptations of traditional stage or kabuki plays.

In 1951 the Toho Company released Godzilla, the first blockbuster monster movie of its kind starting a trend that has continued to this day.

During the 1980s Japanese money was invested into Hollywood productions, and films made here in Japan were funded by foreign money, kick starting an interest in the cinema and rehauling the movie making industry. Anime received its first overseas attention and Akira Kurosawa directed his last great epic, Ran. The film was the most expensive Japanese film ever produced of its day and won two awards from the British Academy of Film and Television Arts. 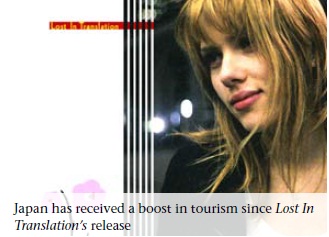 DIRECTORS OF INFLUENCE
The most influential Japanese director in international cinema is perhaps Kurosawa Akira, who directed the first Japanese movie to ever win an international award. Rashomon took first prize at the Venice Film Festival in 1951 and three years later he made the epic Seven Samurai (in Japanese: Shichinin no Samurai). Today the film ranks as one of the greatest films ever made, and it is said to have inspired the classic Western film The Magnificent Seven.

In 1961 Kurosawa went on to make The Shadow Warrior, which was later made into the Clint Eastwood Western A Fistful of Dollars. Perhaps this was the start of Clint Eastwood’s interest in Japan-based movies, as later in his career he returned the favor by bringing a World War II battle to the forefront of modern day cinemas.

With the death of Kurosawa in 1999, Kitano Takeshi stepped up as the leading Japanese director on the world stage. Better known to us here in Japan as a risqué TV comedian and presenter, overseas his movies have continued to pick up prizes for both his directing and acting skills.

In 2000 Takeshi starred as a sadistic high school teacher of the same name in the controversial Japanese blockbuster Battle Royale — a movie where one class of delinquent teenagers is sent to a deserted island every year to kill each other.

Another director making waves overseas and breaking box-office records is the best-known maker of animated movies, Hayao Miyazaki. His recent 2001 release Spirited Away won him an Oscar, and became the first animated film to win an Academy Award.

ANIME
Miyazaki’s thought-provoking movies have made him a household name in Japan since the 1960s. Although anime has only recently received foreign attention, domestically it has been a box-office revenue generator for decades.

Astro Boy was the first animated television program in Japan, but it was Akira, Otomo Katsuhiro’s futuristic movie about a group of teenage rebels roaming the streets of a post-apocalyptic Tokyo, that first made it to the big screen. It was also the first Japanese animated movie to have an impact abroad. (Of note, the music video for Michael Jackson and Janet Jackson’s 1995 hit Scream, featured clips from Akira and other Japanese anime.)

Miyazaki is also co-founder of Studio Ghibli, an animation and production company often called ‘a Japanese Disney’. Through Studio Ghibli, Miyazaki`s fans have been treated to classic stories of fantasy, including mustsees such as Laputa, Kiki`s Delivery Service, My Neighbor Totoro and more. (Not surprising, the Disney Corporation itself that has secured the majority of Ghilbi’s international distribution rights.) The studio has become so popular that the Ghibli Museum was opened in 2001.

MODERN AND WESTERN INTERFERENCE
In recent years Japanese anime has even found its way to Hollywood, the most notable film being Quentin Tarantino’s 2003 blockbuster Kill Bill.

Kill Bill was adapted from a 1973 Japanese ‘revenge film’ called Lady Snowblood. Influenced strongly by Japanese samurai films and martial arts movies, Tarantino’s film brought Japanese culture, both new and old, into Western cinemas at a time when the box office was riding on the success of all things Japanese.

Apart from Tarantino himself, the film is made of an entirely Japanese cast, with dialogue in English.

In the same year Lost In Translation catapulted modern-day Tokyo onto international screens as audiences pondered the on-screen relationship between Bill Murray and Scarlet Johansson.

Incidentally Japan has received a boost in tourism since the film’s release, with sightseers flying in to visit The Park Hyatt or to experience a karaoke experience as crazy as the one portrayed in the movie.

Johansson herself won the Upstream Prize for Best Actress at the Venice Film Festival for her performance, and can still be seen on Japanese TV today in commercials for Dr. Rainer coffee.

Also in 2003, The Last Samurai provided foreign audiences with insight into Japan’s rich history and, for perhaps the first time ever, this Western interpretation of Japan won the respect of Japanese critics. The film did, however, have an largely American production crew, with filming done in New Zealand with actual shots of Mount Fuji superimposed.

The Last Samurai was nominated for four Academy Awards including one for Ken Watanabe as Best Supporting Actor. In this, his first English-speaking role, Watanabe found himself hailed as a new international pin-up.

Two years later Watanabe appeared in another Western adaptation of Japan’s past, Memoirs of a Geisha. Despite the popularity of the book from which the film was based and the hype prior to release, the film was not well received by critics and had little impact at the box office.

Memoirs of a Geisha was not screened in China after officials banned it, fearing it would rouse anti-Japan sentiment and stir up ill feelings of Japan’s wartime actions.

WAR FILMS
Japan’s role in the great wars of the twentieth century has been the subject of numerous revisionist film examinations, providing insight from ‘the other side’ as an alternative to the usual American bias.

In 2006 Clint Eastwood released two films just two months apart from each other, depicting the same World War battle from two opposing viewpoints. Flags of Our Fathers follows the tale of three surviving American flagraisers following their return from the Pacific, while Letters From Iwo Jima—again starring Ken Watanabe—shows the Japanese perspective of the battle. Both films combined collected an annual gross of $135 million.

Letters From Iwo Jima is filmed entirely in Japanese  and although reception of the film’s historical accuracy was mixed here in  Japan, it was named the Best Film in a Foreign Language at the 2006 Golden Globe awards.

Prior to Eastwood’s films, 2001’s To End All Wars was released, starring Keifer Sutherland in a storyline similar to the classic Bridge Over The River Kwai. Nowadays the Western/Christian overtones of forgiveness, apparent throughout the movie, are not received very well, signifying a need for less biased portrayals of Japanese in the theaters.

ACTORS AND ACTRESSES
As yet, few Japanese homegrown actors or actresses have exerted any influence on movies made overseas.

Most noticeable would be the aforementioned bilingual Ken Watanabe. Some interest was sparked however, in actress Chiaki Kuriyama, Kill Bill’s 17-year-old, chain ball welding schoolgirl psycho although, until she can speak English, fans may have to wait for any future appearances of a more wordy nature.

HORROR
Kuriyama, did however, appear as Tatako Chigusa, Girl Number 13, in the sadistic horror Battle Royale, until being shot in the back by her classmate.

The excessively violent film was labeled ‘crude and tasteless’ by members of the Japanese parliament, but is still listed as one of the top ten grossing movies of all time in Japan. Domestically alone, it brought in ¥3.11 billion.

Due to cultural sensitivities, the film still does not have an official distributor in the US, although it can be bought in the UK.

‘J-Horror’ has found a market overseas and a recent wave of former Japanese folk-tale spooks have found their way into popular culture abroad.

The 1998 Ringu (The Ring) was voted the most frightening horror movie in Japan and is still the highest grossing horror film in Japan to date. The story of a cursed videotape that brings death exactly one week later to anyone who watches it became an international success after being remade in Korea in 1999 and in the US in 2002.

A whole host of other horror movies have been made in the US, including The Grudge and Dark Water although if and when this trend will spread to more main stream movies, remains yet to be seen.

FUTURE
As we move further in the twenty-first century, the future seems bright for Japanese movies as overseas influences continue to cast a unique light on interpretations of the culture here and Japanese influences are integrated into internationally produced production abroad.

Movie Facts:
Miyazaki`s 2001 hit Spirited Away is the highest grossing film of all time in Japan.

Tarantino refers to Tokyo as his second home and is reported as saying “Visiting Japan is the only time I leave my small county in LA.”

The crew of Lost In Translation faced threat of arrest when filming in both the Japanese subway and at the Hachiko crossing.

Tom Cruise spent almost two years preparing for his role in The Last Samurai, learning how to speak Japanese and sword fighting.

2006 saw a new trend for movies premiering in Japan: Spiderman 3, The Fast and The Furious: Tokyo Drift, and Harry Potter and the Order of the Phoenix were just three movies where directors opted for Tokyo to make their headlining debuts.

The Japanese government tried to ban Battle Royale but feared that to do so would inadvertently give the film more publicity.

Unless coming from the UK the ¥1,800 ticket charge may come as something as a shock to movie fans new to Japan. Most cinemas do, however, have a ¥1000 ticket charge on Ladies’ Day (Wednesdays) and on Movie Day (the first day of the month).