Four Unique Perspectives on Leaving the Land of the Rising Sun

“I was so naive…” This was not a statement made by one of my interviewees recounting their experiences in Japan. Rather, it is what I mutter to myself as I write now. When I began to talk to those who have left or are leaving their lives in Japan, I thought that I could compile their accounts and draw out some common thread of thought, a universal truth that I could pass on through this article. Boy, was I mistaken. The only truth that I have found is this: people’s experiences leaving a culture such as Japan’s are just as unique as the people themselves are. Though it may sound like I’m stating the obvious here, just because two people come to the same country from another, it does not mean in any way that they will leave with the same feelings or conclusions. However, there is one thing that I can defi nitely say. The enthusiasm with which all disclosed their thoughts on this topic tells what an impact living in Japan has had on each and every one of their lives.

Greg is a university student in his early twenties now studying in Canada. He spent two years as a high school student in Tokyo. He plans to return back to Japan soon after finishing his degree to pursue a career in business.

What were your reasons for coming to Japan?
I went to Japan because I saw it as an opportunity to grow up outside of Canada, while learning a crazy new language and zeroing in on a possible career path. So a little bit of career, adventure and boredom along with the high school system here were my root interests along with Japan.

Were there any difficulties that you faced upon leaving Japan and returning to Canada?
The readjustment stage when I got back to my Canadian high school was tough. I had few people that I could relate to at that point, since I knew I had changed and everyone else had pretty much stayed the same. Homelife was tough too, since my parents could not really understand what I had been through, and there were some pretty big issues that needed to be addressed.

So readjusting to family life and a different school culture were the main issues you faced. Anything else?
Well, things seem much more mundane in Canada and you notice a lot of things that Canadians do that you wish they did or didn’t do. Like have vending machines that sell hot canned coffee or not charging so much tax. Also on an interpersonal level, it’s hard not to relate everything to your experience in Japan, and since most people don’t really care to hear about your time away every other sentence, I can see how it was so hard for me to readjust into the society I had left only a year prior.

Did your time in Japan have an impact on your outlook for the future?
It not only changed my perspective, it created one. I know that I enjoy communicating with Japanese people and living in Tokyo while I’m young. I know because I have lived there that I will certainly pursue a career in Tokyo post-graduation, mostly because I know that there are tremendous opportunities outside of the English teaching realm for a North American who can speak fluent Japanese. 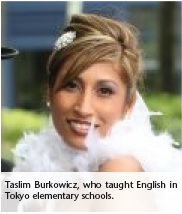 Taslim lived in Tokyo for three and a half years and was an English teacher at an elementary school. She returned to her hometown of Vancouver Canada last year where she discovered the love of her life, an old high school friend whom she recently married.

What were your reasons for coming to Japan?
I chose Japan because though it was culturally totally different it was technologically advanced. I loved that I would have to learn a new language, I loved the quaint noodle houses, but I also loved the fashion forward promises of Shibuya, and the night life of Roppongi. I knew Japan was searching for English teachers and that I would be compensated well, and I also knew I could travel all over Asia because of the prime location. I chose Japan over Korea, because I thought Tokyo would be livelier and more “advanced” than Seoul. I would say “adventure” drew me in.

What fears did you have about leaving Japan and returning home?
I was afraid that if I moved back I would miss my friends (in Japan), and my job as an elementary school teacher which granted me paid holidays and in turn allowed me to travel. I knew I would miss diving all over Asia.

Did you experience what they call “reverse culture shock” upon returning home?
Culture shock? Most definitely! I started finding contrasts in everything, from fashion to food. I still find myself speaking Japanese when I can to anyone who will listen. People think the ways of Japan are absurd when they see capsule hotel rooms or French maid cyber cafes, I think, no you just don’t get it. And in my mind I order takoyaki on a street corner in knee high boots over jeans in Shibuya.

How have you changed as a person, what did you gain from your experiences here?
Well I would definitely say that living in a different culture was beneficial to me. Though in the end I see us as being more universally alike as humanity than different, my life could never be the same after my Japanese teachers flew in for my wedding and sang “Little Dragonfly” for me in a chorused line.

The Actor
Curtis* (This is not his real name upon request of the
interviewee.) 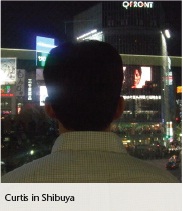 Curtis, in his early thirties, has been working as an actor in Tokyo for five years. He plans to move back to the North American West Coast to live on an island, continue acting and complete his novel chronicling his experiences in Japan.

What were your reasons for coming to Japan?
I met people in Toronto, when I was doing a little bit of acting there, that were traveling back and forth, mostly models for two or three months at a time who made a lot of money. Foreigners were in demand because there was a relatively small pool of foreigners in that industry. So I thought I would try it in Tokyo, with acting that is!

What is the job market like for actors in Japan?
When I got here and started doing it in Tokyo, I realized that the industry was very much different. There is no union protection working in the industry and production standards aren’t the same. Plus, what they call acting here is not quite what we call acting in North America, because when you say lines they just get dubbed over on television. You’re doing it all in English but being dubbed over so it’s not your voice, just your actions on television. It was really disappointing. I think for actors, what they do on set, that’s their acting. They’re still giving it their all. So if you change anything, it is taking away from what they do. And say for example, you show a copy of that video to an agent, it’s not going to be taken very seriously if it’s dubbed over with somebody else’s voice.

What fears did you have about leaving Japan and returning home?
There is such a thing as reverse culture shock and when I go home now in some ways, maybe I don’t understand how much I’ve changed until I’m living there but there are definitely things that I notice when I visit for a short time. I think I get the sense that my family see me differently and react to me differently. I don’t know if I really am different in some way that I’m not noticing, so maybe they can’t relate to a lot of what I talk about and to my experiences. Maybe that’s a large part of it. So they react different. Sometimes they are awkward, or there is a ‘smirky’ silence. I feel like a stranger sometimes.

Will you miss anything about living in Japan?
Being in Tokyo, you never tire of discovering new things. You’re always discovering something new. No matter how long you live here you’re always going to find something new, a new experience. Being here in Tokyo for five years, I have only really scratched the surface with the cultural experiences and cosmopolitan experiences to be had. 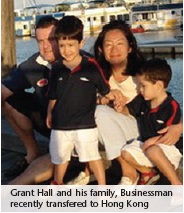 Grant is the Regional Head of Macro Flow, Sales and Trading at ABN Amro in Singapore.  In 1994, he was working in his home country, the UK, as a bond trader when he was given three days notice to go to Japan for a one month business trip. He ended up staying nine years.

How did a one month business trip turn into a nine-year stay?
I came to Tokyo in Feb ’94 for a short term business trip. Upon arriving and working here I very quickly realized that I was going to have to fill a position here, so I hired myself for it. I was appointed a two year contract and ended up staying for nine years! When my contract would end, I would just ask my company to renew it again.

Why did you leave Japan?
I left in June 2003 to continue my career with HSBC in Hong Kong. I had no choice. Basically they decided to put all traders over there. Reluctantly I left; my fear was the unknown of going to an new country. I love the environment in Japan and felt safe and secure, very comfortable there. My wife is Japanese. Hong Kong is a more manic business island where I think there is less culture. Japan had a fine balance of work and play. There is the ability to get in the car and drive to the mountains or get on the train and go skiing.

What did you gain from your time in Japan professionally and personally?
I really enjoyed working with Japanese people, to think before demanding or asking things. I learned not to shout and not to be aggressive. I came from a competitive environment in London. The banking world can be such an environment. In Japan it teaches you almost an orderly way of doing things and you get a job done in a proper way, i.e. politely suggesting as opposed to “you must do this”.

What do you miss about your life in Japan?
I was sad to leave Japan but my sadness was curtailed by knowing that I could always go back and visit family and friends. Most people that go to Japan as professionals have to accept that they won’t be there forever, but leave with a sense of sadness. Most of the people I know, if they don’t leave after two years, they’re there for longer than five. When I see my friends in Singapore who have lived in Japan, we will say things like “kanpai” or “hisashiburi”, which shows how much we enjoyed it there. That’s something that I’ve taken away with me. I have twin five-year-old boys and I’m very keen on them learning Japanese. I would like to work in Japan again one day. If I do leave Hong Kong, that is definitely one destination that would be an option.

So here as I finish, I now wonder, “What unique story will I have to tell when I leave?” Only time will tell, but in the meantime I will rest assured that the experience is mine only, special, and like no other.