Values the Past and Embraces the Future

There are some two thousand privileged folk in Tokyo who hold a key to escape, a loophole from the often exhausting and hectic pace of the city. They are the members of the City Club of Tokyo, a luxurious respite for the established society elite.

Reclining on a leather couch in front of a crackling one hundred year-old fireplace imported from England; net-surfing with a free wireless connection on a laptop; playing a stimulating game of backgammon in the library; surrounded by bookcases of leather bound books and a hint of soothing background music; finishing off lunch with a Darjeeling flavored Crème Brulee with Maple Ice Cream and Panier amidst the elegant European décor of the Continental dining room. These are the sort of moments offered by the City Club of Tokyo, located on the ground floor of the Canadian Embassy in Akasaka, right in the centre of the hustle and bustle of it all. Who could have imagined such a typical Tokyo solace was available in a metropolis commonly known to serve up boisterous salary men hopped up on shochu and grilled chicken gizzards, raucous street concerts and unrelenting train squeaks and squeals?

The club has a sixteen year old history that begins with its opening in July of 1991 by the Imperial Highnesses Prince and Princess of Mikasa, a royal couple known to have an enthusiasm for international arts and culture. It is clear that their refined influence is carried across the club’s various events and exhibitions. Presently members and guests can contemplate the glass sculptures of abstract artist Pablo Posada Pernikoff, or ignite an appreciation for the art and philosophy of incense by taking part in a Kodo class with a traditional ceremony. They may also anticipate the arrival of renowned Australian chef Michael Lambie whose cuisine will be showcased at the club towards the end of the month. The hubbub surrounding his visit is enough to have been picked up recently by Mainichi Daily News. The City Club also holds a monthly Networking Evening where members can appreciate live music, wine and champagne tasting and an opportunity to chat. 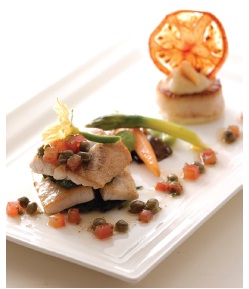 Member exclusive clubs such as these are sometimes considered conservative and an extension of such exclusionary alliances as the legendary “old boys network”. The City Club of Tokyo is without a doubt, conservative in its lavish setting and traditional high level of service. However, in many respects it is surprisingly avant-garde. Take its Ladies’ Luncheon Series, the next to be held later this month featuring special guest Geralyn Lucas; author, Emmy Award nominee and a breast cancer survivor. The club will host a charity event to follow, The Pink Ribbon Gala.

Moreover, while the club’s featured European and Japanese menus offer an extensive list of traditional dishes, others are scrumptiously progressive. “Cardamon and Anise Braised Kurobuta Pork Belly and curried baby carrots and sauterne emulsion” is the sort of dish that would be expected from the trendiest fusion joint in New York. General Manager, John Isherwood, explains that while such modern aspects of the club might be surprising for some: “A club is really about the time we’re in. We need to be able to give members what they want.” And clearly, it’s high end, of-the-moment, dining experiences that they seek. Four European style dining rooms, three traditional Japanese style rooms, a sushi bar and a Teppenyaki restaurant space are also a testament to the club’s devotion to quality cuisine.

The City Club of Tokyo is also a social community where life experiences and personal histories are shared amongst members. Though forward-looking in many ways, the club recognizes the values the past has to offer. Last month, it held a Seniors’ Luncheon hosted by Mr. Shima, who shared his experience of being one of the very first Japanese after the War to travel overseas as part of a YMCA friendship visit to Australia. (With no commercial flights leaving Japan in 1951, he and his friends had to be flown out of an Army Airforce base.)

Mr. Isherwood is quick to note that the club is also very much: “A place that fosters international relationships and understanding in the realms of culture, entertainment and business.” This is the philosophy upon which the club was built, and continues to be upheld today. Ultimately, The City Club of Tokyo is a sanctuary, a quiet place for meeting, dining, entertaining, and relaxing for those elite who desire escape from the fast paced urban grind. And though it is as traditional as it is modern and as business as it is art, it might be simplest to reckon that…it is little bit of everything good.

All information regarding The City Club of Tokyo at the Canadian Embassy in Akasaka can be found at its website: www.cityclub.co.jp.