A Labor of Love

It has been a long, circuitous and highly eventful route to the top for maverick restauranteur Yog Kapoor, founder and proprietor of the pioneering Tokyo Indian restaurant franchise Samrat. A now-longtime fixture in Tokyo’s gastronomic scene, the congenial Peshawar-born entrepreneur and former Bollywood film director first set foot in the city as an assistant film director, assigned to a film project about an Indian doctor in post-A Bomb Hiroshima who falls in love with a woman suffering from radiation poisoning (the 1966 Aman, directed by Mohan Kumar). His two-month stint in Japan saw him fall in love with a Japanese woman, who he married soon afterwards in Bombay. After two years of life in the Indian entertainment capital’s posh Bandra Pali Hill enclave, the couple returned to Tokyo, establishing themselves in the garment import business before Kapoor launched the first Samrat restaurant in Shibuya in 1980, which he followed with the then-revolutionary concept of the low-cost push-button curry house, which he pioneered in 2000.

Thirty-seven years in Japan and over a quarter of a century in the restaurant business have done nothing to dull his enthusiasm for his old métier. “Movies are my life, and this is my movie screen,” exclaims Kapoor, gesturing to the lush, Rajasthani-inspired décor of his flagship Shinjuku restaurant and the live musicians animating the place. “However, even when I was a movie director, I dreamed of opening a restaurant.” Considering his background, it is indeed fitting that his latest and grandest statement has been to merge his love of song and dance with his love of fine food in the form of his new “Music and Dining” performance series, featuring Wednesday through Saturday world music and dance shows at his Shinjuku restaurant, which he inaugurated two years ago. “Dining and music—this is my great act,” declares Kapoor, beaming from ear to ear.

After nearly three decades, Kapoor’s Samrat (“emperor” in Hindi) franchise now counts fifteen restaurant s in the Tokyo area, operating under the aegis of Kapoor’s import-export fi rm, Sunita Trading Co., Ltd. (named after his wife Atsuko’s Indian name) which, among other things, provides his restaurants with a steady supply of Indian spices and other ingredients. The Samrat franchise expanded quickly during its fi rst decade, with five restaurants by the end of the 1980s, offering high-quality Indian curry at affordable prices. The timing of the chain’s expansion, Kapoor explains, could hardly have been more fortuitous, as the bursting of the Bubble Economy created a surge in demand for inexpensive eats, and the popularity of his mini curry house in Shibuya proved to be nothing short of astonishing. “Now there are thousands of curry houses in Japan, even in the villages,” says Kapoor. “We started that.” A decade later, the ever-restless restauranteur saw the need for a new challenge, and he settled on the idea of mixing world music with fine dining. Selling people on the idea, however, proved to be a challenge at first. “I called many Japanese musicians and they told me it wouldn’t work.” Nevertheless, Kapoor’s vision began to take shape upon crossing paths with a vocalist known as Diva Noriko, whose dynamic Latin jazz quartet he contracted for a year’s run at his restaurant in Hiroo. While the marriage of Masala and Mambo might seem odd to some, the feedback it has generated, Kapoor insists, has been uniformly positive, and two years after its launch, the now Shinjuku-based performance series features an extensive array of superb performers, including bellydance, contemporary and classical Indian music, Arabian and Romany (Gypsy) music, Argentinean tango, marimba music and, of course, Diva Noriko’s Latin band. Since the outset, Kapoor has insisted on keeping his music nights accessible and affordable. “We have expensive musicians here, but we have no music charge,” he emphasizes. “I want lots of people to come. If you charge too much, people don’t come.” 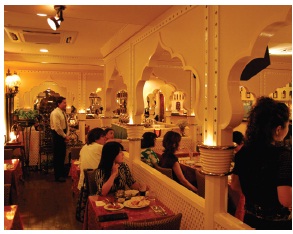 Ultimately, though, Samrat is about the food, and on that score Kapoor’s outfit continues to set the standard, offering its own brand of rich, mouth-watering Mughlai-style north Indian cuisine at affordable prices in lush, colorful surroundings. When it comes to quality ingredients, Kapoor is fastidious. “We buy our produce fresh at the market every day,” he says proudly. His formula clearly works, as Samrat continues to be Tokyo’s most recognized name in the Indian food business, with restaurants throughout the city attracting a cosmopolitan clientele drawn from all quarters, most notably from the city’s increasingly visible Indian community. The rapid expansion of this community, Kapoor notes, has generated considerable interest in Indian culture, and a much more nuanced view of his native country among the Japanese. “When I fi rst came, all people knew about India was curry and elephants. But ever since the [Indian] IT people started coming, people have come to know about [our culture].” With a long and eventful career under his belt, Tokyo’s crown prince of curry shows no signs of slowing down. “A lot of people ask me when I am going to retire,” he segues, with a chuckle. “I want to die on duty. I don’t think of this as a job. This is my hobby. I love it!” With his music and dining project now in full swing, Kapoor’s eventful career has indeed come full circle, and given the buzz that his latest project has thus far generated, coupled with his restaurants’ longstanding reputation for superb food, the man’s longstanding labor of love promises decades more joie de vivre still to come.