Chia and her two colleagues were laid on the floor. It was 1997 in the midst of a sweltering summer and their new international pre-school and kindergarten had been open since March. In the summer heat they lay, trying to stay cool whilst waiting for the students to arrive that day. Since the grand opening two months prior however, not one student had entered the school. The night before, Chia’s business partner had dreamt that someone would walk through the school gates, and sure enough, on that hot day, their first and long-awaited knock on the door was heard.

Their first student enrolled and in the following week came another. The week after another student enrolled and by the time the Christmas party came around there were over 20 students to enjoy the festivities. That was ten years ago and so continues the success of the PAL International Pre-School and Kindergarten under the guidance of Chia Ura, the school’s owner. “When I first started, I only took care of the business but now I understand my vocation in life is to be in an educational environment.” It is this successful agglomeration of typically clashing economics and educational policies that Chia attributes to PAL’s lasting duration—often conflicting policies can attribute to a number of schools opening their doors and soon having to close them.

Celebrating its 10th anniversary, PAL International School is one of the oldest and longest running English-speaking preschools in Tokyo. Admittedly these days, another international school set in the most international of locations, Minato-ku, may not, at first, seem like such a novel idea. However, ten years ago things were very different. Today there are up to 15 schools to compete with; in 1997 only two other schools were open.

Chia and her two partner teachers had recognized that foreign parents did indeed want their kids to learn about Japan’s culture and traditions—without having to compromise on vital English based curriculums. Children who learn at PAL become so familiar with songs, greetings and phrases important to Japanese society that after graduation they are able to adapt to a either wholly Japanese elementary school or that of an international setting. Remarkably, students often become translators for parents carrying out daily chores. One little boy was even able to answer a policeman’s questions after losing his way home. PAL’s founders radically answered this need for an international education without ignoring the Japanese backdrop a decade ago, and this is what keeps PAL a unique choice for kids starting out in academia even now.

Advertising for enrollments was, for a long time, totally reliant on word-of-mouth recommendations. The transient nature of the foreign community and good reputation has kept a surplus of parents wishing to enroll their children at the school and even now, with waiting list is so full that students are being turned away, Chia refuses to give in to demands for a bigger premises. “This is a small school and we want to keep it this way.”

Understanding that each child has unique approach to learning and a unique cultural heritage, Chia and her team have “always wanted to focus on the individual needs of each student. Most students come from European parents where English is not their first language and with many students of mixed race, it is important not to have more than ten students in each class.” Safety also remains an important factor and Chia confesses that the school did have to move to a bigger building two years ago; a three storey house that allows two classes for each grade—eight classes in total. The house which has been refurnished with a cozy ground floor for younger babies, a second floor “fun floor” and the more serious study rooms on the third and final level which compliments PAL’s continuing dedication to putting the student needs above that of generating revenue.

So, has ten years at PAL really been an uninterrupted happy story of success? “Yes, but business is different to ten years ago” says Chia. She explains that PAL was the first school in the area to have a website and now with pages that require monthly updates there is a need to hire someone to deal specifically with this issue alone. Chia adds, “these days there are more teachers around but fewer are qualified and they are more expensive. The happiness and creativity of our teachers is important but a lot of our revenue goes to paying for their services, which is a big problem.” 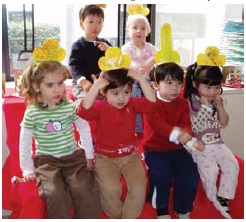 Still, after admitting that being around children everyday keeps her feeling younger than the “grandmother-figure” role she fills, and that she is still learning from students as equally as she teaches them, Chia and PAL International School, will no doubt continue to overcome the battle of economics and education.

PAL International School near Arisugawa Park in Hiroo is always open for a free trial lesson. Please contact the school directly at www.pal-school.com or on 03-5770-8166 for more details.