French, Italian and Spanish are just some of the European flavors readily available for enjoyment in Japan. In this case, these varieties have more to do with pleasing the ears than the palate. Whether it is the Italian accordion, flamenco guitar, or jazzed up French lyrics that one might be craving, there are master music chefs right here in Tokyo, consistently serving up melodies to gratify.

Bruno Dimino is honored. The guitarist and vocalist continues to meet and collaborate with some of the “greatest jazz musicians” in the world, including those from America, Canada, Italy and Japan. His professional career has been prolific. In France and Europe alone he has played over 300 shows. Upon arriving in Tokyo in 2002, Bruno began immediately to perform in a French “Chanson pop” trio that has taken him all over the country and led to appearances on NHK.

Chanson is essentially any song sung with French lyrics, and Dimino’s unique form is the fusion of jazz and Latin music with French vocals. He describes the sound as “a feeling very close to smooth jazz and bossa nova…relaxing and fun”.

To further augment the international music scene in Tokyo, Dimino started up an event planning company with his wife two years ago. Rainbow Office books musicians to perform for various events and occasions around the country.

Bruno Dimino’s collaborative jazz performances can be experienced at the French Kitchen Bar in the Grand Hyatt Tokyo in Roppongi, Monday through Thursday from 7pm–9pm. www.tokyo.grand.hyatt.com/hyatt/hotels/entertainment/lounges/index.jsp.

A side of accordion?

It’s no surprise that Moreno Bussoletti was born near Castelfidardo, Italy. The region is considered to be the world capital of accordion making. Accordion player and pianist, Bussoletti boasts a degree in pianoforte from the Gioacchino Rossini Conservatory of Music, a diploma in accordion from the Edio Marchetti School, and training in jazz piano at the Testaccio School in Rome. But putting formal music training aside, Bussoletti explains that truly great musicians “play the music of their experiences”, and hopes that his music reflects the unique and varied personal and musical journeys that he has chosen thus far. When performing, he feels that “it is the inside of me that is playing…my life is playing the music.”

Bussoletti’s music is jazz inspired, uplifting with a hint of melodrama; at any given performance, you might catch renditions of theme songs from The Godfather or Breakfast at Tiffany’s. Bussoletti has just returned from Italy, where he has recorded a new accordion album. Without missing a beat, he has booked solo and collaborative performances at various venues throughout the Kanto region this month.

…there are master music chefs
right here in Tokyo, consistently
serving up melodies to gratify.

For details on his many other upcoming events his official website can be visited at www.morenobussoletti.eu.

Jorge Diaz Rodriguez and Jun Kajitsuka are musical kindred spirits. The guitar/vocalists clicked upon meeting at a Spanish live show in Tokyo over a decade ago and have been playing together as Tempo Vivo since. Their combined repertoire of experience is practically intimidating. Rodriguez has appeared on Spanish television and performed for the Queen and King of Spain. Kajitsuka has made musical waves on the famous Japanese radio program Wakai Kodama and is recognized as one of the most prominent Latin-style musicians in Japan. Although Tempo Vivo draws from mainstream Spanish styles of music such as Salsa, Flamenco and Mariachi, it has its own unique sound whisch Kajitsuka terms “Spanish pop”. He adds, “listeners can interpret it as salsa or even rock and roll, but what’s important is that they have a good time and that the music itself is embedded with strong feeling”. Hence Tempo Vivo’s philosophy is to combine the Spanish concepts of “alegria” and “emocion”, or joy and emotion to their music. There was certainly an element of joy and emotion when Tempo Vivo performed at the Canadian Embassy in Tokyo last month, to raise money for YMCA Japan. Their efforts helped to raise over one million yen to be put towards assisting physically challenged Japanese children. 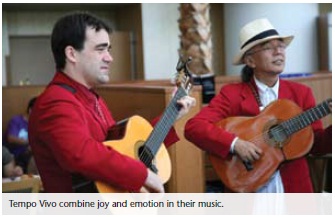 The duo plans to perform at another charity concert on the 23rd of this month, to benefit the victims of the Peru earthquake. For additional information on this and other upcoming Tempo Vivo performances, the band’s website can be viewed at www.tempovivo.com/en/ or Mr. Rodriguez can be contacted directly for information in English or Spanish at: 090-5779-3133.