Where Every Day is Valentine’s Day

Bobby Valentine is smiling a lot these days. That’s not exactly earthshaking news when it comes to the perpetually upbeat Chiba Lotte Marines baseball manager, who could make a second living as a toothpaste model. But if you’ve detected an extra shine to those pearly whites recently, you’re not mistaken.

“My players are healthy and in great shape,” Valentine said. “The new guys are fitting into the fabric of the team wonderfully. The entire organization has a totally renewed sense of purpose and energy. I’m feel­ing really, really good about this club.”

Valentine’s comfort should be the competition’s unease. One year after an epidemic of injuries derailed hopes of repeating as Asia champions, the Marines are a clear favorite in Nippon Professional Baseball’s (NPB) six-member Pacific League, which begins the season Mar. 24.

This past winter, Lotte bolstered its batting lineup with a stunning coup, signing free agent slugger Ju­lio Zuleta away from the archrival Fukuoka SoftBank Hawks. The hulking 197-centimeter Panamanian speaks five languages, but the number that has the Marines’ famously exuberant fans most excited is Zuleta’s league-leading 109 home runs over the past three seasons.

Factor in that the Marines still have the core of the historic club that swept the 2005 Nippon and Asia Series, including a league-high eight players from the Team Japan roster that won last year’s inaugural World Baseball Classic, plus a crop of rookies, Valentine is billing as the best in the franchise’s 58 years, and it’s easy to get giddy about Lotte’s chances on the field.

What has the trailblazing Valentine equally excited is the continued warp-speed development of the Ma­rines’ business operations, which in just two seasons has transformed from a Dark Ages outfit to the leaders of Japanese baseball’s long overdue modernization efforts. 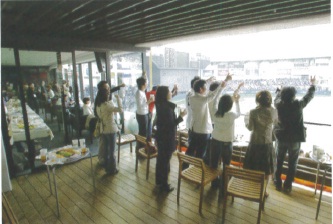 The Marines have combined high tech software in­novation (the only fully integrated CRM system in Japa­nese baseball) with drastically improved physical amen­ities at Marine Stadium, such as expanded play areas for children, new shopping and concessions options and a spectacular six million dollar VIP level that last year be­came a popular hangout for both the foreign corporate elite and A-list celebrities, none bigger than actor Tom Hanks, who attended a game with his four children.

“He was a real fan, too,” Valentine said of the two-time Oscar winner. “He stayed for the whole game and never stopped cheering.”

Since returning to Japan three years ago, Valentine has not stopped preaching NPB’s urgent need to im­prove its business practices, with frightening accuracy regarding the consequences of further delay.

The latest high-profile defection—pitcher Daisuke Matsuzaka’s $100 million move from the Seibu Lions to the Boston Red Sox—has only underscored Valen­tine’s prophecy that without new media strategies, bet­ter promotion of its players and a first-class level of customer service, especially for women and children, professional baseball in this country will wither away.

One team has fully heeded Valentine’s advice: his own. A slick internet site, a fan club that operates like an airline frequent flier program, and American-ball­park-style daily promotions, such as fireworks every Tuesday night, Ladies’ Nights on Thursday, and children running around the bases after every Saturday game, are among the literally hundreds of innovations that have led to the tripling of annual attendance at Marine Stadium since 2004.

Even the traditional features that make a Japa­nese baseball game so much fun are unique at Ma­rine Stadium.

The Marines’ right field cheering section, known as Team 26, performs original songs for each player rather than the standard chants you’ll hear at Jingu Stadium and every other ballpark. The Marines have a 70-member NFL-style cheerleading crew. Even their mascot, a seagull named Mar-kun, is rated best in Japan.

If sales continue at their pre-season pace, the Ma­rines will set a franchise attendance record for the fourth consecutive season, all without increasing the cost to the average fan.

Actually, one of the first things the Marines did af­ter winning the championship in 2005 was very un-Japanese: they lowered the price of their most expen­sive tickets, which are still only a third the cost of a comparable seat at the tomb-like Tokyo Dome.

The stunning turnaround has not gone unnoticed, by newly motivated rival clubs in Japan and baseball people across the pond. The Red Sox, New York Mets and Wash­ington Nationals have all expressed interest in forming a strategic alliance with the Marines.

The average fan in the US, whose appetite for Japanese baseball has been whetted by the hoopla surrounding Matsuzaka’s migration, will soon get his share of the Marines as well.

The foreign community in Japan has already caught
on to the quality of fan experience and the ease of
access… a 30-minute ride on the JR Keiyo
line from Tokyo Station.

Plans are in the works for Lotte to become the first Japanese team to have its authentic New Era caps sold in New York City and ESPN will follow the team this entire season for an epic 90-minute documentary to be re­leased globally next year.

The foreign community in Japan has already caught on to the quality of fan experience and the ease of access. Only a 30-minute ride on the JR Keiyo line from Tokyo Station, expats often take advantage of the proximity to Costco to make the trip to Makuhari a full day experience.

“It’s about a par-five from downtown, you get the fresh breeze off Tokyo Bay and they’ve got kegs on legs,” Shinsei Bank security honcho Jim Moynihan said of the omnipresent beer vendors. “They’ve got all you need for a fun day at the ballpark, without the need to take out a loan to finance it. I put it right up there with watching a game at Wrigley Field or Fenway Park.”

With their core base of Japanese fans mushroom­ing, the Marines are beginning to more strategically target foreigners and are developing a fan club for for­eigners called “Pro Yakyu International.”

One of the inaugural Pro Yakyu International events will be an overnight Cub Scout campout on the field after a game in June. The first group to sign up: the Cubs from the Tokyo American Club.

“Our mandate is to make this the most special fan atmosphere in Japan,” said Director of International Business Development Larry Rocca, one of only a few Americans working on the business side in Japanese baseball. “I haven’t met a foreigner yet who wasn’t thoroughly charmed by the experience of attending one of our games.”

Foreign corporations, like BMW and Deutsche Bank, are increasingly using Marine Stadium as a client enter­tainment venue. Others have taken advantage of the modern conference room to hold off-site events that include a meet-and-greet with Valentine and a ballgame.

Multi-national firms are also catching on quickly to the tremendous branding value inherent in being as­sociated with a team led by Valentine in what remains by far Japan’s Number one sport.

Hartford Life Insurance, the top-seller of retirement annuities in Japan, will have their logo on the front of the Marines’ jersey this season, a first in Japanese base­ball, apropos when you consider Hartford also insured Babe Ruth’s first Yankees contract.

But it’s the average fan that makes Marine Sta­dium so unique, and who comes away with the big­gest impression.

“If you’re an expat in Japan and you have not been to a Marines game, you have to put it on your list of must-do things,” said Mitchell Murata, a Tokyo resident and Mets fan since Valentine led them to their World Se­ries showdown with the Yankees. “By any comparative metric—dollar value for the ticket; quality of baseball; lifetime family memories created—it’s the best professional sports option in the entire country.”