I first met Enrico Derflingher, chef to royalty and pres­idents and quite a celebrity himself, many years ago when he was holding court at the Hotel Eden in Rome, where I was staying for a week. Before the Eden, he had cooked at the White House and at Buckingham Palace, as well as at many fine European restaurants. In Rome, he revived the hotel’s La Terrazza restaurant, a local institution that had once served dinners to the likes of Omar Sharif and Maria Callas, into one of Italy’s top Michelin-starred establishments.

At breakfast on my first morning at the Eden, I hap­pened to casually ask the headwaiter whether their fa­mous chef was around since I was having lunch there that day. Before I knew it, we were making our way to a small office at the back of the restaurant, where Enrico sat drinking a cappuccino and reading a newspaper. He must have been just as surprised as I was at this unexpected encounter; but he graciously listened to my mumblings. Later at lunch, he stepped out in his full chef regalia and strode across the fancy dining room— much to the surprise of other diners, and to the glee of my Rome-based Italian sister-in-law, who until then had only seen him on local TV cooking shows—and invited us on a private tour of his kitchens.

Before the Eden, he had cooked at the White House
and at Buckingham Palace, as well as
at many fine European restaurants.

After this, I never imagined that our next meeting would then take place over an espresso in Harajuku; and this time with Enrico in his new incarnation as chef and creator of his own enterprise, a casual modern Italian res­taurant called Officina di Enrico (ODE). This time around, he seemed more relaxed, energetic and enthusiastic.

“This restaurant is my baby,” he said, beaming hap­pily. “I designed or picked out most of the furnishings myself. The furniture is from Italy and the pottery is made by a Japanese designer.”

With its open kitchen, bare, fiberglass tables, bold colors and industrial materials, ODE is a world away from Enrico’s elegant European restaurants but perhaps closer to things and people he feels strongly about. The interiors are full of his ideas, while many of the restau­rant’s wines are made by friends (including Italy’s top winemaking family, the Gaja family). Even his second-in-command in the kitchen, Cristiano Pozzi, is from his hometown of Varenna.

“And what about the cooking at ODE?” I asked.

“Of course, it’s more simple compared to what I used to do at La Terrazza or at the Palace Hotel in St. Moritz,” he replied. “But essentially, the style is the same. Come back while I’m in Tokyo, and I’ll show you.”

This was all the incentive I needed to return two days later for dinner with my husband for a grand eight-course Degustazione di Enrico (¥15,000 per person).

Our meal started off with a glass of Bellavista sparkling wine (¥1,300 per glass) from Northern Italy, made by Enrico’s childhood friend, and a tarty palate teaser of tomato cappuccino topped with hefty truffle slices in a dainty glass. This was followed by an appetizer of paper-thin slices of pale orange salmon, arranged like a flower, dressed with caviar, and swimming in an on¬ion puree. The saltiness of the caviar and salmon complimented well the creamy dullness of the puree.

The next two entrees were pure bliss. First, a classic pan-fried foie gras served with a slice of brioche underneath and a spoon of fruit mustard made from apples, grapes, and honey. This dish held no surprises, but it was all refinement as it melted in our mouths—especially with a glass of excellent Italian sweet wine, La Tosa “Sorriso di Cielo” 2005 (¥2,000 per glass). Then came a deliciously innovative risotto flavored with Barolo wine and topped with Italian sausage and quail meat (Risotto Mantecato al Barolo con Quaglia Farcita alia Salvia/¥3,400). The rice was perfectly al dente, and it was both creamy and yet slightly sour from the wine; while the meat topping, which is not often seen in a risotto, was unexpectedly wonderful. It’s the kind of dish that sets Enrico apart from almost every other good Italian chef.

We also enjoyed immensely his sauteed veal on a bed of creamed potatoes with slightly caramelized onions on the side. The cuts were juicy and tender, but contained very little fat, and they were expertly seasoned with just a little olive oil, salt, and pepper. We felt the controlled hands of an expert who knew what he was doing.

For dessert, a vanilla-flavored yogurt mousse accompanied by frutti di bosco (assorted berries marinated in syrup) arrived, reportedly a favorite of the late Princess Diana. Yes, apart from his stint at Buckingham Palace, Enrico was also personal chef to Prince Charles and Princess Diana. Again, as with everything else we had that night, the flavors did not shout out at us, but rather spoke confidently in soothing whispers, as if they had no desire to impress but knew this would be inevitable anyway. The mousse was mild rather than sweet, so as not to interfere with the tangy taste of the berries.

Our meal then ended as perfectly as it started, with a rich and firm chocolate mousse and a glass of Gromis 1999, a deep and oh-so-velvety Barolo wine that—as far as I am concerned—was created by the gods to sa­vor with chocolate.

ODE is a casual restaurant, so the service is friendly and the pace quick. But the chef is world-class and the sommelier, who used to work at a Tokyo brokerage be­fore turning to wine, can hold his own against many of Tokyo’s fancier places. ODE has about 200 wine selec­tions on offer, which is amazing for its size and style. It may also have the widest variety of Gaja wines avail­able in this part of the world.

On our way out, we stopped to say goodbye to En­rico who was soon off to Italy for six weeks. He plans to spend six months of the year in Tokyo, with Cristiano (who formerly worked at the Antica Osteria della Ponte) taking over when he is away.

“Where are you headed?” I asked.

“I’m going home to Como,” he replied. Enrico lives in one of the towns around the lake, next to George Clooney’s villa.

“Are you seeing George?” I asked, half in jest.

“Probably,” he said, with all seriousness. “If he’s around, we may go biking together.”

And with that, I stepped out into the cold winter night and returned home to reality. 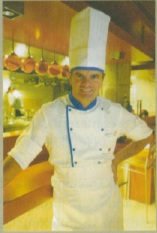 ENRICO DERFLINCHER
1988  At aqe 26, was selected from 10,000 applicants to become the youngest executive chef to the British Royal Family.

1994 Became executive chef of the Hotel Eden in Rome, der his direction, the hotel’s La Terrazza dell’Eden was chosen “Best Restaurant of the Year” and received its Michelin star. Enrico was also voted “World’s Best Chef.”

2003 Worked as executive chef of the Badrutt’s Palace in St. Moritz, during which time he was chosen “World’s Best Chef” two years in a row.

WHAT TO EAT
We had the eight-course Degustazione di Enrico, (¥15,000 per person), which seemed a good way to sample the chef’s specialties. The lady at the next table was having ear-shaped pasta with Sicilian to­matoes and Pecorino cheese from Sienna (Orecchiette fatte in casa con pomo-dorini pachino/¥2,600) and that looked good too.

WHAT TO DRINK
Ask chief sommelier Naohiro Yamazaki, who trained in Torino before the city was jazzed up by the recent Winter Olympics, to choose wines for your food. ODE has about 200 kinds of wine available, most of which are Italian. Some are famous names but others are interesting, good value wines that are just waiting to be discov­ered. And if you’ve ordered a chocolate dessert, by all means splurge on a glass of Gromis 1999 (¥2,500).

HOW MUCH DID IT COST?
¥60,000 covered our dinner and, between us, 16 glasses of wine to accompany each of our eight courses. Going easy on the wine will cut your bill in half.

WHO GOES THERE?
We were there on a Saturday night, and there was an even mix of Japanese and for­eign couples. Interestingly, several groups arrived after 9pm for a late dinner, which is rather unusual in Tokyo.