Protect Yourself with an Ancient Chinese Art

Martial Arts, with roots stretching from China to India and touching most of the world, are a bit  of a mystery to many people. It’s no wonder when you consider the number of different disciplines, the mental and physical aspects, and the question of sport versus art which all intermingle under one umbrella. One aspect of martial arts which has been gaining popularity recently is the idea of using a modified martial art for self-defense, especially among women.

Grace Kim, who grew up in Canada but now lives  in Tokyo, is making it her business to help women protect themselves with her new business, 3 Step Defense. A black belt by the age of 13 in Taekwondo, Kim grew up around the sport—her father is a grand master—and Kim got her start in the sport when she was just four. She progressed through the ranks in the sport of Taekwondo, achieving her Junior National title and even traveling to Korea to train and compete.

After an injury led to Grace’s retirement from competitive Taekwondo, she began to look at other ways in which she could be involved with the martial art. After speaking with her friends about two troubling incidents that happened to her, one involving a stalker at the University of Toronto, and once getting attacked by two men in London’s Victoria station, she realized that “I knew what to do, but anyone else wouldn’t have, which was shocking to me. I realized with this that I should teach women how to learn at least the basics for defending themselves, and the same for kids too.”

Grace has developed a set of three simple steps based in Taekwondo that anyone can use to get away from an attacker. She says she is amazed at how quickly people pick up the key moves they need to protect themselves, in as little as one session. Ideally, three sessions would be held—one to learn the steps, and two to practice and perfect the techniques.

For women, the very fact that Grace is a female is also a big plus—she won’t be trying to teach any moves unsuited for a female frame. She empathizes with women who don’t feel like they can learn from muscle bound body building types, as even with her experience, strength, and training she has had to alter some moves she’s been taught to fit her smaller frame. 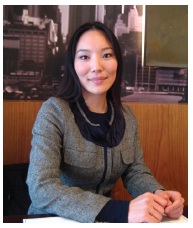 Grace teaches privately or to small groups in a flexible manner and can set up a personalized training program that goes far beyond the three steps if you catch the martial arts bug. The tailored classes and personalized attention mean that small flaws in technique are caught and corrected, and that you never move beyond your own pace. While 3 Step Defense is largely targeted at women and children, men are also welcome to sign up for a class. The three steps to self-defense were created with the complete beginner in mind, so don’t worry if you’ve never done martial arts before, or even if you aren’t an athlete—anyone can learn how to protect themself in a scary situation. For more information, email Grace at [email protected].