A gentleman who certainly knew his wok told me Ryutenmon was his favorite Chinese restaurant in Tokyo. Sufficiently intrigued, my husband and I went for a pre-Chinese New Year dinner last week.

My first impressions foretold an authentic experience. A cluttered table of knick-knacks, teas and sweets for sale at the door—what proper traditional restaurant in Hong Kong or China doesn’t have one?—and rooms with all the necessary props: ink landscape paintings on the wall, lacquered wood panels, brass hardware, and ornamental figurines.

The evening began with a de rigueur aperitif to whet the appetite: a small glass of rich 25-year-old Chinese rice wine (shoukoushu/¥2,200) with the spicy aroma of wood and fruit, and a taste similar to armagnac, which head chef Chin Kei Mei himself brought back from China.

A major gastronomic feast followed. First, live shrimps arrived in a large covered glass bowl which was then filled halfway with five- ear-old rice wine to intoxicate the shrimps (yaoparai ebi/¥3,820). They initially twitched and turned, but after several minutes they were dancing and jumping furiously inside the bowl like performers at the Cirque du Soleil. When they finally calmed down, a waiter wheeled in a portable cooking wagon on which the shrimps were flambéed in a raging fire, and then dropped, still ablaze, on plates of chopped onions. Of course, one experiences a twinge of discomfort at witnessing this kind of spectacle that is particularly prized by Chinese and Japanese gourmets. But any qualms we had were soon drowned out by the immaculate taste and soft, chewy texture of incredibly fresh drunken shrimp.

Next came a small plate heaping with seasonal Cantonese appetizers (yakimono no moriawase/¥3,470), including deep fried pork with crispy skin that crackled noisily as I chewed, salted roast duck, sweet stewed pork, vinegared burdock and red beans. Upon seeing this, I wondered why everything was mixed up like a garden salad instead of laid out more decoratively on a larger plate. After enjoying every bit of it, however, we realized that treasure hunting was more fun.

The muddy-colored soup that followed in a clay pot, the chef’s specialty (chef osusume tokusei soup/¥2,890), was filled with bits of pork, octopus, soft beans and root crop. It was perfect for the two-degree temperatures outside, and I felt like I was drinking the juice of the earth.

Two outstanding stir-fried dishes were served afterward. The stir-fried seafood (kaisen itame/¥4,620) had thick stalks of hairy crab leg that glistened with a ginger sauce, slices of jellyfish, field mustard and bamboo shoots, and unevenly chopped spring onions. Meanwhile, some leafy green vegetables we had chosen from a display cart were stir-fried in salt and century egg (yasai no shioaji itame/¥3,810) and then served in a soup made from chicken stock and salted Chinese ham.

We had several more delicious dishes, and the most innovative ones came last. First, live Ise lobster was braised in a clay pot (Ise-ebi no donabe shitate/¥6,700), and then some flesh was scraped out and mixed with ground meat, tomatoes, red peppers and green onions. The spicy mixture resembled an oriental pasta sauce, and it was colorfully arranged on top of half a lobster shell like an abstract painting. Next, thin and delicate egg noodles were served in a creamy soup perked up with green onions (again!) and chili oil (tantanmen/¥1,800). Tantanmen is a Chinese restaurant staple, but I’d never tasted soup this white and creamy. I later learned that chef Chin uses ground walnuts to flavor his broth. Finally, a dessert that made us smile. Golden-yellow mango pudding (¥920) arrived in the shape of a cute goldfish, swimming in a sweet milky soup—a nice end to a memorable dinner, and hopefully a good omen for the New Year. 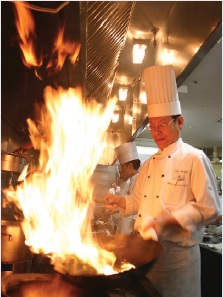 WHAT TO EAT
Ryutenmon’s menu is very unusual in Japan because you first pick the food material you wish to eat, and then you choose the method of cooking from a list of suggestions. When in doubt, the restaurant’s staff can make recommendations.

WHAT TO DRINK
Chinese rice wine, of course! Start your meal with 25-year-old shoukoushu (¥2,200) and then work your way through younger vintages for the rest of the evening. And don’t forget lots of Chinese tea afterward to aid digestion.

WHERE TO SIT
The interior rooms are quieter. Ask for a table with a view of the indoor bamboo garden.

WHO GOES THERE?
This restaurant has a big following within the Chinese community. Japanese businessmen and Ebisu residents also use this for business and private dining.