Almost on a dare, my husband and I visited Szechwan Restaurant Chen to see who could eat the most chili without surrendering to a glass of cold water. We both felt equal to the task. “I love Szechwan food and used to eat it all the time in Hong Kong,” my husband said, while I, having once lived with a Korean home stay family in Seoul, felt that a month of kimchi breakfasts and dinners had prepared me well enough for the task at hand.

Upon arrival, we immediately liked what we saw. The restaurant was bustling with people, as a good Chinese restaurant should be; and with its vermillion-red walls and large calligraphy posters, Chen looked stylish and fun.

Hiro-san, the manager, recommended that we start the evening with a pot of kouroku-an tea (¥1,000), a sweet blend of oolong and pu-er leaves and small orchid flowers, that supposedly contains lots of vitamins and fights fat as well. “Oh, I’m going to order that  every time,” I said. Unfortunately, this special tea is not always available because it’s so hard to source in China; but the restaurant will serve it on request if they have it in supply.

Our order of seasonal appetizers, including an unlikely medley of green peppers and tofu skin (yuba), and a spicy mix of lotus root and beef, arrived arranged like tiny artworks on a porcelain plate.

Then came a most unusual and delicious crab roe-and-shark’s fin soup: a thick and gooey mustard-yellow broth with flecks of bright orange roe and strips of shark’s fin swimming on top. This rich, buttery dish hinted of chili and shouted so lusciously of roe that everything else was drowned out.

For the first of our three main courses, slices of tender meat with just a bit of skin and fat for juiciness were arranged like a fan and sprinkled with duck liver and a garlic and chili sauce. Having grown used to the more traditional ways of eating duck (either Pekingstyle with Hoisin sauce or Western-style with a fruit-based sauce), I really enjoyed having duck with garlic and chili. The steamed eggplant and cauliflower that accompanied the dish were actually spicier than the meat itself, giving everything a hot aftertaste.

Next, deep-fried shrimps arrived on a bed of lettuce all sticky with peppery mayonnaise and red peppercorns. The chewiness and mix of sensations were very enjoyable, while the taste was not unlike takoyaki (baked octopus dumplings) with a dash of chili.

By now, the peppers and chili had sufficiently made their appearance and my husband and I had both survived. “Piece of cake,” I said, disappointed at the mildness of it all. I was almost tempted to ask the chef to up the ante a bit more. Well, he probably had mental telepathy because our final main course, stir-fried beef, arrived ready to set the building on fire.

It looked innocently tantalizing: choice beef slices fried in corn starch and smelling faintly of cumin, peeked out from among heaps of brownish-red pepper leaves that could have been used to make an autumn wreath afterwards. The first bite was pure heaven: sweet, slightly fatty meat with a bitter kick at the end. The second bite stopped all conversation at our table. By the third, sweat was pouring down our foreheads. You get the picture. We did, too; realizing that Szechwan cuisine is best enjoyed as Restaurant Chen does it, as a slow spicy build-up to a fiery finale rather than an all-out chili war.

The peppers had won and I was ready to go home, but I just couldn’t without tasting the dish that made the house of Chen famous. Restaurant Chen, you see, is managed by Kenichi Chen of Iron Chef fame—the only Iron Chef to have successfully kept his position throughout the show’s entire six-year run. His father, Kenmin Chen, who is known as the father of Szechwan cooking in Japan, created his own mabo dofu (spicy tofu) dish, a favorite household staple.

Chen’s mabo dofu is entirely different from anything else in Japan. Each spoonful has the deep flavor of topquality tobanjan (spicy bean sauce) and real spices, and the strong taste of ground meat and chopped onions, that put it a world away from other mabo dofu. It’s tasty and deeply fulfilling, and certainly worth braving the fire for. 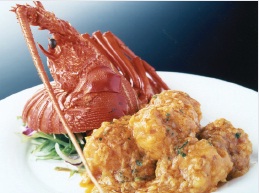 WHAT TO EAT
Start with a variety of seasonal Chinese appetizers arranged in a kaiseki-style, and then order the crab roe soup with shark’s fin. Then try a set of contrasting spicy dishes including sliced duck with steamed vegetables, shrimp fritters in a spicy mayonnaise sauce, and beef stir-fried in peppers. Top your meal off with mabo dofu, the restaurant’s specialty, or tantan-men, freshly boiled noodles in a tasty, spicy broth.

WHAT TO DRINK
Chinese rice wine, of course! The restaurant offers Shaoxing Hua Diao that has been aged in large earthen pots for three to 15 years. The 15-year-old wine was smooth but heavy, while the 3-year-old was easier to drink and almost like sherry.

WHERE TO SIT
The counter seats are the most fun, and are reportedly a great favorite with foreigners, who prefer the more casual setting and love watching the chefs in action.

WHO GOES THERE?
Lots of chili enthusiasts, as well as hotel guests. An American gentleman, who used to live in China, supposedly dines alone at the bar every week.

WHO TO ASK FOR
Restaurant manager Hiro-san is a superfriendly guy who will try to accomodate every request—including those for more chili!