High-flying Eve Hulbert checks out all the airline competition

For many, flying is an experience in itself. It offers the chance to lay back and relax, to sample the specially prepared foods and fine wine, to watch a movie, or stretch out and sleep until you arrive at your destina­tion. For the rest of us, there is Economy Class, where passengers are stuffed like sardines, stuck eating luke­warm, rubbery food.

However, ask any regular EC flyer, myself included, and they will no doubt have a preferred airline that makes economy bearable, and I am not talking about the time that Qantas upgraded me to Business Class. For me it is Singa­pore Airlines, and as I am destined to fly economy for a while yet, I would rather it be with them.

Please bring your seats to the upright position and
adjust your tray tables because the current to long-term
market outlook for the airline industry is robust.

For travelers fly­ing First Class, choosing an airline may be a little trickier than their EC-flying counterparts. Luckily an independent airline research company, Skytrax, have just released the results of their 2005 survey, which may make the decision a little easier. Skytrax gathered over 12 million responses from 94 different countries to pick the best airlines in the world.

Awards were given for sections such as ‘Best of Class’, ‘Catering’, ‘Service’, ‘Comfort’ and of course the ‘Top Ten Airlines’. So without further ado, the top ten are (drum roll please):

According to the survey, Cathay Pacific was repeat­edly singled out for the high quality and consistency of its front line staff. The motto is “service from the heart” — which has obviously been taken to heart by Cathay as they were awarded this prestigious title.

Taking a brief look at the services offered by Ca­thay Pacific, it is not hard to see why they have been chosen as the best. One outstanding feature is that passengers flying First Class are able to have their breakfast ‘created’ by the chefs on board — something that would definitely change my choice of carrier if I were flying First Class.

In Business Class, Cathay features a bar that “is a sleek space for communal mixing and mingling,” which sounds almost as inviting as having my brekky made to order. For us Economy Class flyers, the news isn’t all bad either. Although the exciting ‘breakfast creation’ isn’t available, Cathay does offer its Econo­my Class passengers online check-in, updated flight information sent to your cellphone, and extra storage space — more reason to load up on duty free.

Looking at the air­line industry over the past few years, it is hard to believe that airlines can afford to offer such serv­ices as personal chefs. Some of the more cynical read­ers may even argue that the list of top ten airlines was comprised mainly of national flagship carriers likely to enjoy subsidies from their governments, and that the airline industry may not actually be in a very healthy position. After all, United Airlines went bankrupt in December 2002, while many other legacy airlines continue to teeter on the brink of suffering a similar fate.

However, please bring your seats to the upright position and adjust your tray tables, because accord­ing to Boeing, the current to long-term market out­look for the airline industry is robust. Boeing even states that after the decreases in 2001-2002 due to 9/11 and Severe Acute Respiratory Syndrome (SARS), there has been a double-digit increase and world air traffic has reached a new high. Great news if you’re an airplane manufacturer, but likely to positively influence the commercial airline industry nonethe­less. Obviously, the major determinant of air traffic growth is economic growth, so as long as China and India keep growing at a significant rate, airlines are in for a rosy future.

Many airlines are running on cost-reducing measures and cutting less profitable routes, so as travelers, we will see the choice of destinations becoming fewer. However, with a bit of luck, all the new alliances that seem to be popping up everywhere will help eradicate this problem.

The general dive in the airline industry has made some of the more established airlines more flexible, and this also may coun­ter the aforementioned problem. Northwest Airlines Chief Executive Officer Douglas M. Steenland told the American Chamber of Com­merce last May that Northwest plans to invest in new, smaller long-range aircraft. This would al­low the planes to fly at full capac­ity, even along competitive routes. They will also be able to fly from less competitive airports, which is beneficial for them as they don’t have to fight among numerous airlines for a limited passenger pool. It’s also really beneficial to us, because it would allow for more travel routes.

As great as Northwest Airline’s efforts are, the prob­lem of cost cutting remains. Airplanes are flying fuller these days at an attempt to lower operating costs and squeeze more revenue from each seat. This is causing issues for frequent flyers trying to claim flights or up­grades. It also means that members of the travel in­dustry, long used to the perks of free/highly-reduced travel, are being bumped for paying customers.

We are now seeing an industry that is fighting for our money. As potential passengers, they want us, and are going as far (in Cathay Pacific’s case) as offering us economy punters extra storage space. So the good news is, even though we’ll still be at the back of the plane, we won’t be forgotten. However, with all the charge increases, charge decreases, cut services and now services, it’s enough to make your head spin. As the airlines provide carrots to beat out their competition and sticks to squeeze more money out of us, it’s up to travelers’ to become airline savvy and do their research about what services are offered. So, next time you reserve a flight, do your homework and get the best deal and services available. Bon voyage! 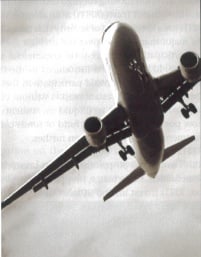 Some interesting milestones in the history of the airline industry:
1903 The Wright Brothers make their first successful flights. Orville Wright succeeds in flying 39 meters, a distance shorter than the wingspan of the Boeing 747.
1906 The first airline, DELAG, is established to carry passengers between German cities by Zeppelin airships.
1922 Pitcairn Airlines provide the first ever airsickness bags.
1926 A license is required for flying a plane with passengers or cargo. Prior to this, a pilot’s license was not necessary.
1958 Qantas starts the first around-the-world passenger service by an airline.
1987 American Airlines saves $40,000 by eliminating one olive from each salad served in first class.
2005 Nine women were injured in the crowd that greeted the actor Bae Yong-Joon, better known as ‘Yong-sama,’ as he arrived at Narita airport during the height of Yong-sama fever.