Clearing up some facts about celebrating love

Valentine’s Day. I doubt that there are many among us who jump up and down with excitement at the mention of it. Certainly, sly smiles will creep to the lips of some as they entertain private and naughty thoughts of loved ones — or ones they dream of lov­ing. Others will shrug it off as if it were Arbor Day, or Groundhog Day. “Do we get a day off work? No? Then who cares…” Still others will recoil, as averse to Valentine’s Day as cats to water.

However you feel about Saint Valentine’s Day, though, it’s big business. In the U.S. alone, people will spend nearly four billion dollars on valentine cards and valentine-related gifts this year. Billion — with a “b”. That makes it the second largest card-sending holiday after Christmas — and we just finished with that. It’s little wonder the day has come to be seen as nothing more than a mere Hallmark holiday, the heartfelt sentiments portrayed in store windows no deeper than the half filled cavity of some mass-pro­duced chocolate — and just as hollow.

Regardless of the hoopla that surrounds it today, the history of Saint Valentine’s Day is much deeper. In fact, its roots are older than Christmas, older even than the founding of Rome.

Ironically, the origins of what we now know as Saint Valentine’s Day are not associated with a saint at all. We owe it all to the seeds of spring, the natu­ral order, and the flood of urges and hormones that gambol through our systems come this time of year. Oh yes, and pagans, we owe a lot to them, too.

In pre-Christian Rome, the middle of February marked the start of Lupercalia. This licentious and lusty festival consisted of rituals to ward off evil and, more importantly, to promote fertility. During the festivities, young males chosen to wear the skins of sacrificed goats ran through town with strips of the bloody hide, in imitation of Faunus, the god of fertility. Young women would eagerly come forward to be touched by these blood-soaked strips (incidentally known as “februa”), for it was believed to ensure conception.

The highlight of the festival was a love-lottery, sort of an ancient take on the swinging Seventies “key party”. Eligible young men drew the names of young village maidens from an urn. The pairs became sexual partners for the duration of the festival. More often than not, this led to the couple’s marriage and the pitter-patter of little pagan feet, as was hoped.

Valentine himself didn’t appear until nearly a thousand years later, when fact and myth inter­twine. According to historical record, there were a number of Valentines martyred in the latter half of the 3rd Century. It seems Claudius II, the Roman emperor at the time, had it in for guys named Val­entine — at least, Christian guys named Valentine. Apparently, Claudius had trouble with his army, more to the point, recruiting. How do you main­tain an evil empire (he was known as Claudius the Cruel) when all the soldiers want to stay home and cuddle with their wives and family? Why, you out­law marriage in the military, of course. Enter Valen­tine and the birth of a legend.

On Feb. 14, in 278 A.D., the day before the feast of Lupercalia, Emperor Claudius II had a priest named Valentine beaten and beheaded. The stories vary. Perhaps it was for not giving up Christianity. Perhaps it was for defying the marriage ban and se­cretly hitching young couples. At any rate, from here the romantic myth surrounding his execution gets piled on. Thick.

Through embellishment and artistic license (most likely from those foppy, melodramatic English Roman­tic poets… alack and alas!), we now read that during his confinement, Valentine befriends the daughter of his jailor. They fall in love. Now, not only is she the daughter of his jailor, but she’s blind as well. Valentine then performs a small miracle, curing her blindness. She doesn’t run away in fright, we can assume. Yet, it is all for naught. Even the grateful jailor cannot stay the execution. On his final night, alone in his cell, Valen­tine writes a note to the woman he loves. He signs it, “From Your Valentine.” A legend is born.

Times change. The Romans turn from brutally converting people to paganism, to brutally convert­ing people to organized religion. So by about 496 A.D. the lusty Lupercalia had become intolerable, un­civilized, and decidedly un-Christian. Pope Gelasius I bans the festival, preempting it with an official, religiously sanitized one. He declares February 14 a feast day in honor of Saint Valentine’s great sacrifice. Then, like a bad 1980’s B-movie high school princi­pal changing the theme of the prom, he states the promiscuous love-lottery is now a lottery of saints. The saint whose name you draw is the saint you will emulate for the rest of the year. No more easy hook­ups for shy young Romans with hearts all a-twitter. Valentine is now the patron saint of unrequited love, love under duress, not Durex©.

The valentine itself — the card, the gift, the token of affection — gains popularity in the Middle Ages, when more and more people start to, well, write. At that time, February 14, the heart of the month, was also recognized as the time when birds paired off to mate. It springs up in literature in the 14th Century. Chaucer, that great misspeller, makes the first literary connection between St. Valentine’s Day and matters of the heart in Parlement of Foules in 1381. Buried near the end of this 700-line poem he writes,

for this was on seynt Volantynys day
Whan euery bryd comyth there to chese his mate.

Then in 1415 someone had to go and make a card. In prison, no less. That man was Charles, Duke of Orleans, imprisoned in the Tower of London after his loss at Agincourt. He managed to send a love letter to his wife,

That verse is now the oldest known valentine in the world, and sits in the manuscript collection of the British Library. Apparently, whether it is romantic in­vention or just one of life’s consistently cruel twists, we have always suffered enormously for love.

The modern era changes everything. The valentine changes to become the item given: the crepe paper Cu­pid, the heart-shaped box, the kinky personal ad. It is no longer the term given to the beloved, the person aching with longing. Around 1847 it becomes a depart­ment store purchase.

An American woman, Esther A. Howland, mass produced valentines patterned after a lacy English val­entine she had received. Her father owned a book and stationary store, and her initial output could not keep up with demand. She went on to be known as ‘The Queen of the Valentine’ and her assembly line lace-and-ribbon, satin-and-bow cards gave birth to the mass produced greeting card of today.

Consumers will send out over one billion of these trite tokens of sentimentality this February. Whether you receive one or not, keep your cynicism in check. Just remember the poor fellow who sent the first one. Even if you can perform a miracle for her on Valentine’s Day, it doesn’t mean the day after will be any better. 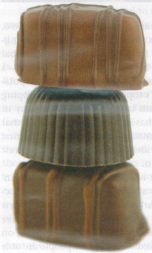 • Valentine greetings were popular as far back as the Middle Ages (written valentine’s didn’t begin to appear until after 1400), and the oldest known valentine card is on display at the British Museum. The first commercial Valentine’s Day greeting cards produced in the U.S. were created in the 1840s. Esther A. Howland, known as the Queen of the Valentine, made elaborate creations with real lace, ribbons and colorful pictures known as “scrap.”

• According to the Greeting Card Association, an estimated one billion valentine cards are sent each year, making Valentine’s Day the second largest card-sending holiday of the year. (An estimated 2.6 billion cards are sent for Christmas.)

• Approximately 85 percent of all Valentines are purchased by women. In addition to the United States, Valentine’s Day is celebrated in Australia, Canada, the United Kingdom, France (and other European countries), Hong Kong, Japan, Korea, Mexico and Taiwan.

Valentine’s Customs Around the World

While Saint Valentine’s Day is primarily a Western holiday, it is observed in many countries around the world. In Japan, it’s all about the chocolate, of course, and the fact that only women give them. Here, the young ladies give pretty much every man in their office or work circle giri choco, or obligation chocolate. At ¥300 to ¥600 apiece, hopefully she doesn’t work for SONY or Toshiba.

While this may seem very commercial, and it is, heartfelt and hand-made valentines are extremely prized. It is honmei, or special, chocolate, and a woman lovingly conjures it up (or purchases it for an exorbitant price) especially for the one man in her life. It might even include a handmade card and a sumptuous dinner. This is a beautiful rebellion, for the origin of Valentine’s Day in Japan is purely commercial, no saints involved.

In 1936, Kobe chocolate company Morozoff (founded by a European) tried to use the day to induce the public to buy its chocolates. Being highly militarized at the time, chocolate was a luxury nobody could afford. It flopped. They tried again after the war, in 1952, with a modicum of success. Then, in 1960, confectionary giant Morinaga tried their, “Chocolate for St. Valentine’s Day” campaign, and the female public swallowed it up.

Not content with just that, the shrewd Japanese commercial machine rolled out White Day on March 14, one month later, to capitalize on the sense of giri, all the men who received giri choco are expected Lo return the favor with, you guessed it, white chocolate. Oh! The wheels that wind the Japanese consumer machine!

Just as the Japanese added another day to the social calendar, so the Koreans added a third: Black Day, April 14. On this day, those that spent the previous two lovers’ holidays alone, get together with sympathetic others to commiserate over beer, shochu, and slurp generous helpings of black jajang noodles.

The backlash to Saint Valentine’s Day seems to spread as much as the event itself. This has prompted many cynical singles in the West to christen it Singles Awareness Day.

In countries such as Thailand, Laos, Sri Lanka, India, as well as Saudi Arabia and other Muslim countries, edicts have been issued to curb the enthusiasm of a celebration deemed “a perverted form of western culture.” In 2004, the Saudi Fatwa Committee said, “It is a pagan Christian holiday and Muslims who believe in God and Judgment Day should not celebrate or acknowledge it or congratulate people on it…”