The Real Deals in Heels

Success in the city

Vanessa Bell looks surprisingly vibrant, considering she works up to 15 hours a day. Every morning, she gets up at six o’clock and starts preparing the day’s lunch menu. She takes a break at around seven, to get her two young children dressed and ready for nursery school. Then it’s the start of her day — taking custom­ers’ orders, cooking the meals, and coordinating staff runs, as well as dealing with the general book-keeping that comes with running a business.

Anita Lee’s life is just as hectic. Though she says it’s difficult to describe a typical day because it always changes, she usually arrives at work around 8:30am, after taking her son to daycare. What follows is a day of meetings, responding to emails, and negotiating with overseas suppliers. At night, she often finds some time to fit in a few extra hours of work when her son is asleep.

“I laughed hard because I overheard a
male competitor say that he would rather
die than work for a woman.”

Work is a subject Alison Pockett knows all about. After coming to Japan in 1994 to help set up the Tokyo branch of a Hong Kong-based financial company, she decided very quickly it wasn’t for her. So she set up her own company eight months later. Regardless of the blood, sweat, and tears, Alison has never looked back, and still manages to keep a wicked sense of humor.

Women like Vanessa, Anita, and Alison are not alone. Many women are running their own businesses in Japan. In a country where ordering a cheeseburger without pickles can spark mass hysteria, followed by a sympathetic, yet resounding “no”, one can only imagine the brick walls these women come up against start­ing and maintaining their own businesses. This — in addition to a patriarchal business culture, a different perception of a woman’s role in society, a perpetual language barrier, and possible children to take care of — would be more than enough to deter any upcoming female entrepreneur. However, these women, despite the challenges, have managed to do it, and do it very well.

All of the women found starting a business a lit­tle tough. The vast differences of opinion on how a business should be run created initial difficulties. “In the first three years of Magellan’s life, this proved to be a costly and a very mentally draining experience for me,” Alison says, but “today, Magellan is fortunate enough to have a very well balanced team of people.”

Anita says the biggest problem was trying to set up a business in a country where established relationships and introductions are fundamental. “I had lived in Ja­pan for over six years, so I had a good understanding of the business environment,” she says. “If my husband and I had not lived here for so long, it would have been much more difficult to develop my company.”

Vanessa also found contacts important. Initially, she just delivered her lunches for some extra pocket money. However, after being reprimanded by the authori­ties, she decided to formally register her business, only to be told she couldn’t. “If you ask first, they’ll say it can’t be done,” she says. It wasn’t until she found a Japanese man willing to help her that the business really got off the ground.

It was at this stage that Vanessa realized, despite the relatively sexist nature of business culture in Japan, being a woman could be a benefit. “People seem to be more forgiving of women here,” she says, referring to some of the initial hiccups while forming the company. “They thought that because I was a woman, I had no idea what I was doing, so they’d be extra helpful.”

Alison agrees that being a woman is a plus. “A few years ago, I laughed hard because I overheard a male competitor say that he would rather die than work for a woman.” However, she thinks men like that won’t be around for too long, and that being a woman definite­ly has its advantages. For example, success becomes all the more rewarding. “In some ways, even today, people don’t expect women to be at the forefront of a company, and when your company is successful, it carries a different kind of respect.”

On the other hand, the female factor can bring its own set of problems. “Being a foreign woman here is challenging in itself,” Anita says. “On a business level, I accept that we work within a special cultural context and this means being sensitive to how people react to my being a woman. Sometimes, that means accepting that I may not be able to deal with a particular person directly.”

Both Vanessa and Anita find however, the most challenging part of being a woman, and running a business, is relegating time to various roles. “Balancing work, home, and family life involves compromising in some areas, and I think it’s important to accept that, so that you can focus on what really matters to you,” Anita explains. Vanessa agrees adding that weekends are always the hardest: “We usually do catering events over the weekend — it’s really tough not spending time with the kids.” 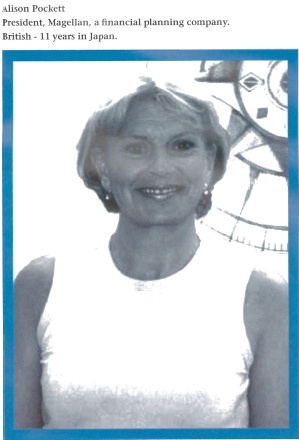 Challenges aside, Anita thinks there are a lot of opportunities out there for women wanting to start their own business, especially in the travel and lifestyle markets. She also sees the rapidly growing and diversifying expatriate community as a potentially huge market. “Many foreign entrepreneurial women in Japan identify gaps in the market based on what they miss from ‘home’ and then set about providing that within a Japanese setting.”

Vanessa’s business is a perfect example. “I used to work for a company in Gotanda, and there wasn’t a lot for a vegetarian to eat around there,” she says, “so I started bringing my lunch to work.” Soon enough she was bringing lunch for everyone in the office. “I thought, I can do something with this.” But going from there, Alison says, takes a lot of time and dedication. “Find your niche and stay focused,” she advises. “Do not under any circumstances go into business for yourself if you are low on energy, need eight hours sleep a night, get sick easily, want the weekend off, or have difficulty facing conflict.”

And don’t these women know it. Yet despite the plethora of challenges, these women glow. It’s why-Vanessa is still vibrant after a couple of hours sleep, Alison laughs a lot, and Anita still manages a smile after a hard day at work.