Music of the masses: Japanese indies make some noise

In the basement of the Disk Union shop in Shinjuku there is a floor labeled, appropriately enough, Japanese Underground. When you descend the claustrophobic staircase, you are greeted by shelves overflowing with jumbled stacks of discs from every genre — releases from independent Japanese bands still unknown on the charts. All of these acts are waiting for their turn to rise to ground level.

This is the root cellar of Japan’s indie culture — the ori­gins of the rising tide of bands that refuse to be ignored, recording their own work, starting their own record labels and seeking distribution in any way possible.

While the popularity of independent music may have started in dark basements such as this, Japanese indies have spilled into the mainstream in a big way.

In the past few years, indie music has gone from mere tol­erance to unchallenged profitability, and the industry is mak­ing room for the boom. Oricon, the Japanese Top 30 music chart organization, has added two indie charts to its long standing pop and enka regulars.

MTV Japan and Space Shower TV devote time to inde­pendents, and music stores and radio stations have followed suit. Japanese live houses such as Deseo in Shibuya regularly see more than 80 bands play in a single month, and Indies Issue Magazine puts out a sample CD of 15 up-and-coming groups every month, along with articles on all of the bands involved,

Japanese independent music is here to stay, and the music industry is scrambling to keep up.

Japan’s music industry is a strong and largely self-con­tained entity, second only to the United States in sales figures. For more than a decade, the Japanese music scene has been so dominated by its own home grown acts, imports have barely made a ripple in the CD sales pool.

At the end of June, Oricon charted only one foreign album in the Top 10 and no singles whatsoever. Foreign music sales may be up from the 11 percent market slump they hit four years ago, but still count for less than 30 percent of sales.

Japanese music is big, big business, and for a long time Japan’s manufacturing culture applied the same rules to hir­ing musical talent as it would have to hiring computer pro­grammers or engineers for any factory — scouting promising youths fresh out of music schools or talent agencies and set­ting them to work, producing pop stars.

For these production agencies, music was not meant to be made by the individual. It was a company effort.

Companies such as Johnny’s Jimusho (responsible for entertainment giants SMAP and Tokio) re-created their new “idols” from the ground up. Not expected to have any inher­ent talent, the idols-to-be were groomed by professionals, had their songs written for them, their moves carefully choreo­graphed and their music produced by in-house studios. There was simply not much room for talent in the idea of “talento.”

But in the mid-1990s, when a sudden proliferation of independent labels began to shake the hold of idol culture, something more organic arrived. Underground bands had begun to set up their own companies, realizing the newly arrived foreign record companies such as Tower and HMV were more than happy to sell independent CDs.

This direct distribution to record stores suddenly meant smaller acts in Japan were no longer limited to selling albums at live shows and seeking out elusive deals with the big com­panies; the big companies would have to start coming to them.

The public was happy as well. The new bands filled the need for a more vibrant and down-to-earth music scene. In 1997, when a young punk band called Hi-standard estab­lished its own label, amusingly named Pizza of Death Records, the second album Angry Fist did something no one had seen before: it entered the pop charts at No. 1.

The dawn of indie music in Japan had arrived, and a nation full of ambitious youth jumped aboard.

A Place to Play 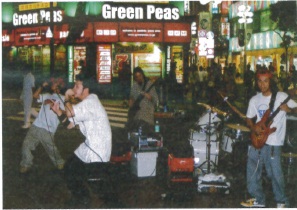 On any given weekend in Shinjuku, you’ll find any num­ber of bands, kitted out with full sound systems, and even sometimes stage lights, playing to the more-or-less indiffer­ent passers-by in various popular spots around Shinjuku Station.

The noise is huge and the atmosphere cordial. Bands and soloists await their turn; they churn out three or four songs, then pack up to let another band take over.

This is more than a Japanese-style street performance. It’s a chance for struggling bands to show off their music, plug live shows, peddle demo CDs and, to some extent, practice — even at the risk of being hauled off and ticketed by police, which happens regularly.

Tokyo, after all, is not a musician-friendly city. Closely packed apartments and paper-thin walls mean there is little tolerance for bands attempting to practice at home. Silent electronic drum kits and guitar amps rigged with headphones may be fine for the soloist, but being in a band above all means group practice and making some noise, and putting in serious jam time usually means putting out serious money.

In fact, new indie bands generally put out far more money than they take in. Practice studios can be found all over the city, charging prices in the range of ¥1,500 to ¥2,000 an hour. All-night deals, allowing bands to jam from midnight to 8 a.m., can cost as much as ¥3,000 an hour.

While it may seem ridiculous the wee hours of the morn­ing should cost more than the middle of the day, arranging time for several band members to practice can be difficult. The night schedule is often the only chance for the whole band to get together and still balance the unfortunate reality of day jobs.

Of course, the cost of jam space seems low when com­pared to the cost of recording. Small-scale production costs have gone down somewhat, since the explosion of indie labels boosted competition for cheap recording studios. But even prices for the cheapest studios begin at ¥7,000 per hour, and that is without the help of a professional sound engineer.

In a Shibuya live house Shunsuke, the singer for starting indie band Samlive, smiles as I pay for my demo CD.

Add the price of renting equipment, mastering the rough copy of the recording, burning CDs, printing labels and flyers, and the whole process begins to look a bit pricey for your average student worker at Yoshinoya.

“We just work at our part-time jobs,” says Shunsuke, shrugging, “and pay it”

Jumping on the bandwagon

Summer rock festivals work as a kind of proving ground for indie acts and, looking at the main stage lineups for this summer, the presence of indies-gone-big is hard to ignore.

Among the headlining foreign acts are a strong represen­tation of Japanese groups, all of which started out small and have since become household names in Japan.

Fuji Rock Festival 2004 features such notables as Husking Bee, Mo’some Tonebender, and the very unusual Buffalo Daughter. But rising above the others are recent rock favorites Asian Kung-fu Generation who will not only play Fuji Rock Festival, but also the indie-based Rock in Japan fes­tival.

Before Asian Kung-fu Generation was picked up by Sony, the band sweated it out the hard way. The group played together for almost four years before deciding to self-produce its first album.

Taking advantage of every opportunity makes people lis­ten, the band not only sold copies at live shows, but also set up a Web site for orders and began sending the CD to every indies radio program the members could find.

The publicity they earned for their efforts was enough to find them a place on a compilation disc put out by independ­ent label Under Flower Records who eventually agreed to sign the group. When Under Flower released the group’s second album it entered the Oricon charts at No. 35. Under Sony, their last single went to No. 8. 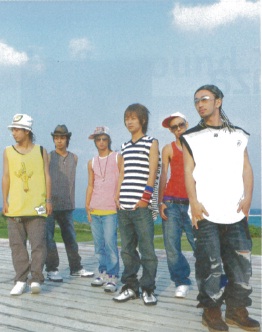 Another huge festival draw is Orange Range, whose last single sat atop the charts in the No. 1 position for two weeks. Sony signed the band only two years after it start­ed, and cynics might say the group took advantage of the Okinawan fever that has swept the Japanese music scene in recent years — riding on the coattails of last year’s melo-core newcomers, Mongol 800.

But Orange Range hopes to avoid the Okinawa branding. “I express the words and music with no influence from Okinawan music,” singer Hiroki told the Okinawa Times. “It comes out naturally from inside me.”

The group started by playing at a junior high school grad­uation party. Within a year, it had played more than 70 live shows, recorded a mini-album with Spice Records and was playing festivals with big names such as pop group Do As Infinity and J-rock band Love Psychedelico. Sony took an interest and brought them on board.

Orange Range won an MTV Japan award for best new video, and the group’s most recent album landed second place in Japan and placed in the Top 30 in internation­al sales. That’s a long reach for six boys from the southern islands.

Indie bands may never replace J-pop acts entirely; Japan will surely have a place for Ayumi Hamasaki and Ken Hirai for a long time to come. But what the indie trend does indicate is not only a shift in public musical tastes, but also the embrace of a wider variety of choices in popular music.

The message is talent does matter, and it seems audiences and even record executives are ready to listen.