May rounded the corner and we found our­selves on our way to Japan. Nate Nash’s production company, 540 Content, was working on its third film in “The Players” series, and the team included world champions Eric Southwick and Clay Wright, 15-year-old paddling phenom Pat Keller and myself.

We had logistical support from Brian Eustis (from Horizon Line Adventures) and Nate, man­ning the 16-mm. camera as usual. Together we formed The Players, and we were ready to go big in Japan. 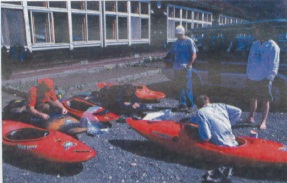 As planned, we all met at the Sapporo airport where Patrick picked us up. We then headed east into the heart of the Hokkaido mountains. Our base camp for the next two weeks was at Patrick’s rafting company, Hokkaido Outdoor Adventures (HOA), in Hidaka.

The company is run out of a modified elementary school, and it had all the facilities we would need, including a small gymnasi­um (in which to hang gear), a huge kitchen to cook great meals, an office with Internet access and several classrooms to serve as sleeping quarters.

The whitewater on Day One started with a bang. After driving through a labyrinth of tunnels and mountains dotted with cher­ry blossoms, we pulled into the Chidorigataki Falls on the Yubarigawa (Yubari River) to get our first glimpse of Japanese whitewater.

Before us stood a solid Class V falls that dropped about 25 feet in 25 yards over four broken ledges. The water had carved out channels in the sedimentary rock, and I could tell high water would form big trashy holes. Fortunately for us, the rivers flooded the week before and had subsided to medium-to-low flows for our warm-up. 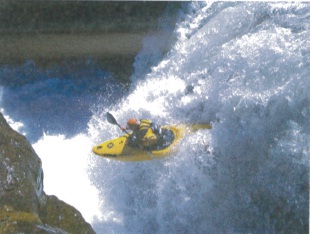 It was obvious Pat Keller was on a mission for an adrenaline fix. He was the first person dressed into paddling gear, and the first to seal launch into the rapid (after a thorough scout). He aced the rapid and gracefully made it through, despite the rough geolo­gy that made the spot scrappy.

Once Keller made the rapid look easy, everyone took a couple runs, and we burned our first rolls of film. This drop set the stage for a successful trip, and we headed back toward Hidaka under a darkening sky.

Back at HOA, Naomi and Masami had prepared our first taste of Japanese barbecue. The Asahi and Sapporo beers were cracked, and the celebration com­menced. The day’s runs were recounted by the paddlers, and we planned the next day’s activities while feasting on bean sprouts, onions, mushrooms and barbe­cued lamb. This hospitality car­ried on for the rest of the trip.

The rain gods awoke on Day Two and brought all the rivers back up to high levels. The emer­ald green rivers turned into surg­ing brown torrents. We quickly loaded our play boats onto the trailer.

We first ran the Mukawa River, a class III commercial raft run, and then Sarugawa, a high-velocity play run (we ran five kms. in 20 minutes). Both were quite enjoyable and contained lots of good surf waves and holes. This was a great way to get loosened up for what was to come.

Our first real adventure was on a river HOA uses mainly for canyoneering: The Chiroro. It begins with a 25-ft. runable dam (they don’t make these in the U.S.), and then the creek drops into a tight box canyon decorated with delicate waterfalls and sparse green vegetation.

The Class III and IV canyon contains tight corners and steep rapids with narrow run-outs for the next mile, before dropping over a 15-ft. multi-tiered explosion that pounds the canyon walls.

Southwick rappelled down onto a steep ledge right at the lip of the drop to set up safety, while young Pat pioneered the route. We all ran the drop and continued down the creek The canyon tight­ened below, and then dumped over another 20-ft. dam. We took out just below this drop and head­ed back to base camp to study the topographical maps for more steep creeks.

The Yu Tomuraushi was the next drainage picked for explo­ration. This creek starts at a geothermal hot spring and gouges a foreboding slot through a three-km. canyon dropping 348 feet (according to Wicks GPS). There is minimal opportunity to climb out because of its steepness.

After a full day of scouting and finding huge bear paw prints (from a Yezo brown bear), we decided not to run the creek. Instead we ran the Nupun Tomuraushi, the river into which the Yu Tomuraushi flows downstream. This run contained easier Whitewa­ter. It does, however, etch its way through a spectacular gorge (with 300-ft. vertical walls in places).

As if the view wasn’t good enough, we even found a pair of six-point deer antlers lying on the riverbank. In search of more whitewater, we headed south and west to the Niseko area and paddled a creek called Pepenai. This run is short and steep with only three major rapids; all easy Class IVs, but the back drop is spectacular, with Mt. Yotei standing large in the back­ground of the creek. This was one of the most memorable experiences during our trip.

A bit further north we then ran the Shiraigawa. This creek is similar to Chiroro, but with a big­ger waterfall (six meters) which we called the “crack in the earth.” It had significantly more water in it, and the level rose throughout the day due to snowmelt. We all ran this drop successfully despite the tricky lead-in rapid with half the water going under a rock before falling off the lip of the falls. All this practice set the stage for our last day in Japan which was the most challenging.

The Nubegawa, in the beauti­ful Furano area, was only an hour’s drive from our base camp. We had to trek with our kayaks for just under an hour along a trail; the last part was all snow-covered. The section we paddled falls close to 400 ft. a mile. It has four waterfalls, the smallest being 20 ft., the largest 35 to 40 ft. The rapids in between were low-volume tight and very technical. The whole team ran the creek flawlessly with great help and support from the HOA crew. It made for some great video. 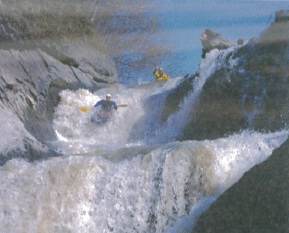 The trip seemed to end as abruptly as it started. In all, we paddled 13 rivers (or parts of rivers) in 12 days. Thanks to Patrick and Naomi at Hokkaido Outdoor Adventures, and their unconditional generosity and access to buses, trailers and any­thing we needed, our trip could not have run smoother.

The creeks on the island of Hokkaido are short, steep, tight and technical. Most of the Class Vs are indeed “park-and-huck” waterfalls set in pristine locations, but there are still many unexplored canyons. The experience was quite the opposite from what I had expected.

The island of Hokkaido is mostly unpopulated (outside Sapporo) and the mountains remind me of those in the north­eastern U.S., but studded with cherry blossoms in spring.

The rivers, when they aren’t  in flood, are emerald green. I have only seen rivers similar to these in Switzerland and Slovenia, and I am looking forward to revisiting this surprisingly stunning corner of nature.

Sam Drevo is a world-class kayaker who has been paddling since he was 9 and competed in his first World Championship at age 15. He now operates Northwest River Guides, a kayaking/rafting outfitter and school in Portland, Oregon. When not in the Pacific Northwest, he can be found on kayaking expeditions around the globe, logging some first descents along the way. Web site: www.northwestriverguides.com

Eric “Wick” Southwick is the two-time U.S. National Freestyle Kayaking Champion and the first ever to win back-to-back World Men’s Freestyle K-1. He’s earned numerous prestigious awards including the silver medal of the European Cup and the Japan Open.

Pat Keller is a 16-year-old kayaking freak who has been compet­ing since he was 11, taking three junior world titles at age 14. Keller’s a solid extreme/creek kayaker and all-around nice kid who came to Japan for the experience.

Clay Wright is a kayaking legend known around the world and is on most extreme kayaking videos dating back to the first days of pad­dling. Wright is a World Champion Squirt Kayaker and U.S. Freestyle Team Member since 1995. He has first descents in seven states and five countries.

Nate Nash is an avid kayaker who started 540 Productions, a small film company that made several extreme kayaking videos; the last two being the “Player Series” featuring the above kayakers. He is now with Matchstick Productions, specializing in extreme skiing videos and win­ning several awards. Web site: www.skimovie.com

Patrick O’Keeffe is the owner and operator of Hokkaido Outdoor Adventures (HOA). A keen kayaker in his own right, Patrick has first descents in Laos, Myanmar and here in Japan. Originally from Australia, Pat enjoys introducing Hokkaido’s best to some of the world’s top adventure athletes, as well as regular outdoor enthusiasts looking for a great time. Web site: www.rafting-hoa.co.jp